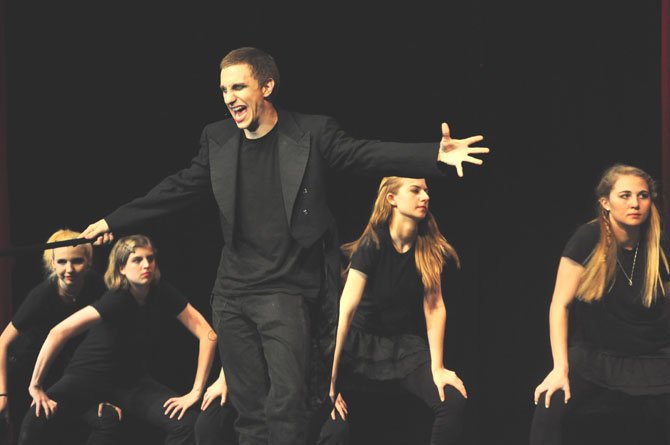 Max Johnson leads a performance of "Willkommen" from "Cabaret" at McLean High School’s concert Friday, May 25, which featured a variety of songs from Tony Award-winning musicals. Photo by Alex McVeigh.

McLean — McLean High School combined the best of stage and song last weekend, as they presented a concert of Tony Award-winning songs over two nights. Numbers from more than a dozen musicals were featured, everything from intimate duets to rousing group numbers. 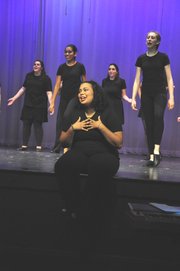 The idea came from one of the Opera Scenes class, who also helped coordinate performers’ movements onstage as part of their final project. Schoolwide auditions were held, attracting many students from both the theater and music departments.

"It was a huge collaborative effort, and very much a student-run show," said Linda Martin, who runs the school’s choral groups. "It was definitely an interesting process putting it all together, and it certainly was a hectic schedule, but everyone came through to put on a terrific show."

Standards such as "Grease," "Cabaret," "Wicked" and "Les Miserables" were featured, as well as more modern shows like "Avenue Q" and "Spring Awakening."

"Everyone came to the table with their favorites, and we tried to do as many as we can," said junior Max Johnson. "I really enjoyed singing ‘Willkommen’ from ‘Cabaret’ as the Emcee. It was such a creepy, gritty role."

For seniors Emma Leiken and Danielle Wertz, the show was bittersweet. Best friends throughout high school, they’ll be heading their separate ways in the fall, so this was their last show together at McLean.

McLean High School students stand for a final curtain call after their performance of songs from Tony Award-winning musicals Friday, May 25.

The two got to share the stage for a duet, singing "For Good" from "Wicked."

"It was a little emotional singing on stage together, a song about two friends who are about to say goodbye," Leiken said. "I know I teared up a bit, even while singing."

Many students in the show said they enjoyed exploring the different types of songs and variety of numbers.

"It was fun squeezing in so many different moods and flavors from so many different plays into one show," Wertz said. "Usually you spend a show getting in the mindset of one character and staying there, but with this show you had to be all over the place."