‘Growing up with Sarge’
Votes

‘Growing up with Sarge’

Potomac — “For most of my life, it was enough for me to feed off his energy — he carried all of us on his wave. He kept us believing; he kept us hopeful. When he walked into a room, you just felt better. You felt ready for the day.” — from “A Good Man,” by Mark Shriver. 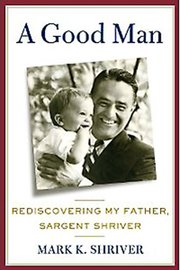 “A Good Man,” by Mark Shriver

After reading Mark Shriver’s recently published book, “A Good Man” “Rediscovering my Father, Sargent Shriver,” I felt that I had been given a gift. I closed the book energized. I wanted to stand taller, think deeper, love stronger, forgive easier and readdress my faith, both in myself and my religion.

At least that is how the book affected me.

Sargent Shriver can be remembered as the affable gentlemen who showed up at Flaps restaurant in Potomac, cheerful and chatting, even after his mind began to wend its way into that empty space called Alzheimer's. Sarge, as he liked to be called, lived a life of epic proportions, but at heart he was a humble man. Now his son has written his own story and it is a tribute to his father’s love, faith and enduring sense of fairness.

In example after example, Mark shows us how Sarge cared, how he loved both his family and mankind unconditionally. And, in this remarkably self-effacing memoir, Mark let us in on how his father lived a life devoted to his faith and how he inspired his son, as the words below reveal:

“He was a disciplined believer, practicing faith with a military resoluteness. I saw it every day I was with him, though I couldn’t articulate it this concisely and — at least for me — usefully until after he died. Still, half a grasp was better than no grasp at all, and Dad’s faithfulness helped make my boyhood enchanting and the darker days of my adolescence bearable.”

Sarge and his remarkable wife Eunice were family friends of many years, so seeing Sarge through Mark’s eyes gave me another opportunity to learn about a man that I admired and respected for so long. There are chapters I want to read again and there are ones that inspire by showing how Sarge’s compassion for his son remained paramount over criticism or correction — a lesson in restraint.

How did he do it, Mark marvels as he writes from the standpoint of being a young father himself. Here was a man who created the Peace Corps from scratch, traveled the world for Special Olympics, was the 1972 Vice Presidential Democratic nominee, read voraciously, attended mass daily, and yet, paramountly, kept his family close at hand.

“Dad was a different type of manly father precisely because he forgave us publicly for our transgressions and didn’t worry about their effect on his career; because he was confident enough as a man to let Mom break the cultural stereotypes of the time about how a mother and wife should act; because he judged his success as a father by our happiness and not by any ego boost he’d attain from our achievements, or his own.”

Mark’s memories of his “life with Sarge” are at times amusing, often historical and always engaging as when the young Mark reflects on sometimes being drawn into the Kennedy milieu whether he wanted to be or not. It is another look at history, with dates and names that I forgot and events that come back to me as I read them from his perspective.

It is an absorbing reflection on Mark’s upbringing and a loving insight into the personal life of a remarkable man, R. Sargent Shriver.

“He wrote me a letter almost every day of my adult life, many by hand, most typed. Some I read quickly; some I put in a file to be read later and never got back to. I had not mined all this material, which could have enriched my own outlook on life. His life was a treasure trove of moral examples and ethical inspiration, but in my hustle and bustle, I had failed to identify this spiritual guide living right before my eyes.”

I knew Mark had a way with words when he gave the eulogy at Sarge’s funeral. But, as I read his book, I became even more engrossed in the prose he called upon to thoughtfully depict his father through coming-of-age eyes. It is a must-read memoir.

Mark Shriver will speak and sign his book on Sunday, June 3 at Our Lady of Mercy Catholic Church, 9222 Kentsdale Drive, Potomac, from 12-1:30. All are welcome.