Strike Up the Band!
Votes 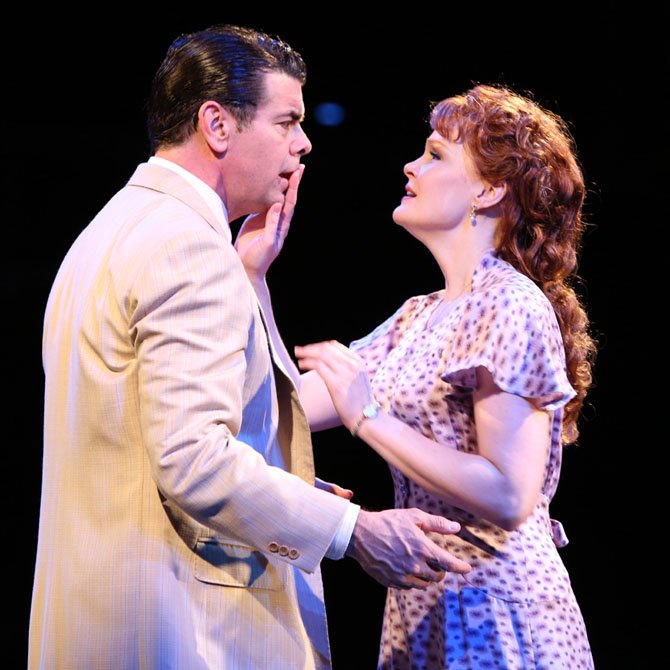 (L to R) Burke Moses as Harold Hill and Kate Baldwin as Marian Paroo in Arena Stage at the Mead Center for American Theaterâ€™s production of The Music Man May 11-July 22, 2012. Photo by Joan Marcus. Joan Marcus

Set in River City, Iowa, in 1912, “The Music Man” tells the wholesome tale of charismatic conman Harold Hill, who poses as a boys' band leader to sells instruments and uniforms to naive townsfolk before skipping town with the cash.

Prim librarian and piano teacher Marian Paroo is on to him, but falls in love with Hill just as his band leader sham begins to unravel.

In the iconic role of Harold Hill is Burke Moses, one of the most charismatic actors to take to Arena Stage — or any stage, really.

Moses easily carries the show with a bravura performance, perfectly capturing the Broadway musical ideal of the handsome, sexy yet tender leading man.

His counterpart is the multi-talented Kate Baldwin, who brings a touching vulnerability to the role of Marion Paroo while at the same time displaying the fortitude to match Moses's Harold Hill. Together, they bring their tender romance and the entire play to a palpable crescendo.

Ian Berlin makes his professional debut as Winthrop, adding to the strong performances of Will Burton as Tommy Djilas and the always magnetic Nehal Joshi as Marcellus.

“The Music Man,” winner of five Tony Awards including Best Musical, is a crown jewel in Arena's glorious season. If you're looking for the perfect family vacation, look no further than a trip to River City.