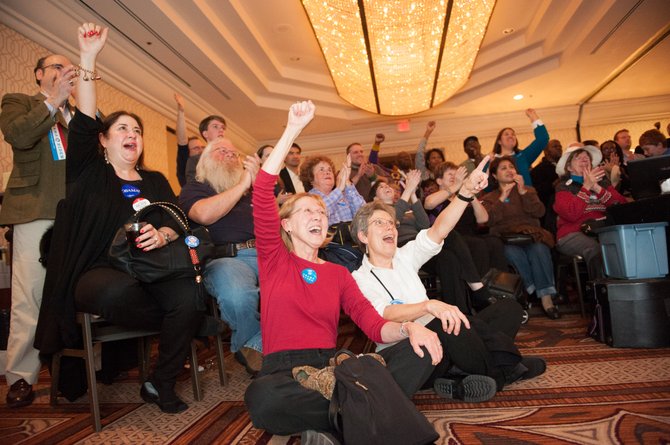 Reaction to the announcement that President Barak Obama has been reelected at the Fairfax County Democrats Victory Party on Nov. 6. Photo by Deb Cobb.

Sisters Maryam and Mondana Nicksolat of McLean celebrated with more than 200 other enthusiastic Democrats at the Tysons Sheraton on election night. 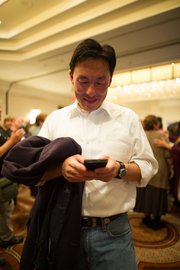 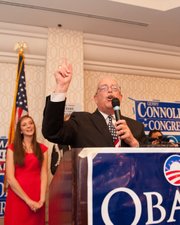 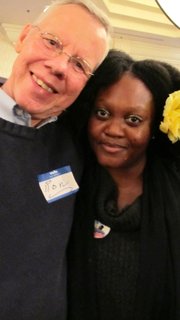 Ron Wiersma of Springfield and Caroline Smith of Reston celebrated with other Democrats at the Sheraton on Tuesday. “Look around you. This is America,” Smith said. “Black, white, Asian, Latinos, men and women, young and old….This is our America.”

In a bitter and historically expensive battle, President Barack Obama defeated Gov. Mitt Romney, winning a second term Tuesday after grabbing the key swing state of Virginia after midnight. With the addition of the Commonwealth’s 13 electoral votes – as well as those of Colorado, Iowa, New Hampshire and Wisconsin – Obama sailed over the electoral cliff with the critical 270 electoral votes he needed for victory.

More than 200 Democrats gathered at the Tysons Sheraton Tuesday evening – some cautiously optimistic, some nervous – about the Democrats’ chances of another four years for Obama in The White House. Mondana Nicksolat, an Obama volunteer from McLean, said she was so nervous about Obama’s chances for victory, “I feel like I’m getting ready to take a final exam….I’m nervous. I’m not sure he will win,” Nicksolat said. But as the evening wore on, Nicksolat became more optimistic.

“Obama shouldn't be called a politician,” she said. “He is a human being. He has a lot in common with the American people. We are not all rich; we all did not go to elite schools; some of us are immigrants and we’re Americans. Obama is with us.”

At close to midnight, the Sheraton crowd erupted in cheers, hugs and tears when news networks projected the win for Obama. “The country and women are safe for four more years,” one guest shouted. According to the Fairfax County Board of Elections, Obama won the county with nearly 60 percent of the vote.

It was one of the most competitive and closely-watched Senate races in the nation, but after 17 months of brutal campaigning, former Virginian Governor and DNC Chair Timothy M. Kaine grabbed the seat of retiring U.S. Senator Jim Webb from former Governor George Allen. Kaine won 51.85 percent of the vote over Allen’s 47.97 percent with 100 percent of the state’s 2588 precincts reporting, according the Virginia State Board of Elections.

“Tonight our voters also sent a message about our politics. They want more functional government,” Connolly said, standing with his daughter and wife at the Sheraton. “They don't want more rabid, partisan rhetoric as a substitute for real solutions to real problems.”

Connolly said he was honored “to have been reelected, by my widest margin ever, and to have received the thrust of our voters to represent them for the next two years. On their behalf I will fight for the values we share while seeking common ground to move our country forward.”

Connolly also displayed his trademark wit when he told the crowd he had another announcement: “CBS News just called it for Tim Kaine….Not so fast, Tea Party!”

U.S. Rep. Frank Wolf (R-10), the most senior of the 11 members of the House of Representatives from Virginia, won his 17th consecutive term on Tuesday. This year, Wolf faced a challenge on two fronts: Democrat Kristin Cabral and Independent Kevin Chisholm fought hard to take his seat. Wolf won 58.71 percent of the vote (194,817 votes) compared to Cabral’s 38.38 percent of the vote (127,355 votes) with 192 of 195 precincts reporting at 1 a.m. Wolf sits on the powerful House Appropriations Committee, where he is the Chairman on the Commerce-Justice-Science subcommittee. In addition, he is the co-chairman of the Tom Lantos Human Rights Commission, a bipartisan organization made up of more than 200 Members of Congress who work together to raise awareness about international human rights issues.

U.S. Rep. James P. Moran won a 12th term in Congress, easily beating his Republican opponent J. Patrick Murray with 63.42 percent (174,974 votes) of the vote over Murray’s 31.5 percent of the vote (86, 910 votes). A senior member of the Appropriations Committee, Moran serves as the Ranking Member on the Subcommittee on the Interior and Environment and also serves on the Defense and Military Construction Subcommittees. Throughout his two decades of service in the House of Representatives, Moran has championed regional transportation solutions, the environment, women's issues, technology, fair and open trade, and fiscal discipline. He is also well known for his efforts to protect federal employees and military retirees.