Chance for Compromise on Brickyard Site? 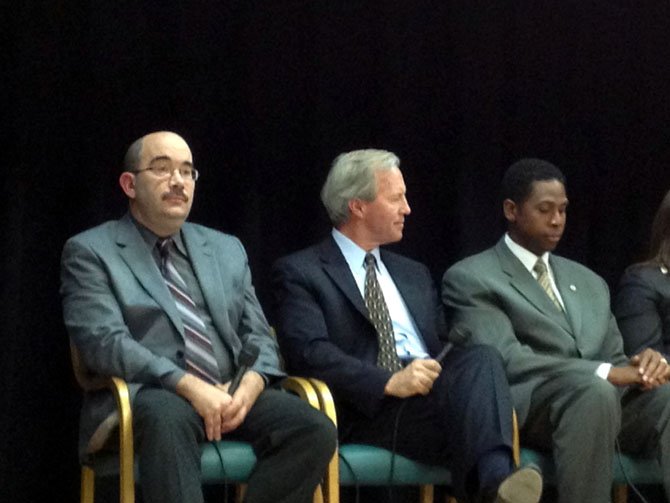 Potomac — After nearly two years of edict and opposition concerning a 20-acre “future school” site on Brickyard Road, a town hall meeting in Potomac last week with County Council offered a glimmer of hope for advocates of the organic farm.

“The way this has unfolded is not OK,” said County Council President Roger Berliner on Wednesday, Nov. 7 at the Potomac Community Center.

Chance for Compromise on Brickyard Site?

After nearly two years of edict and opposition concerning a 20-acre “future school” site on Brickyard Road, a town hall meeting in Potomac last week with County Council offered a glimmer of hope for advocates of the organic farm.

At the rare town hall meeting that featured eight of the nine members of County Council, councilmembers expressed strong opinions about the ongoing conflict over the Brickyard Road organic farm.

“The way this matter has unfolded has been ugly and costly to everyone involved,” said five councilmembers in a letter handed out at the meeting. “We do not think this result in necessary or inevitable.”

“This turmoil has not only tainted our constituents’ opinion of representative government, but it has also completely shut down communication,” wrote George Leventhal (D-at large).

Sophia Maravell asked, now that council has called for compromise, what assurances are there that the County Council and the public are involved in the process.

The councilmembers wrote to County Executive Isiah Leggett and Board of Education President Shirley Brandman that the current stay in the court process in Montgomery County Circuit Court offers a “time out” in order “to consider fresh approaches and a transparent process to meeting each of the legitimate needs of our community that has been raised by this divisive debate.”

Montgomery Soccer, which successfully responded to the county’s request for proposals to build soccer fields on the site, had planned to begin development of the soccer fields this fall.

“We deeply regret the continued anxiety that this issue has caused our constituents and the uncertainty to Montgomery Soccer Inc., which successfully applied to the RFP,” councilmembers wrote. Representatives of MSI did not speak at the meeting.

The County Executive didn’t attend the meeting. Patrick Lacefield, spokesman for the County Executive, said in response to an email asking for reaction to the council letters: "There is no change in the county's position that public land should be used for public purposes, as called for in the Potomac Master Plan unanimously approved by the County Council."

But no one at this stage of the battle is assured that its position will be upheld by the court system.

“The court’s ‘stay’ very clearly indicates that none of the stakeholders are guaranteed a victory in this contest,” according to the letter from the councilmembers. “Bringing the best of Montgomery County to bear, we believe it may be possible to find common ground and put this matter behind us.”

NICK MARAVELL has leased the 20-acre site from the Montgomery County School Board for more than 30 years, running an organic farm, which produces heirloom GMO-free corn, and soybean seed. More recently, Sophia Maravell has run the Brickyard Educational Farm on the site as well, bringing in busloads of school children to learn about farming.

“This turmoil has … tainted our constituents’ opinion of representative government.” — George Leventhal

Nearly two years ago in March 2011, Nick Maravell, neighbors and civic organizations in Potomac learned that Leggett had already decided to take control of the 20-acre school property on Brickyard Road to turn it over to a private organization for development into soccer fields. The Board of Education voted with only a few days notice to lease the property to the county for that purpose.

Local food advocates, neighbors and civic associations have expressed outrage that there was no public process for the decision, including filing several lawsuits. They have asked to turn back the decision and begin a transparent process with public input and discussion.

The civic organizations say that the county violated the public’s right to have access to information about the government’s affairs concerning the conversion of Brickyard Road farm site into soccer fields.

“As we become more cognizant of the link between nutritional eating and public health, we should proceed more thoughtfully in matters of local sustainable food systems,” Leventhal said.

Marc Elrich (D-at large) said that while Montgomery County does have farmland in the Agriculture Reserve and programs that support agriculture, it does not have many resources in organic farming. One reason the Brickyard property is so important is that it is insulated away from other farmland so cannot be infiltrated by genetically modified pollen.

More than 100 people attended the meeting on Nov. 7, and while the Brickyard organic farm was the hot topic, residents brought questions about many other issues including deer management, speed cameras and pedestrian safety.

AT PRESSTIME, The West Montgomery County Citizens Association and other members of the Brickyard Coalition, planned to file a legal complaint against defendants Montgomery County, County Executive, the Board of Education and Montgomery Soccer, Inc.

"It is outrageous when county citizens are forced to seek legal recourse for what they should have had by right in the first place," said Ginny Barnes of the West Montgomery County Citizens Association. "We've worked for 18 long months to restart a process that took place in secret and without any public knowledge. … They've left us no other recourse than to turn to the courts."