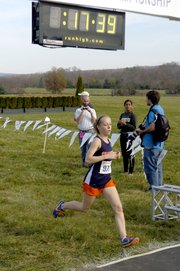 Caroline Alcorta was no longer content with finishing eighth in the state. Maddie Wittich was chasing a four-year dream.

Each of the two West Springfield harriers entered Saturday’s VHSL state cross country meet with her own motivation to improve. The result was a happy pair of Spartans standing on the podium at Great Meadow.

Alcorta, a junior, finished AAA state runner-up and Wittich, a senior, earned all-state honors with a 12th-place finish on Nov. 10. The duo helped West Springfield finish fourth as a team.

Last year, Alcorta, then a sophomore in her first season competing in cross country, placed eighth at the state meet. She was in position for a better finish, but her body gave out and she collapsed near the finish line. Alcorta was able to recover and finish with a time of 18:35.

This year, Alcorta said she’s improved her race preparation, including practicing better nutrition. The result was a time of 17:45, 21 seconds behind Lake Braddock’s Sophie Chase, who won her second consecutive state championship.

Alcorta finished no worse than second at each race in which she has competed this season.

Wittich finished 54th at the state meet as a freshman and 35th during each of her sophomore and junior seasons. Her goal was to crack the top 15 and earn all-state honors. On Saturday, Wittich posted a time of 18:30 and finished 12th.

“It’s been my dream these past four years. Every year we stand out here and look at all the girls standing up there [on the podium] and I’ve always wanted to be one of them, and this year I am.”

Wittich said her role model for reaching her goal was former West Springfield teammate Alex Watt, who reached the podium with a 15th-place finish as a senior in 2009 when Wittich was a freshman.

“It’s been my dream these past four years,” Wittich said about earning all-state. “Every year we stand out here and look at all the girls standing up there [on the podium] and I’ve always wanted to be one of them, and this year I am.”

Along with the top 15 individuals, the top three teams are honored at the podium. Lake Braddock won the AAA girls’ state championship with a score of 47. Oakton and Midlothian each finished with a total of 101, but Oakton finished runner-up due to a sixth-runner tiebreaker.