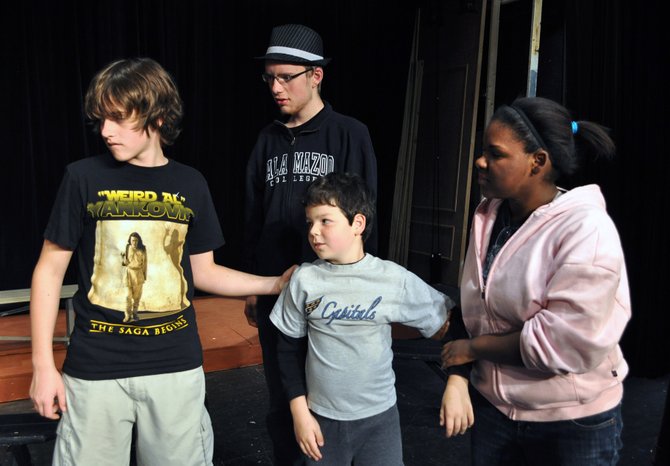 From left, Blake Phillips as Ralph Herdman, Ryan Clark as Leroy Herdman, Brendan Dure as Charlie Bradley, and Jody Parker as Imogene Herdman in rehearsal for the Providence Players of Fairfax production of “The Best Christmas Pageant Ever.” Photo by Chip Gertzog

A delightfully boisterous, but controlled chaos lit up a recent rehearsal of the Providence Players' next production, the family-friendly holiday treat "The Best Christmas Pageant Ever." Over a dozen joyously energetic middle school and high school students were rehearsing their roles under the watchful eye of Director Beth Whitehead (Mantua).

Written by Barbara Robinson, "The Best Christmas Pageant Ever" has been a magazine article, a book and a play. It is a comic, heartwarming tale focused on children considered some of the most incorrigible in town. Then they are cast in the local church’annual Christmas pageant.

Fully expecting the worse, the entire town shows-up, just waiting to see an expected car-crash. Will the Christmas pageant be ruined? Or will some kinder, gentler virtues somehow surface?

Whitehead noted that there was an open call to cast the 30-actor production. It includes about 20 children; over 50 children auditioned for the roles.

Blake Phillips, a freshman at Woodson High School greatly likes the theater. "I can express myself in a theater production. I get to show feelings and emotions as an actor." He wanted to be in "The Best Christmas Pageant Ever" since "it is a unique show, family-centered, kids-centered show. It can teach good lessons. And the audience can watch children transform as they hear the Christmas Story for the first time. They truly begin to change before the audience's eyes." 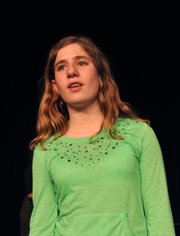 Hazel Thurston as Beth Bradley in the Providence Players of Fairfax production of “The Best Christmas Pageant Ever.”

Hazel Thurston has a very key role, she narrates the evening's entertainment.

She is from Kenmore Middle School in nearby Arlington. Thurston loves theater and being in this production. "There are lots of funny lines. . . . And there are good lessons to be learned. Don't judge people by what you first see on their outside; there may be great kindness and niceness hidden away longing to get out."

One of the early members of the Providence Players, now celebrating its fifteenth year, is Dave Schwartz performing as a reverend lending a hand to help the children understand the Christmas Story. "It is a fun show with so much energy. Really, the whole family will enjoy it."