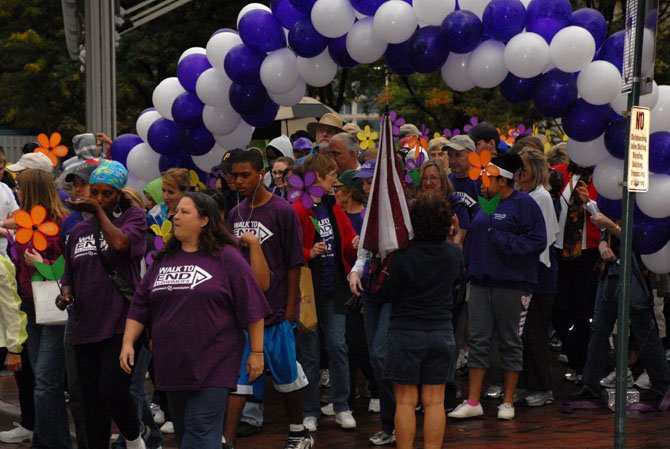 More than 1,200 participants signed up to participate in the Alzheimer’s Association’s Walk to End Alzheimer’s held at Reston Town Center on Sunday. Photo by Amiee Freeman.

As participants gathered at the pavilion at Reston Town Center Sunday in preparation for the Alzheimer’s Association Walk to End Alzheimer’s, dark clouds began to roll in and many of those present looked skyward. Masters of ceremony Meteorologist Bob Ryan of ABC7 and Bob Madigan of WTOP’s Man about Town took the stage to kick off the event just as rain began to fall. Ryan summed up the atmosphere under the pavilion by saying that “a few wind gusts and a few drops of rain have not dampened any enthusiasm.”

According to Susan Kudla Finn, CEO of the National Capital Area chapter of the Alzheimer’s Association, nearly 1,200 had signed up to participate in Sunday’s walk, “breaking records on attendance and enthusiasm,” she said. Participants were not required to pay to walk, but were encouraged to fundraise. Alzheimer’s Association Vice President of Development Susan Cherney said that at the start of the walk $153,000 had been raised. Sunday’s walk at Reston Town Center was the third of six walks held in the DC metropolitan area. 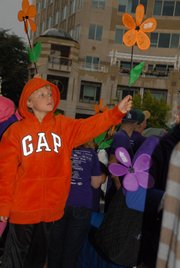 Eli Sutton of Leesburg holds up an orange flower to indicate support for Alzheimer’s research and advocacy. Sutton participated in the walk with his mother Wendy Sutton of Lighthouse Healthcare, which provides services to people with Alzheimer’s.

THE GOAL of the walk, said Cindy Schelhorn, director of communications for the association, was to raise awareness about the disease, reduce the stigma surrounding the disease and to raise funds for research. “Stigma prevention is really perhaps the most important goal here tonight,” said Schelhorn. “Nearly a third of those with the disease keep it secret out of fear. We need to increase awareness about this disease and promote advocacy.”

Many of those present at Sunday’s walk knew all too well about the complexities surrounding Alzheimer’s. Participants were given decorative flowers that identified their connection to Alzheimer’s. Those with the disease held blue flowers, those who were caregivers held yellow flowers, those who had lost someone to the disease held purple flowers and those who supported further research and advocacy held orange flowers. In looking over the crowd, there appeared to be an even mix of flower colors, suggesting the various ways Alzheimer’s had touched the lives of those present.

Kim Woods, Sharon Harvey and Mike Harvey participated in Sunday’s Walk to End Alzheimer’s in memory of Claude Harvey, who was diagnosed with Alzheimer’s 13 years ago and died as a result of it on Saturday.

For Mike Harvey of Arlington along with his mom, Sharon Harvey of Ashburn, and sister, Kim Woods from West Virginia, the reason to be involved in the walk was in the foremost of their thoughts. They were walking in the memory of Claude Harvey, Mike and Kim’s father and Sharon’s husband, who had passed away just the day before. Mike carried with him a picture of his father in his naval uniform. He explained that his father was first diagnosed with Alzheimer’s in 1999 and lived with it for 13 years before succumbing to the disease on Saturday. “We are participating in this walk to make people realize that Alzheimer’s can affect anyone.”

Vicky Noufal, in the center in purple, along with 20 family members, participated in Sunday’s walk in honor of her mother who was diagnosed with early on-set Alzheimer’s at the age of 52. Sunday was Noufal’s mother’s 60th birthday.

Vicky Noufal of Leesburg was participating in the walk with her family in honor of her mother. As she pinned a sign honoring her mother to her grandmother’s back, Noufal explained that Sunday was her mother’s 60th birthday. “That is why our group is so crazy. We are all—cousins, aunts, uncles, grandkids—here to celebrate my mother’s birthday. It’s very emotional,” said Noufal. Her mother was diagnosed with Alzheimer’s eight years ago at the age of 52.

As Ryan and Madigan along with Alzheimer’s Association staff and Delegate Ken Plum and Supervisor Kathy Hudgins concluded their welcoming remarks, the sky cleared, just as Ryan promised.

THE PARTICIPANTS passed under the purple and white balloon arch and proceeded on a one-mile walk around Town Center. The walk was followed by a candlelight vigil to remember those who had lost their lives to Alzheimer’s.