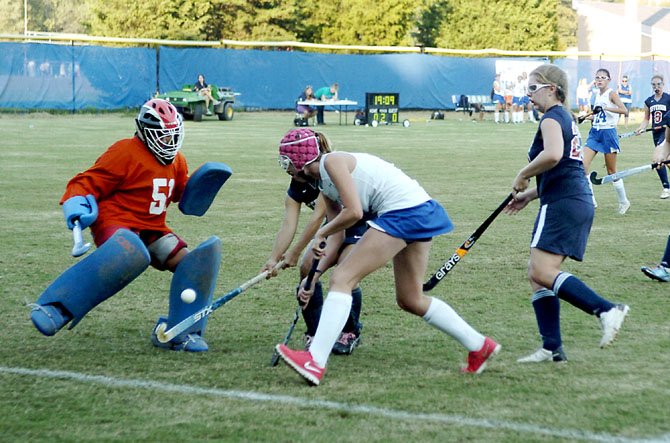 Reston — Thomas Jefferson goalkeeper Priya Seetharaman faced heavy pressure in the first half of the Colonials’ Oct. 5 contest against South Lakes as the Seahawks, thanks to a barrage of penalty corners, were frequent visitors to the circle.

But thanks to sound decision-making and the confidence to act on it, Seetharaman kept South Lakes out of the cage and led TJ to its first Liberty District victory.

“Priya was on her game today,” TJ Head Coach Amanda Kelly said. “She was very confident, she worked very well with the defense [and] you could hear her talking with the backfield. The most successful games are the ones she doesn’t have to do much, but she worked her [rear end] off today. She did great.”

Kelly wasn’t the only coach to notice Seetharaman’s effort.

“The goalie was outstanding,” South Lakes Head Coach Jessica Dowd said. “She single-handedly got to the ball before any of our forwards did, wasn’t afraid to come out, didn’t stay back and, as I told her and her coach, she was just an unbelievable goalie. We had the opportunities. I think some were more directed to the goalie and, knowing how good she was, we weren’t moving her as much and just using each other. The goalie was their saving grace.”

Seetharaman said if she believes she can get to the ball, then she’ll be aggressive and attack it, rather than waiting back to make a save.

“It’s really all about confidence,” she said. “If I don’t feel confident going out for [the ball], then I won’t go out for it. But as long as I’m confident in there and I know I can get the ball, then I will get the ball.”

While the TJ defense recorded a shutout, Peck and Brouckman took care of the offense. Peck scored with 2:22 remaining in the first half, giving the Colonials a 1-0 advantage. With 18:38 left in the second half, Brouckman got the ball in the open field and ripped a shot into the cage for a 2-0 TJ lead.

“The goalie was outstanding. She single-handedly got to the ball before any of our forwards did, wasn’t afraid to come out, didn’t stay back and, as I told her and her coach, she was just an unbelievable goalie.”

“I think tonight our speed really picked up,” Brouckman said. “The way we were communicating and working together definitely started in practice this week and carried over to the game.… I saw the open circle [in the second half] and I just shot as hard as I could. I looked for the corners and it went in.”

TJ improved to 5-7-1, including 1-3 in the Liberty District. South Lakes dropped to 9-6, including 1-4 in the district. The Seahawks won six of their first seven games to open the season.