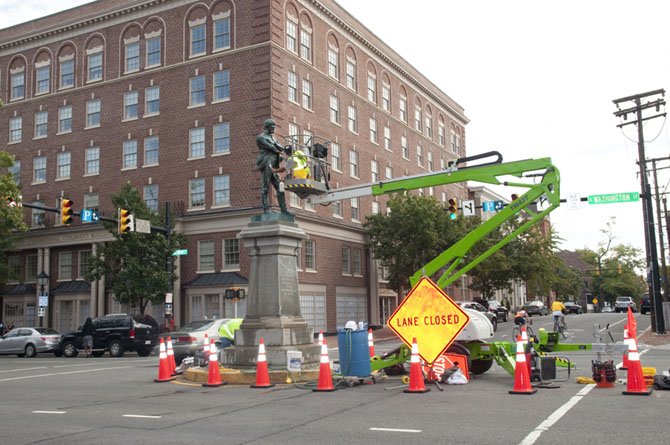 Oscar Bonilla cleans “Appomattox” at the intersection of Washington and Prince streets.

Alexandria — He is called “Appomattox,” fondly known as “Appy,” a lone bronze statue of a Confederate soldier standing on a granite base. Traffic tears by him daily on a small island of land intersecting Washington and Prince streets. His back is turned toward the north, his face stares down in resignation, his arms crossed tightly on his chest. The soldier carries no weapon. He tightly clenches his hat in his right hand; a canteen and haversack hang from his left shoulder.

On a crisp and sunny Saturday on Oct. 6 there is a flurry activity surrounding this Civil War memorial. “Appomattox” is the subject of attention as workers in hard hats cordoned off the traffic island with bright orange cones and bring in their machinery to give the stained and weathered statue a cleaning with a protective finish. 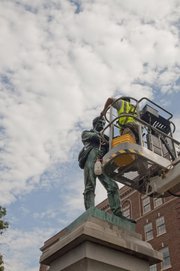 The statue receives a cleaning and a protective finish.

The women of the Mary Custis Lee-17th Virginia Regiment Chapter of the United Daughters of the Confederacy, whose museum and offices are headquartered in Alexandria, provided the funding for the conservation of “Appomattox.” The City of Alexandria was not involved with this preservation effort, nor were any city personnel employed for this cleaning project. Chapter member Debby Mullins said that the statue was initially cleaned with liquid Ivory Soap. An application of a wax substance will provide a protective patina of the bronze statue which is bombarded daily by the vehicle fumes passing by, the residue of roosting pigeons and other birds, and stresses from sunshine and storms.

During the Civil War, or as it was called by the South, the War Between the States, or the War of Northern Aggression, the City of Alexandria was commandeered by Union forces almost immediately in May 24 of 1861. Col. Elmer Ellsworth, a personal friend of President Abraham Lincoln, led the 11th New York Volunteer Infantry Regiment (“Fire Zouaves”) through the City of Alexandria, detaching some men to take the railroad station and others to secure the telegraph office. Ellsworth personally went to the Marshall House, an inn owned by James W. Jackson, to remove the large Confederate flag from its rooftop. As Ellsworth descended the stairs with the flag wrapped around him, Jackson emerged from his room and fatally shot Ellsworth in the chest. Corporal Francis E. Brownell, who had accompanied Ellsworth, immediately shot Jackson, killing him instantly. Alexandria, the old seaport town, became the main reception area for the Union wounded, a federal supply depot, and a campground. Most of its homes, churches and schools became hospitals, prisons and headquarters. Many of the citizens of Alexandria fled before the federal occupation of the city. Those who remained were under military occupation for four more years.

According to Mullins, a contest was announced, and John Adams Elder submitted a plaster model based on the central figure in his painting "Appomattox." The original painting is at the Library of Virginia. The work shows an unarmed figure with his head downcast as he contemplates the privations of four years of war upon the South. The model was approved and M. Caspar Buberi was the sculptor who cast the statue in bronze. The base is made of Georgia granite. The inscriptions part of the pedestal is made of a mix of concrete and marble. The north side of the base reads, "They died in the consciousness of duty faithfully performed." The south side reads, "Erected to the memory of Confederate dead of Alexandria, Va. by their Surviving Comrades, May 24th 1889." The east and west sides bear the names of those from Alexandria who died during the Civil War.

The dedication ceremony was held on May 29, 1889. There was a great crowd at the ceremony attended and directed by Fitzhugh Lee, the governor of Virginia then and a former cavalry major general for the CSA. Former Confederate General Joseph E. Johnston also attended the ceremony.