A Statue with 100 Names
Votes

The confederate statue in Alexandria recalls city’s past, restoration planned to ensure its future. 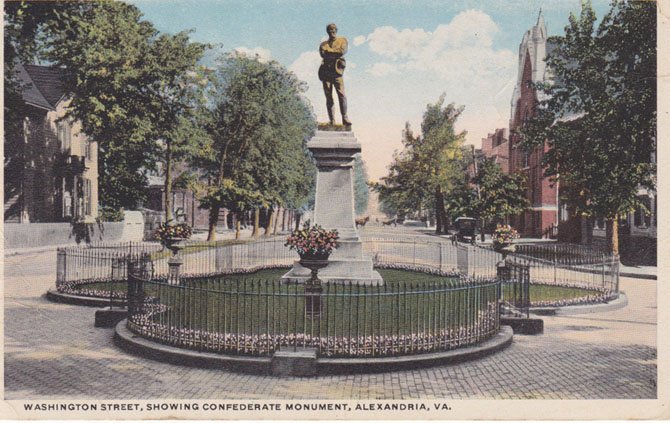 The confederate statue in Alexandria was commemorated on May 24, 1889, and was placed symbolically where Alexandria’s young men marshaled before leaving the city in the face of overwhelming Union forces.

Alexandria — The Battle of Antietam was fought on Sept. 17, 1862, and marked the single bloodiest day during the U.S. Civil War. Over the course of the battle, nearly 23,000 soldiers lost their lives. Among the units that fought for the Confederacy was the 17th Virginia Infantry regiment, which was comprised of young men from Alexandria.

The Battle of Antietam was not the unit’s first military engagement, but it proved to be a significant military defeat as the Army of Northern Virginia was turned back from fighting on Union soil. In the aftermath of the battle, President Abraham Lincoln took the extraordinary step of issuing the Emancipation Proclamation.

Alexandrians can find a solemn reminder of their historic past at the intersection of South Washington and Prince streets in Old Town. A lone confederate soldier stands, head lowered, atop a list of 100 names. These are the young men who fought and died for their city, state and presumptive country during the U.S. Civil War.

The statue is unique to Confederate art, and its location is symbolic. As veterans returned home following the end of the war, they sought a memorial to commemorate their fallen comrades. Although remembrance markers dot cities and towns throughout the United States, as historian and director of the Fort Ward museum Susan Combey notes, the Confederate statue in Alexandria holds special sway among its peers.

“It is in many ways distinguished from other Confederate monuments in terms of its conception and craftsmanship. A number of different towns throughout the South wound up erecting different types of monuments and memorials for soldiers; most wind up with stiff looking soldiers, at attention, holding a weapon,” said Combey. “The statue in Alexandria is called Appomattox, and he holds no weapon. He’s standing in a pensive pose, contemplating the cost of war. It’s a really impressive piece of public statuary.”

Appomattox is derived from a painting of the same title. When the Robert E. Lee Camp of the United Confederate Veterans held a design competition, John Adams Elder presented a clay model of the statue for consideration. The group unanimously approved Elder’s design, and sculptor Caspar Buberl fixed the soldier in bronze.

The memorial was commemorated on May 24, 1889, and was set in a location of great symbolism for the Confederate veterans. While the intersection of present day South Washington and Prince streets may seem like an impractical choice for the placement of a statue, it was at this spot where Alexandrians, on May 24, 1961, left their hometown and went to war.

“When the Union came in and took over Alexandria they asked the soldiers to surrender. The soldiers said no, but they knew they could not fight because they were facing overwhelming numbers, so the union people gave them so much time and said you have to leave,” said Sherry Browne, a descendent of one of Alexandria’s Confederate veterans. “The statue is where the Alexandrian troops mustered to walk out of town together, the location is very symbolic.”

The statue is slated to receive an intense restoration in the coming weeks thanks to private funds raised through the Mary Custis Lee - 17th Virginia Regiment Chapter of the United Daughters of the Confederacy. Abrasions in the base of the statue will be smoothed out, and sections will be remortared. The bronze plaque and statue portions will undergo heating and waxing, with all preservation work to be completed on location.

There are many resources available for investigating Alexandria’s past. The Lyceum museum hosts a special exhibition on life in occupied Alexandria, the Barrett Branch library and the Mary Custis Lee-17th Virginia Regiment Chapter of the United Daughters of the Confederacy all have special collections. Historic maps, photos and documents can be purchased at the Old Colony Shop on 222 South Washington Street.

When a truck crashed into the statue in the late 1980s, a Confederate time capsule was discovered. Although the artifacts inside did not withstand the test of time, what remained immovable was the location. When the statue was taken down for repairs, political groups sounded off against its return. Virginia state law, however, protects the location.

“The veterans were very sharp, they knew the political climate would change, and so they helped pass a state law where the statue would remain forever at that spot,” said Don Hakenson, a local Alexandria historian and author of “This Forgotten Land.” “It’s very important to realize during the Civil War Alexandria voted over 80 percent to leave the Union. One hundred Alexandrians lost their lives, and their comrades placed the statue there so they would be remembered.”

“Some people take offense, it’s a Confederate statue, but it’s historically important,” said Gary Eyler, owner of the Old Colony Shop. “It’s an unusual obstacle, but adds a charm to the city.”