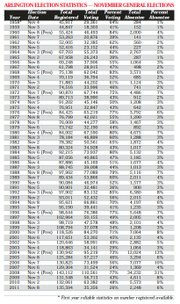 Election officials in Arlington are predicting another record-breaking turnout for absentee ballots, which have been dramatically increasing in recent years. The last presidential election in 2008 was the high-watermark, with the number of absentee ballots almost tripling compared to 2004. Now, as Election Day approaches, the Office of Voter Registration is buzzing with activity.

“Welcome to our hubbub of activity,” said Registrar Linda Lindberg one recent afternoon.

“We have voters who have returned email ballots, and I’m just trying to clarify that they have requested an email ballot,” said Cheryl Scannell, absentee voting manager. “Then I’m going to scan it and check it in.”

POLITICAL PARTIES and candidates have been urging supporters to vote absentee with increasing frequency in recent years, as voters have become more aware of the option. About half of the absentee ballots are mailed into the Arlington registrar and about half are cast in person. For campaigns trying to get out the vote and reach a numerical goal, confirming a supporter has already cast an absentee ballot is a way to devote resources efficiently.

“We want those votes in the bag,” said Mike Lieberman, chairman of the Arlington Democratic Committee. “It’s one more voter we don’t have to contact the weekend before the election.”

Unlike other states, Virginia has been reluctant to open up the process to early voting. Those wishing to cast an absentee ballot are supposed to have a reason for wanting to vote before Election Day, and applications include a long list of potential reasons for casting an absentee ballot. Recent efforts to allow early voted were defeated in 2006 and 2007.

“Who’s really checking that stuff anyway?” asked Kyle Kondick, analyst with the Virginia Center for Politics. “There’s a dozen or so reasons, and I think voters have an increasing sense that it’s a great way to avoid lines on Election Day.”

RECENT YEARS have seen a number of problems or potential problems that may have led to the increase. During the presidential preference primary in early 2008, for example, the region was hit with an ice storm that led to massive traffic delays. Attempts to keep the polls open later were unsuccessful, and hundreds of voters were unable to cast their ballots. Later that year, the expectation of a high turnout on Election Day caused widespread speculation that voters would have to wait in long lines on election day.

As the number of absentee ballots increases, so does the importance of the absentee vote, which is counted as its own precinct in election returns. A good example of the importance of absentee votes is the hotly contested U.S. Senate race between Republican George Allen and Democrat Jim Webb. As election returns were posted, it looked like Allen was ahead. With most of the precincts reported, Allen was more than 1,000 ahead. But the Arlington absentee precinct had yet to be tabulated, and the Fairfax County absentee precinct had yet to be tabulated. By the time all the absentee ballots had been counted, the election turned to Webb and Allen conceded defeat.

“These ballots need to be hand counted,” said Lindberg. “And that takes considerably longer because we are talking about an increasing number of votes.”

That means that election results may become increasingly delayed as more and more people move to absentee balloting, increasing the odds that the outcome of contested races might not be known for a day or two after the election.