Voice Heard, Commitments on the Way 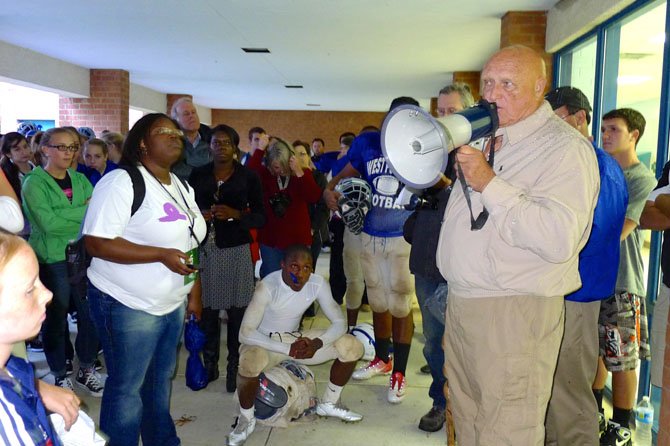 Mount Vernon — Playing on uneven athletic fields that have rocks and broken glass, West Potomac High School football and lacrosse players are referred as “West Poor” by their opposing teams. This is not OK with Mount Vernon District Supervisor Gerald Hyland.

“What I’ll do is knock him on his butt,” said Hyland, who recalled that he played football on a field just like that years ago. 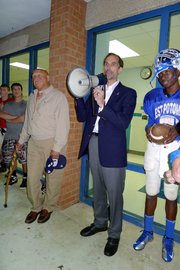 “I’ll say this unequivocally,” Hyland said at the meeting with parents, students and VOICE leaders at West Potomac High School on the rainy evening of Oct. 15. “We’re going to find a way to have artificial turf fields at both West Potomac and Mount Vernon. That is going to happen.”

During the past few months, Hyland has been working with a group called VOICE (Virginian Organized for Interfaith Community Engagement), Fairfax County Board Supervisor Jeffrey McKay, the Park Authority and School Board to address the need for more after-school programs, better recreational facilities and transportation home from after-school activities for youth along lower-income Route 1 community.

Hyland said he’s committed to looking for proffers from developers, and some developments are occurring. He has met with a developer who’s building a residential development along Huntington Avenue, and they’ve already had an agreement towards a half-field. “A number of other developments that will occur,” said Hyland. “When the developers meet with me, I will be asking them to do the same thing to help us contribute funds towards artificial fields. But it’s going to take a little time to get all the money we can gather.”

Since the launch of the campaign on June 11, VOICE held tours and had Hyland and McKay coming to update progress. They worked with a local soccer league on how to engage more youth in after-school activities. And they scheduled a meeting with a representative from Costco, trying to make an agreement to carve out a space for children to play in Murraygate Village and Audubon.

Tuck Bowerfield, rector of St. Louis Episcopal Church and co-chair of VOICE, said it’s remarkable to have people from West Potomac and Mount Vernon high schools working together for the same goal. And they’ve met with Park Authority to secure commitments for improvements at parks such as Muddy Hole and worked on planning a recreational center for youth on Route 1.

“We need to raise $50,000 engineering [cost] for each field,” said Rick Genuario, booster president at West Potomac High School. “That is our commitment — to fundraise, to kick start the engineering of both fields. We need to start looking at that.”

School Board member Dan Storck said there needs to be equity across the school system. He supports Hyland’s idea to have proffers help contribute to the cost of improvements at schools.

“This is a great success,” concluded Bowerfield. “We got full support of the School Board, the County, and the Park Authority. I think this is an outstanding result.”