Future of Golf Course Up for Grabs?
Votes

Future of Golf Course Up for Grabs? 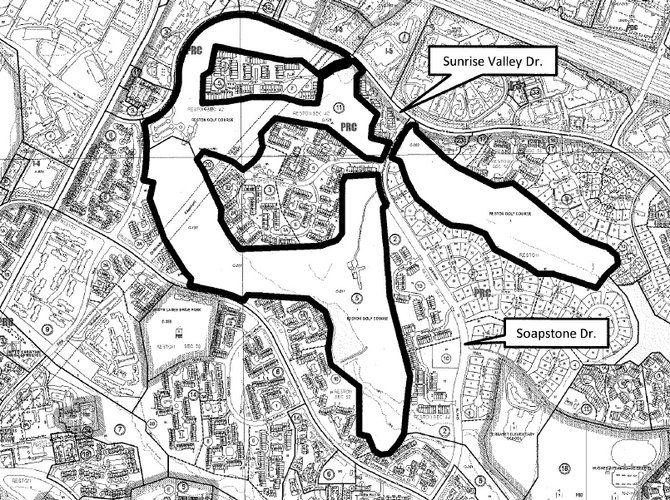 The owners of the Reston National Golf Course have inquired of Fairfax County which development would be possible on the property, which has raised concerns in the local community.

Reston — While Reston National Golf Course is a destination throughout the region and recognized around the country for its Nike Golf Learning Center, its future has become a topic of concern for local residents. The owners of the course, RN Golf Management, requested information from Fairfax County earlier this year on the exact zoning regulations for the property on which the 166-acre course sits.

On April 20, Mark Looney of Cooley, LLP, which is representing RN Golf Management, requested the information, asking for regulations, as well as "confirmation of the process one must follow under the Zoning Ordinance in order to establish uses other than a golf course on all or a portion of the subject property."

IN RESPONSE, RN Golf Management has filed an appeal with the county’s Board of Zoning Appeals, which will be heard at their public hearing Oct. 24 at 9 a.m. at the board auditorium at the Fairfax County Government Center.

They cite various examples, including letters from county staff over the past 20 years, that RN Golf Management believes would allow residential development on the course property.

In the meantime, various community groups have voiced their opposition of any development on the golf course. The Reston Association sent letters to nearby landowners saying that they will continue to advocate that the land remains open space.

"The RA Board feels strongly that redevelopment of this property as anything other than open space would have a significant adverse impact on RA members," the letter reads. "Thus, RA intends to oppose such redevelopment."

Board President Ken Knueven said the RA board will discuss the matter at their Sept. 13 meeting, which the public is encouraged to attend.

The Reston Citizens Association discussed the matter at their Aug. 27 meeting, and released a resolution condemning any potential developments.

"The use of Reston National Golf Course land for any purpose other than open space dedicated to parks, recreation, and/or nature is an existential threat to Reston’s longstanding vision and plan as a diverse ‘planned’ community that should be rejected," the resolution reads.

MANY COMMUNITY MEMBERS say they do not want to lose the golf course at all, and definitely not to additional residential units.

"I’m not a big golfer myself, but I think it’s a fantastic use of the land, it’s open yet not developed and it runs through so much of Reston between Reston Parkway and Wiehle Avenue," said Kirk Smith of Reston, who lives off North Shore Drive near the course. "It’s green space that’s not heavily trafficked, except for the players, and I’d hate to think of it being filled by houses, townhouses or apartments."

A local group, Rescue Reston, has been formed, which is hosting a campaign to save the golf course. More information is available at www.rescuereston.org.