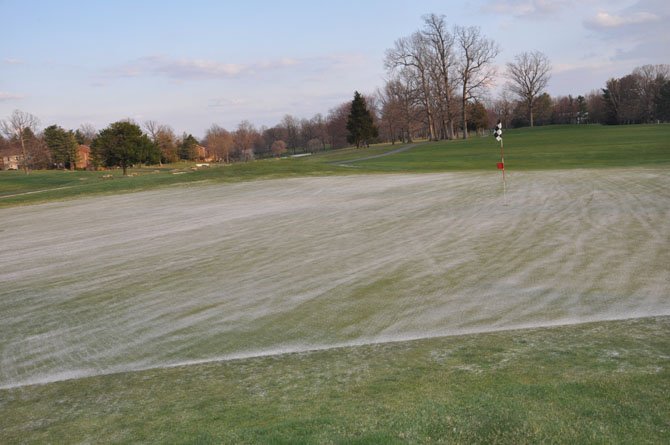 Neighbors and community members are organizing to make sure the golf course is not turned into residential units. Photo by Alex McVeigh.

Donna Robuck and her husband Robert have lived in a house that overlooks the 10th hole at the Reston National Golf Course for the past 14 years. She can still recall: “I walked in the house, walked straight through to the balcony, and me and my husband thought, ‘this is it. This is the perfect house,’” she said. “The very next day my mother-in-law called and asked what the kitchen looked like, and I had no idea.”

Since then, she described living in their house as a dream, but in recent months that dream has been threatened.

“We cannot stand the thought of someone taking away the golf course away from us,” she said. “My husband and I have sunk a lot of money into our town home and we’re waiting for the Metro to come, which will be in walking distance, and hopefully I can retire early. If that dream gets messed up, it destroys our life.”

THE ROBUCKS’ DREAM is in danger due to the Reston National Golf Course owners’ appeal with Fairfax County’s Board of Zoning Appeals to get residential development rights for the 166-acre course.

The BZA will hear the appeal at their Oct. 24 meeting, but until then, residents like the Robucks have organized a community response dedicated to making sure the golf course stays the same.

Rescue Reston, an organization formed a little over a month ago, aims to combat potential development through legal means and through community activism.

“Rescue Reston opposes the redevelopment of 166 acres of land that is, one, a marketing icon that was just named one of the top ten places in the United States to live, two, represents a redefinition of a major part of our town and, three, it dramatically and intentionally, alters a planned community design and a culture that has evolved over the past 50 years,” said John Pinkman, executive director of Rescue Reston. “The RN Golf Management appeal to the BZA indicated that the investors who bought the golf course did not buy the land to operate a golf course. They identified themselves as real estate developers.”

Research by Rescue Reston has been engaging in a campaign that includes sign placement, passing out fliers at public events and personal appeals to John Schlifske, CEO of Northwestern Mutual, the company that Rescue Reston found through public records as being involved in the planning for the golf course property.

The group held a rally Saturday, Sept. 29 near the golf course at the corner of Reston Parkway and Sunrise Valley Drive. Pinkman said this is part of the campaign to spread the word around the community to gather support.

“We’ve received a lot of things asking ‘what can I do? How can I help?’ Not many people can take time off of their day to help. But what they can do is talk to two people, ask them to talk to two people and have those two people talk to two people,” he said. “The public pressure will continue in support of the Fairfax County Zoning administrator at the BZA meeting on Oct. 24, this effort becomes very public. It’s just beginning, we’re not going away.”

THE RESTON ASSOCIATION Board of Directors voted unanimously at their Sept. 13 meeting to hire the law firm of Odin, Feldman, Pittleman PC as special counsel to perform legal services on behalf of the RA.

According to the motion, the law firm will advise and provide counsel with respect to the Reston National Golf Management appeal before the BZA, advocate the opposition of the RA to any use of the property other than a golf course and to prepare for any necessary litigation.

The RA also voted to establish a special committee of the board, to work with RA staff and special counsel on the matter. The committee is made up of Knueven, as well as Directors Donna Miller Rostant, Michael Sanio, Andy Sigle and RA CEO Milton Matthews.

“It’s open space, and many folks bought into Reston because of the golf course, so it needs to stay that way,” Sanio said.

More information on Rescue Reston can be found at http://www.rescuereston.org/.