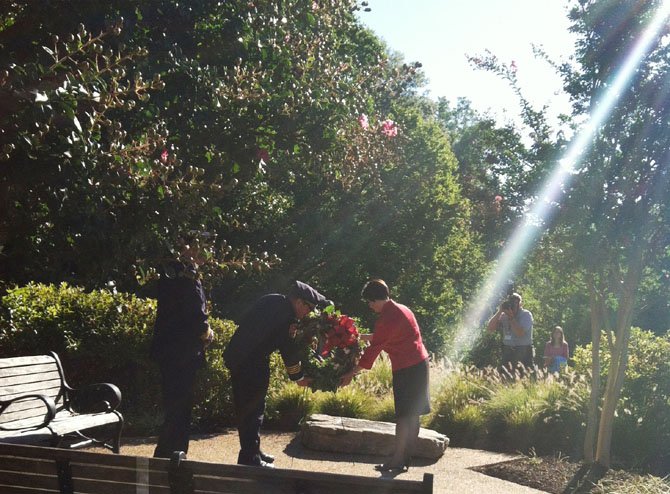 Chairman Sharon Bulova, Fire Chief Ronald Mastin and Police Chief David Rohrer participated in the laying of the wreath at the 9/11 Memorial Grove during a remembrance ceremony at the Fairfax County Government Center the morning of Tuesday, Sept. 11, 2012. Photo by Victoria Ross. 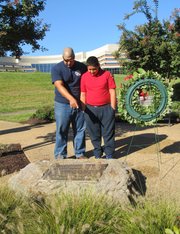 Sergio Nava, of Springfield, a volunteer firefighter with Station 422, stands with his 10-year-old son Giomel at the 9/11 Memorial Grove during a remembrance ceremony at the Fairfax County Government Center the morning of Tuesday, Sept. 11, 2012.

The mournful tone of a single bell tolling three times—once for each site that was struck on Sept. 11, 2001—echoed in the Fairfax County Government Center chambers this morning as community leaders, police, firefighters and citizens gathered to pay tribute to the victims of the terrorists attacks 11 years ago today. 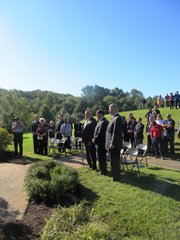 “It was a morning just like this one,” recalled Sharon Bulova, chairman of the Fairfax County Board of Supervisors, as she spoke to nearly 100 guests during the Fairfax County 9/11 Remembrance Ceremony. “We had bright blue skies on a crisp fall day on the morning of our national tragedy.”

“There are times I wish I didn’t know what I know…We lost our sense of security that day,” said Rohrer in his remarks. “But we became more resolute and more unified....My hope is that we have more respect for others, more tolerance and peace. We’re an incredible tapestry of cultures and diversity in Fairfax County, and that’s our strength.” 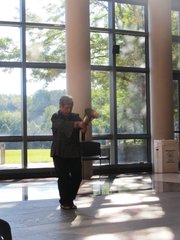 The bell tolled three times, once for each site that was struck 11 years ago by terrorists on Sept. 11, 2001. Paula Harper, a retired employee of the Fairfax County Office of Public Affairs, rang the bell at the 9/11 Memorial Grove during a remembrance ceremony at the Fairfax County Government Center this morning.

After the remarks, the Fairfax County public safety honor guard led a procession to the 9/11 Memorial Grove, where Rohrer, Mastin and Bulova participated in the laying of the wreath.

The site, located on a ridge above the lake behind the government center, is the first U.S. memorial commemorating the attacks on 9/11 built on public space. Fairfax County Tree Commissioner Michael McMahon designed the memorial.

“This is an area that provides an opportunity for contemplation and meditation,” McMahon said at the ceremony.