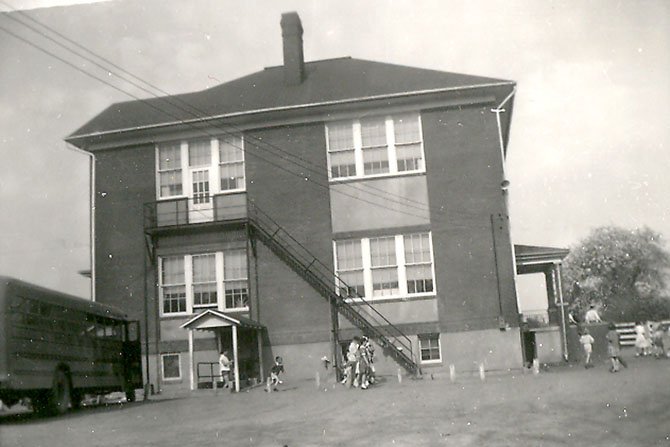 The Forestville School, which was located on Georgetown Pike where the Fire Department is now. The pike was named to the National Historic Register Aug. 22.

Great Falls — Georgetown Pike was named to the National Register of Historic Places Wednesday Aug. 22, giving the 14.4 miles of road from the Virginia-Washington, D.C. border to Leesburg Pike the recognition that many locals feel it deserves.

"The Georgetown Pike meets National Register Criterion A as locally significant in transportation for its role (1) as an essential link opening a major transportation route between the new Federal City and the west, (2) in the development of roads and road law in Virginia (1813-1934), (3) in the history of the Virginia Turnpike system (1816-1865), (4) in the extended tradition of public/private cooperative enterprise in internal improvements in Virginia and the District of Columbia, (5) in the cultural influence of the automobile in Northern Virginia (1919-1934) and (6) in providing the community a ‘main street’ while linking the isolated farms and crossroads villages in the Upper Potomac area of Northern Virginia with each other and the markets in the District of Columbia (1813-1934)," reads the registration form with the U.S. Department of the Interior.

The registration was completed by Great Falls resident Tanya Beauchamp, who, along with several residents, particularly Doug Cobb, Karen Washburn and John Adams, helped compile the research and other materials needed to get the pike included in the National Register.

THE ROAD was built from 1813-1827 by men using hand tools and horse drawn equipment. Construction included stone walls, culverts, arches and bridges when necessary. The bridge over Bull Neck Run, just west of Langley Ridge Road, was one of the original structures, and is still present today.

John Mason, Jr. president of the Falls Bridge Turnpike Company, wrote in 1820 that the road was "paved with large stone, closely fitted together, 12 inches deep in the center, falling of to six inches on the sides, and covered with broken stone six inches deep from side to side; making 18 inches stone in the center and 12 inches on the side. The whole is covered with sand, gravel or clay, as was found most convenient."

The 100 feet of roadway just east of Colonial Farm Road and south of the CIA Building is now an abandoned section of road, used by bikers and joggers.

"Planning for the construction of George Washington Memorial Parkway and the CIA headquarters building in the mid-twentieth century balanced historic preservation values against the need for a four-lane divided highway leading out of the city," the application reads. "Dolley Madison Boulevard provided this, maintaining the original Georgetown Pike direction from the Parkway to the CIA then bearing south to avoid the historic road and the Langley Fork Historic District."

THE ORIGINAL GEORGETOWN PIKE consists of an additional two miles, starting at Dolley Madison Boulevard east of the CIA. It continues into Arlington County and to the D.C. border.

The National Register also includes six contributing structures as part of the historical nature of the pike: the entire roadbed including grading, elevation and direction, with adjacent drainage facilities; the abandoned 100-foot section of road; an original stone retaining wall at Pimmit Run; an original stone, brick and earth road bridge over Bull Neck Run; a remaining stone wall from the bed of Pimmit Run to the Chain Bridge Road-George Washington Memorial Parkway boundary; and the sightline, elevation, boundary and directional continuity provided at the intersections of Georgetown Pike and the GW Parkway, Dolley Madison Boulevard and the Beltway.

Non-contributing structures, which are features contributed after the period of historical significance, are also included. This period is from 1813 to 1934, when the road was transferred to the Virginia Department of Highways.