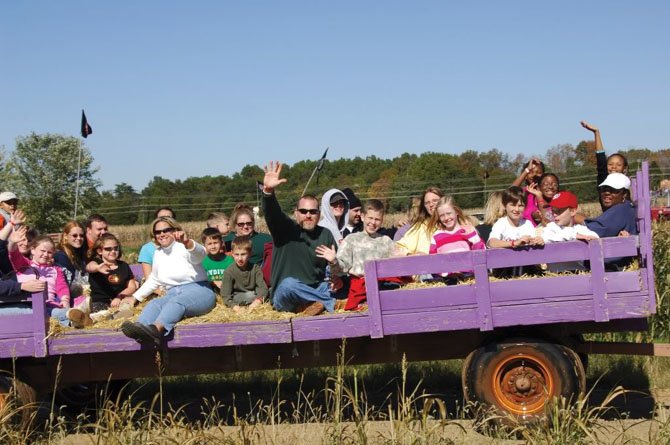 Visitors to Cox Farms enjoy a hayride. In the background are some of the giant slides.

Centreville — Cool, crisp weather, apple cider, pumpkins and changing leaves are sure signs of autumn. In the local area, it also means it’s time for the annual fall festival at Cox Farms.

With giant slides, hayrides, rope swings, farm animals and their babies, a goat village, food, live entertainment and a Cornundrum Cornfield Adventure, Cox Farms offers 90 acres of family fun. And at night, older teens and adults can get their share of thrills and chills via the fright-filled Fields of Fear.

Parents and children have fun together on the giant slides.

“This is our 40th anniversary and we’re really happy about it,” said Lucas Cox-Richard, partner and co-manager with his sibling, Aaron Cox-Richard. “Our parents are still involved, but we now have the reins. We like to call ourselves co-farmers-in-chief.”

It’s a big job, but one they do willingly and with enthusiasm. “Aaron and I grew up with the festival,” said Lucas. “And as much as we love Northern Virginia, it’s sometimes nice to get into the countryside and enjoy some outdoor, out-of-the-ordinary fun.”

He’s also excited about all the new attractions in store this year for attendees. “We decided to kick up our hayride a notch,” he said. “We changed the route for the first time in nine years.”

Always popular, the hayride lasts nearly 25 minutes and travels by several vignettes, including cartoon characters in the cornfield, comical space aliens, cowboys on horseback and a wild-west town. At the end, it travels through a large, revamped and enchanted wizarding barn filled with music, flashing lights and scenes of wizards, witches and magical plants and creatures.

Besides that, said Cox-Richard, “We’ve upgraded the witches’ house along the hayride and added a superhero skit. And a new spaceship has crash-landed in the field. It has a 1974 Volkswagen Beetle cab with all kinds of bells and whistles, and the aliens are waving and giving high fives. The old spaceship is now a target for pumpkin slingshot.”

The festival also has its first-ever mechanical bull; it’ll be in the games area near the dinosaur slide. Open only on weekends, it’s for children 4 feet and taller.

The free, weekend events also include the pumpkin slingshot — the festival’s most-popular game — plus entertainment on the music stage. Live bands perform, and Farmer Jack sings and tells stories while milking his cow, Bingo.

In addition, said Cox-Richard, “The mining sluice is super-cool. It’s a water tower that dumps water into a big, curvy trench where people can pan for fossils, gemstones and arrowheads.”

New, as well, is Bunnyville, inside the slide barn. “A slide comes out of the top of the barn, and the bottom part houses Bunnyville,” said Cox-Richard. “We built a model of Washington, D.C., with the monuments and White House, and the bunnies jump around in there. There are 12 bunnies and they’re super-cute and love their new home.”

Actually, Cox Farms has animals galore. Children may feed baby goats in their own goat village. Alpacas are on the mountain leading up to the dinosaur slide and a peacock roams free. There are also baby chicks, hens and chickens, rabbits, turkeys, pigs and piglets, calves, milking cows and a llama.

People waving to the camera while on the hayride at Cox Farms.

“The sheep moved to the farm-chores area, and they’re really snuggly this year,” said Cox-Richard. “We also have some newborn goats.”

Geared for 2-6-year-olds, the farm-chores area features old-fashioned water pumps and troughs, a corn conveyor belt, chicken coop and a little garden where children may pump water into buckets and water the crops.

The Kiddie Zone, for children 5 and under, also gives them a calmer place to play. The fun includes smaller themed slides, rope swings, hay bales, a wooden train and a pond where they can throw pebbles. Little ones may also play on the Three Little Pigs’ house and slide and climb on a wooden Jeep in the front yard.

Festival visitors will also enjoy the five giant slides, straw tunnels and the Cornundrum Cornfield Adventure. The latter features funhouse mirrors, a hall of doors, giant vortex and a pirate ship. And this year, said Cox-Richard, “We added the Great Pyramid with hieroglyphics and a couple surprises inside.”

Food is available for purchase throughout the farm. The selection includes hot dogs, hamburgers, nachos and Dominion root beer on tap. “We also added Dominion root-beer floats,” said Cox-Richard. “We bought a new smoker so we can offer home-smoked, pulled-pork, barbecue sandwiches. We’ve been happily testing it out all summer long. And this year, we’re also baking our own chocolate-chip and sugar cookies.”

Apples and fresh cider are free. If desired, visitors may bring their own lunches (no alcohol) for picnics on the grounds. They may also buy a wide variety of treats in the farm’s market. The goodies include freshly baked apple pies, local apples, kettle corn, fresh cider, dessert breads, jams, local honey, Indian corn, squash, gourds and fall decorations. Visitors even get to choose a free, patch pumpkin to take home.

Once night falls, however, scary creatures are everywhere, so the 20-acre Fields of Fear isn’t recommended for children under 12; and anyone under 14 must be accompanied by an adult, 18 or older.

Hardy souls brave enough to enter the Fields of Fear are led to the Cornightmare to experience cornfield terrors in the dark. There, they walk through the Hall of Whispers, Bug Room and Claustrophobia, secluded in tall corn with creatures that aren’t human. And this year, said Cox-Richard, “We added crazed clowns and a new, secret finale to the Cornightmare.”

There’s also the Dark-Side Hayride, with scary actors and scenes along the way, including Farmageddon, a junkyard, frightening aliens, jungle monsters and zombies. Cox-Richard says it’s definitely not for the faint of heart, adding, “The zombies will scare people.”

The Firegrounds is also part of the nighttime events, but it’s fun and not frightening. Cox Farms’s big, six-lane slide is open for rides by torchlight, and there are giant bonfires where people can hang out, listen to music and roast marshmallows. And performing will be a fire dancer and a magician.

Traditionally, the fall festival draws thousands of people each week from throughout the Washington Metropolitan area, and Cox-Richard is delighted to see them. “Fall is that time of year when the weather’s perfect and everyone’s hardwired to go outside,” he said. “And we’re happy giving them a break from the go-go-go, D.C. atmosphere and letting them have some good, old-fashioned, technology-free fun.”

“Aaron and I played here as kids, and now Aaron’s kids and my friends’ children are coming out and enjoying the same things – the slides, rope swings, hayrides and cider – we loved as children,” continued Cox-Richard. “We’re working harder than we ever have, but it’s incredibly rewarding seeing all the families smiling and happy. It makes it all worthwhile.”