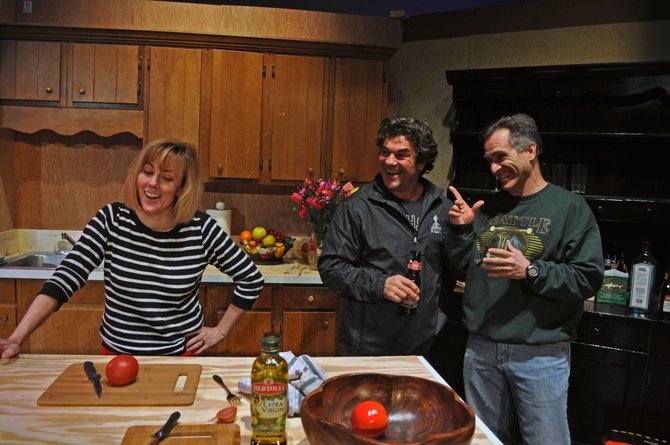 Melissa Dunlap as Karen, Michael Donahue as Tom and David Whitehead as Gabe in rehearsal for the Providence Players production of "Dinner With Friends." Photo by Chip Gertzo/Providence Players

Sitting around a table at a recent rehearsal, Providence Players of Fairfax Director Tina Thronson and some of her cast discussed the troupe's funny yet bittersweet Pulitzer Award winning next play, "Dinner with Friends" by Donald Margulies. 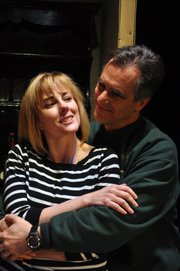 Melissa Dunlap and David Whitehead as Karen and Gabe in the Providence Players production of "Dinner With Friends."

"Our next show rings so true to life. It is a grown-up play about grown-up things; focusing on couples and their marriages but in some very unlikely, unexpected ways," said Thronson.

"Dinner with Friends" focuses on two couples over a period of time, looking at their early courtships and their on-going marriages, their love and their mistakes. All peppered with flashbacks of time and place, along with a generous helping of food and food references to keep the production full of energy and the audience leaning forward trying to anticipate what might happen next.

The production has four characters; two couples who have been dear friends for years. The story focuses on what happens after one couple lets it be known that a breakup of their marriage is imminent. But this is no straight-forward melodrama with clear sympathies toward one particular character; it is more complex than that, suggested Thronson. 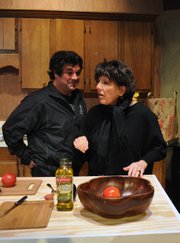 Michael Donahue (Tom) and Jayne Victor (Beth) rehearse a scene from the Providence Players production of "Dinner With Friends."

Why is food a focus? According to cast member David Whitehead, "food is used to help the characters take a break from confronting their relationships and themselves." Foodie references also spice-up the tart dialogue, noted Whitehead.

The two couples are Gabe (Whitehead) and Karen (Dunlop), a seemingly happily married middle-aged pair. They are the long-time friends of Tom (Michael Donahue) and Beth (Jayne L. Victor). But, the unexpected news of the looming divorce of Beth and Tom sets the production on its way.

The use of scene flashbacks will provide the audience with the opportunity to see both couples over time. According to Dunlop, "the audience will see how things and viewpoints change. Who is likeable, who to be trusted all change as the play progresses. It is like a mystery. Don't be so sure of your first impressions of anyone or even the ending you initially expect."

Whitehead indicated that the show's humor includes some "biting sarcasm that will ring true." Even lines about wine "take on unexpected meanings. Who would expect that 'astringent,' used in describing a wine's taste, would lead to a much deeper conversation about marriage."

The Providence Players expects that "Dinner with Friends" will spark many conversations as the audience heads home. You are invited to join the discussion.