‘I Put It in God’s Hands’
Votes 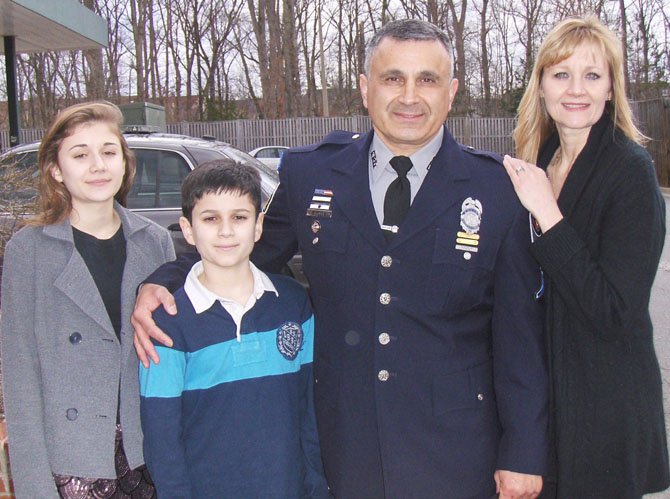 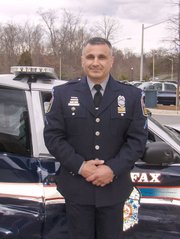 Looking at her husband’s badly damaged police cruiser, with the rear end demolished and the passenger side caved in, affected Beverly Akhavan profoundly.

She knew he was safe and the vehicle was just on display during the ceremony honoring him and some good Samaritans last Friday, but she couldn’t help the way she felt.

“I’m shaking like a leaf, seeing the car,” said Akhavan. “It’s like going back to the night the phone rang — at 11:22 p.m.” That’s when Lt. Mike Reeser called her, March 11, and said Rockie, her husband of 17 years, had been involved in a car accident and was at Inova Fairfax Hospital.

“It was hard for me to hear anything else because my heart was pounding in my ears,” she said. “But he said Rockie was OK and was cracking jokes and that they’d bring him home to me.”

Then her husband called and, said Akhavan, “I was so happy to hear his voice. And several hours later, he came home. I waited for him on the sofa and heard his car pull up. He came in and told me all about what happened and then went to sleep.”

The couple has two children, Juliana, 14, and Andrew, 11, and as they woke up in the morning, their mom told them about the accident, but reassured them that their dad was home and all right. But for Akhavan, worrying about her husband’s safety is part of her life.

“It’s always there,” she said. “This is the phone call every officer’s spouse worries about. But I know Rockie’s a wonderful officer and very smart, and he puts the safety of himself and the other officers first and is good at what he does.”

So how does she deal with the fear? “I put it in God’s hands to look after him,” said Akhavan. “And I thank God for bringing him home to us. It’s a miracle; I feel humbled and so incredibly blessed.”