Great Falls — As the weather warms and lawns begin to grow again, it’s tempting to start fertilizing right away to ensure they look as full and green as possible. The Great Falls Citizens Association’s Environmental Committee says that spring fertilizing isn’t necessary most of the time, and can cause harm to lawns and waterways.

According to the Great Falls Citizens Association’s Environmental Committee, the best products to use on lawns are natural, organic fertilizers, and the next best choice are slow release of controlled release fertilizers. The best options are composted leaves or manure, compost tea, bone meal, greensand, palletized alfalfa, cottonseed meal and worm casings. 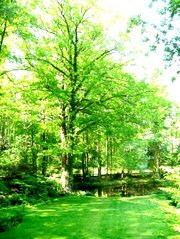 A Great Falls lawn that does not use herbicides or pesticides.

They also recommend watering in the morning so the day’s heat won’t evaporate the water before it is absorbed. Mowing high (2 to 2.5 inches) and leaving grass clippings on the lawn helps recycle nutrients, retain water and creates better topsoil.

MOST GREAT FALLS LAWNS are cool season grasses such as Kentucky blue grass, tall fescue, perennial rye grass and fine fescues. These grasses should be fertilized from mid-August through November, fertilizer used in the spring isn’t absorbed very well.

Fertilizers are often made up of nitrogen (which builds protein and growth regulators), phosphorus (which supports metabolism, respiration and photosynthesis) and potassium (which forms starch, regulates water, resists disease and forms chlorophyll).

Starting Dec. 31 of this year, the state of Virginia will not allow the sale or distribution of lawn maintenance fertilizers that contain phosphorus or any compound containing phosphorus.

Starting July 1, 2014, lawn maintenance fertilizers must not have more nitrogen than the rates recommended by the Virginia Nutrient Management Standards and Criteria.

Scotts Miracle-Gro, one of the leading fertilizer makers in the country, volunteered to remove phosphorus from its products in 2012. According to the Chesapeake Bay Foundation, both nitrogen and phosphorus are reaching the bay at a rate six times higher than in the 1600s, when the bay was at its healthiest.

An abundance of these two elements feed algae blooms, which block sunlight to underwater grasses, and sucks up oxygen when they decompose, resulting in dead zones that kill or weaken fish and shellfish.

“Great Falls is located on top of fractures limestone bedrock, or ‘karst.’ The natural cracks and fissures act like plumbing, materials that get dumped into surface water can make their way through those underground cracks to unexpected places, including other people’s wells,” said Amy Stephan, a member of the committee. “So we take special care when adding anything to our surface water, to protect all of us.”

SAM PARKER OF GREAT FALLS says he attended a presentation given by the GFCA in 2011 that caused him to change his lawn maintenance habits permanently.

“Before I went to that meeting, I was the person who they were campaigning against. I had my lawn fertilized in the first few weeks of spring, and I had my lawn watered in the middle of the day throughout the blazing hot summer,” he said. “Now I think I’m much smarter about the way my lawn is taken care of, and I’ve actually saved a lot of money doing it.”

Dan Swartz, a soil scientist with the Northern Virginia Soil and Water Conservation District, spoke at that presentation about how fertilizers are often used in place of a healthy soil food web, which should take care of itself if “healthy.”

The Great Falls Library has free soil test kits, which contain instructions for taking samples and sending them to be analyzed, at a cost of $10.