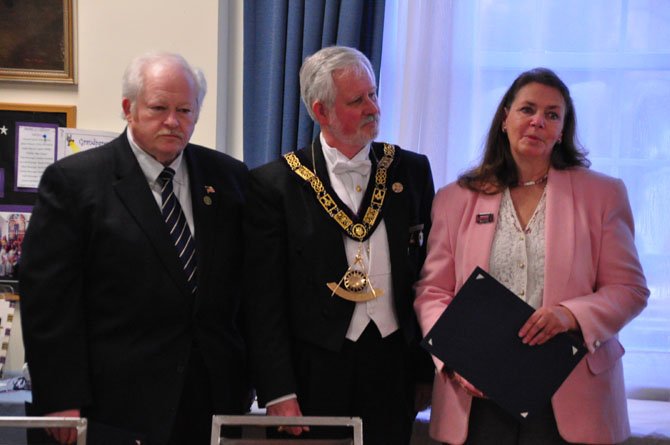 Herndon — The Herndon Masonic Lodge presented their annual Community Builders award Monday, April 1, to Vice Mayor Connie Hutchinson and former councilmember Bill Tirrell. The two were recognized for their contributions to many aspects of the community.

“As Masons, we focus on families and the community, and we want to honor individuals who improve the community by making things better all around us,” said Mauricio Carasco, worshipful master of the Herndon lodge. “These two outstanding citizens are responsible for countless contributions to the Town of Herndon.”

Hutchinson’s father came to Herndon in 1908 when he was 3, and she has lived there most of her life. She is in the midst of her seventh term on the council, and her second as vice mayor. She has also served on the town’s Architectural Review Board and Heritage Preservation Review Board, as well as with the Herndon Historical Society and Herndon Youth Soccer.

“My goal was never to receive recognition, it’s been a pleasure to serve this community,” she said. “I’m very honored, but I feel like it’s an opportunity of everyone who’s gone before me in making this community what it is today.”

Tirrell has served eight terms on the council, being first elected in 1990 and most recently from 2010 to 2012. He has also served on the town’s Planning Commission, Board of Zoning Appeals and Architectural Review Board.

“Unlike Connie, I’m a newcomer to the town, I’ve only lived here 38 years,” he said. “The Navy sent me here many years ago, and I stayed … I’m thankful for the Masons for taking the time to say a couple of nice things about us.”

Present at the ceremony was the Grand Lodge of Virginia’s Grand Master Louis Campbell. He praised both Tirrell and Hutchinson for their outreach efforts and thanked the Herndon lodge for taking the time to give the Community Builders award.

“I’m so pleased to be here, I’m always encouraging the lodges of Virginia to give the award, but not many of them do,” he said. “Sometimes we’re good at patting ourselves on the back, but not so good at recognizing the non-Masons in making the community a better place, which these two clearly do.”

The lodge presents the award every year to individuals who serve the Herndon community. Past winners include former Mayor Steve DeBenedittis and John Mosesso, who coordinated volunteers for the Herndon Festival and Herndon Homecoming Parade.