Karin’s Florist partners with local businesses to provide prom prize valued at over $1,000. 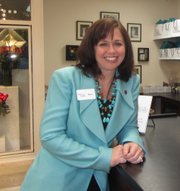 For 56 years, Karin’s Florist has been part of the Vienna community, serving it at births, anniversaries, proms, weddings, and other special events marking a passage in life.

Karin’s partners with charitable organizations, from medical causes to civic clubs, schools and the business community to raise support for them. The “Prom Package Contest” reaches out to Northern Virginia high school students with loads of gifts valued at over $1,000.

“We love supporting the community,” said Karin’s Florist president, Maris Angolia. “Today’s high school students are our customers of tomorrow. We appreciate the business the community brings us.”

THE PROM PACKAGE CONTEST, now in its sixth year, features a grand prize of limousine service from Reston Limousine, up to six passengers for six hours; dinner for six at The Capital Grille Tysons, a $350 value; boutonnieres and corsages from Karin’s Florist for three couples; hair styling for three young ladies and haircuts for three prom-going gentlemen from The Falls Salon in Great Falls.

The grand prizewinner will be randomly drawn. The student with most nominations—or “votes”—will win an outing for eight, compliments of Fun Company Events at Dulles Golf Center.

About six years ago, Angolia and her goddaughter were brainstorming marketing ideas that engaged the community, doing something to recognize high school students, which her goddaughter was at that time. The teen thought up the idea of a prom contest and Angolia expanded the project to include all Northern Virginia high schools. Other local businesses were quick to partner with Karin’s Florist.

Nowadays, corsages start at about $30 and go up depending on “extras,” said Angolia. Bling is big now.

NEW THIS YEAR to Karin’s service is a “Build-Your-Own Corsage” buffet. Young women going to proms can choose from a display menu: wristlet, flowers, and extras to accent corsage.

When the contest was initially developed, participants could only enter by going into Karin’s to do so. A few years later, the contest turned to the Internet, as well, and now, students can enter electronically.

Only one entry per person but same recipient name can be designated by multiple people. Angolia suggested getting family and friends to enter on a student’s behalf. The more times you are entered or “voted” for, the better your chances are to win,” said Angolia. Winner must claim prize within one week of drawing or another raffle ticket will be drawn.

Recipient of grand prize must be a high school student in the Washington, D.C., metro area, and the prize must be used towards a prom event. The winner cannot be an employee or family member of Karin’s Florist or other sponsors.

Winner will be announced on Monday, April 22. If the grand prizewinner’s prom has passed, the prize package over $1000 will be awarded.

All prizes were donated by businesses supplying them to the contest. “When we approached them, they all signed on,” said Angolia. “They really are great partners. We all want to do something for local students.”

Enter online at www.karinsflorist.com or stop by Karin’s Florist at 527 Maple Ave. E., Vienna by April 19. No purchase is necessary and you do not need to be present to win. The winner will be notified by phone and email if not present. The form, hard copy or electronic, must be filled out in its entirety and any entrant may only win one prize. Karin’s Florist is located at 527 Maple Ave. E., Vienna.