‘Castle’ To Give Way to Playscape Highlighting Nature
Votes

‘Castle’ To Give Way to Playscape Highlighting Nature

“It is private property, which the church very generously shares with the community when there aren’t programs [like preschool] going on. It was always just a space for children to play very vigorously, a place for families to gather.”

From the early days … 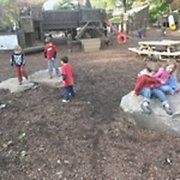 Youngsters play on the boulders.

Youngsters play on the boulders.

The Beverley Hills Church Preschool playground’s Castle was built in 1984.

After being on hold for more than four years, the renovation and revitalization of Alexandria’s Beverley Hills Church Preschool playground is officially underway. On Wednesday, April 17, the playground fundraising committee is participating in Act for Alexandria’s Spring2ACTion, a day devoted to online advertising and fundraising for non-profit organizations in the city of Alexandria, according to the preschool’s former director Sissy Walker.

Walker said the goal of the preschool is to align the playground design with the academic outlook of the school.

“We want children to encounter nature first hand,” said Walker, who is now the alumni outreach coordinator. “This is a cooperative preschool, with parents working on committees. It is very all hands on deck. The school has a very progressive educational philosophy, with an emphasis on creativity and problem solving.”

Originally slated as a project to begin in 2008, the preschool’s parents, staff and board of directors halted fundraising as the “economy tanked,” according to Walker.

According to members of the preschool community, the church playground has played a significant role in the community for decades.

“Since the church was built in 1938, the outdoor space was always somewhere that people could go and play with their kids,” Walker said. “It is private property, which the church very generously shares with the community when there aren’t programs [like preschool] going on. It was always just a space for children to play very vigorously, a place for families to gather.”

EVEN BEFORE the first wooden playground structures were built in 1984, Walker said the property was unique and special in the community.

“The property owned by church is a wooded hillside, which you don’t find in Alexandria,” Walker said. “There are lots of mature shade trees and lots of green space, so it is a bit of an oasis.”

It was in the 1980s that planning for the actual playground began. Walker said parents of the Beverley Hills Church preschoolers wanted to take advantage of the picturesque setting and build a playground according to was then considered a natural design.

“Back when I was a parent at the preschool, which would have been in the 1980s, the parents of the preschool wanted to really create a natural playground space with lots of wooden structures,” Walker said. “That is what was created back in 1984 with a company called Robert Leathers Company.”

She added that it was a true community built and kept playground with parent and community volunteers. Members of the community lovingly referred to this wooden playground as “the Castle.”

She said that between the board of directors and committees of involved parents and alumni, “the Castle was a huge collaborative effort.”

Unfortunately, though, as Walker said, the wooden structures were not going to last forever. The board and preschool parents acknowledged that the oasis needed a rebuild by the later 2000s.

“AROUND 2006, we started to be more thoughtful about what was it going to be — what we were going to replace the wooden structures with,” Walker said. “It was just eventually going to fall down. “

At the same time, she said a back-to-nature movement of sorts was happening in the education field.

“There was a lot of conversation in educational fields about children’s’ disconnect from nature,” Walker said. “We really began to want to have a more dynamic and naturalized space.”

The planning went hand in hand with the notion that “outdoor time is just as important as indoor time,” according to Walker. In 2008, they were even able to select The National Playground Company as the official designer.

Walker said the financial crisis of 2008 stopped all the fundraising in its tracks.

“We had committed to fundraising with alumni, but then everything went south,” Walker said. “It was not the right time. Everyone felt this way, so the project was just tabled.”

In the years since this decision to delay building, Walker said none of the initial playground pieces had been demolished.