Trying To Save Part of School
Votes

Trying To Save Part of School

Residents ask school system to save part of building. 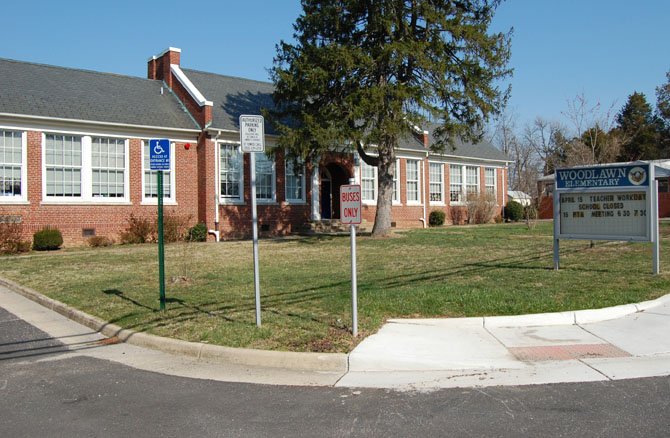 The building that faces Highland Lane is the original 1938 part of the facility. Multiple officials have recommended saving a portion of the structure for history’s sake. Photograph by Michael K. Bohn

This drawing illustrates the layout of Woodlawn School after renovation. The area outlined by the heavy black lines is the current footprint of the oldest buildings in the complex. The plan calls for their demolition, however the schools staff is revisiting that matter.

Mount Vernon — The planned renovation of Woodlawn Elementary School has become a topic of discussion between Fairfax County Public Schools staff members and local elected officials. At the heart of the discussion is the school system’s proposed renovations to the school. Those plans call for demolition of the original school structure, which opened in 1938 in the Engleside neighborhood near Route 1. That facet of the plan may change soon.

The demolition plans caught the attention of Lee District Supervisor Jeff McKay and state Del. Scott Surovell. McKay, who attended the school as a child, has since proposed a compromise that would preserve two of the original classrooms and the old front entrance as a separate structure. “This would preserve a part of our community’s history, but still allow the planned renovation to continue on schedule,” McKay said on Monday.

Cluster 4 Superintendent Deborah Tyler has agreed conceptually with the need for a compromise. “We decided to ask the architects to look again at the plans,” said Tyler, “and see if they can keep as many of the historic features as possible.”

The current facility is an amalgam of structures built during the past 75 years. Classrooms date from 1938, 1947, 1952, 1956, 1968 and 1987. They are stitched together with hallways, all crowded with students and staff. A visitor can see the changes in materials and design by walking from one end to the other, much like an archeologist looking back through the layers of an old city.

IN MARCH, school administrators and facilities managers were pursuing approved plans to renovate the school, which had scored poorly in a 2008 facility assessment survey. Those plans called for the razing of the 1938 and 1947 structures and building structures. As of that time, according to FCPS spokesman John Torre, the plans had been submitted for permit approval, but funding had yet to be secured.

“I was disturbed when I first heard about the schools staff’s plans, McKay said on March 18. “I was disappointed that FCPS officials were initially against a compromise regarding historical preservation.”

FCPS pressed forward, and on April 2, Torre offered the following in an email: “The design has been vetted with the school board member, county supervisor, various members of the design committee and at a community meeting. The planning and design process has been ongoing for the past two years.”

An important matter, which may have complicated the coordination issues that McKay mentioned, is that the Woodlawn facility is in the Mount Vernon district, but many of the students live in Lee district.

Tyler said that her decision to ask for alternative plans arose from a meeting that she had on April 8. She discussed the original designs with FCPS facilities manager Jeff Plantenberg, school board members Dan Storck (Mount Vernon) and Tammy Derenak Kaufax (Lee). Platenberg left that session with a request to revisit the demolition plans.

McKay said that he was unaware of Tyler’s initiative when he scheduled a separate meeting on April 16. Storck and Kaufax could not attend, but McKay, Surovell, Platenberg and Fairfax County History Commission chair Gretchen Bulova discussed possible options. “I’m pleased that we could reach a happy solution among us,” McKay said of the group’s recommended compromise.

Surovell said this week that he was pleased that FCPS will reconsider the plans now that they have heard from the community. “The Route 1 corridor has a unique concentration of historic sites,” he said, “and I think it’s important to try to save them.”

Storck wrote of his next steps in an April 16 email: “I will be holding a follow-up meeting with school and interested community members after I have received the options, costs and timing impacts that I have requested from staff. This should be in the next couple of weeks.”

School Board member Kaufax also said that she is waiting for the schools staff for recommendations. “We asked them to be as creative as possible in searching for a way to both preserve a part of the old building and provide a healthy learning environment for the students.”

Woodlawn principal Dawn Hendrick voiced her position on the reconstruction through Torre: “The renovations will provide Woodlawn students with a safe, clean learning environment. The building and classrooms will be technologically ready for learning. The renovations will also make the facility ADA friendly and staff will have accommodations that make work easier.”

THE IDEA of a compromise appeals to the students’ parents. Woodlawn PTA president Shavonta Green-Floyd addressed the issue Monday: “The PTA is pleased with the recent developments. We have yet to issue a formal position, but we support the concept of balancing some historical preservation with the much-needed renovations. The needs of the students and teachers come first, and we hope any compromise will not delay the renovation schedule.”

The surrounding community also favors some means of historic preservation. “We had no input during the planning process,” said Karen Pohorylo, president of the Engleside Civic Association. “But we certainly support a compromise on this and we’ll find a use for the older building if the county will save it.”

Woodlawn School enjoys a rich history. The Quakers who bought Woodlawn Plantation in 1846 started a school the following year in the miller’s cottage at George Washington’s gristmill. Later, after the Friends built their meeting house in 1851, the students met there. Courtland Lukens, owner of Engleside Farm, and E. E. Mason, son of John Mason who purchased Woodlawn from the Quakers in 1853, donated land for a two-room school in 1869.

The school burned in 1917, but the county quickly rebuilt it on the same site. The current school opened in 1938 on land purchased from Engleside Farm. Over the years, Woodlawn teachers and principals have come from many of the Quaker families who were important to the vibrancy of the community — Gillingham, Lukens, Wilkinson, Cox, Buckman and others.