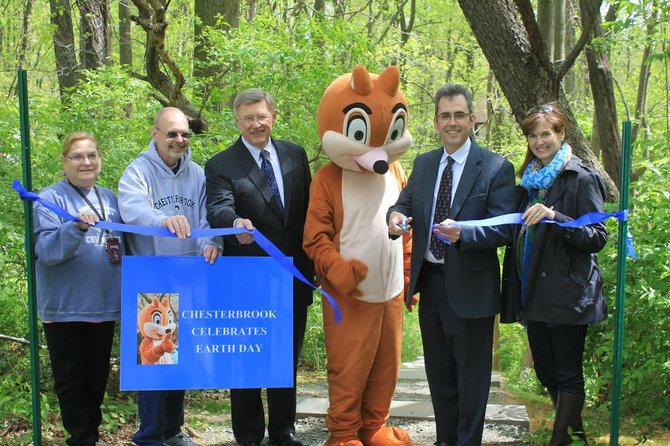 Representatives from the McLean Community Foundation and Transurban Fluor joined Chesterbrook staff and families for a ribbon cutting ceremony at their Earth Day Celebration on Monday, April 22, to inaugurate their newly renovated outdoor stairway. The Chesterbrook PTA, in conjunction with a Transurban-Fluor 495 Express Lanes Community Grant and a McLean Community Foundation Grant, had worked with Fairfax County Public Schools to renovate the stairway, which was constructed in 1984 through an Eagle Scout Project. The 75-foot stairway runs down a steep hillside at the back of Chesterbrook and connects to parkland and the Franklin Park neighborhood. The stairway was originally constructed of timber frames filled with earth and gravel. Heavy storm water runoff combined with little or no maintenance had resulted in hazardous conditions. The newly renovated stairway provides students and neighbors with safe access to the school’s playground, track and playing fields and helps ensure that students can walk to and from school.