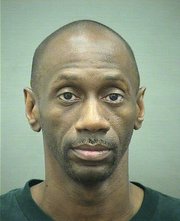 Craig Patterson sat stonefaced in a green jumpsuit as his voice boomed from speakers in the courtroom. Commonwealth's Attorney Randy Sengel pressed a few buttons on his laptop computer, and the 911 call began playing a key piece of evidence in the case against the 44-year-old Arlington County sheriff's deputy who shot and killed Julian Dawkins, a 22-year-old Alexandria man.

"I had a young man pull a knife on me, and I shot him," Patterson told the dispatcher in a crisp and formal tone. "He's lying on the ground, face down."

At that point, the dispatcher asked Patterson if the man was conscious.

"Sir, are you conscious?" Patterson asked.

When that part of the recording was broadcast in the packed courtroom, family and friends of Dawkins reacted with shock and surprise. After the hearing, they said they couldn't believe how matter-of-the-fact he was about killing a 22-year-old man with a promising future and hordes of friends.

"He had no remorse," said Gwen Pratt-Miller, mother of Dawkins, in a brief press conference after the hearing. "The 911 call showed that even more to me."

THE DISPUTE between Patterson and Dawkins erupted shortly after midnight on May 22, the night of a party celebrating Dawkins' cousin, Tierra Ruffin-Pratt, who had just been signed to the Washington Mystics. Testimony from several witnesses descried a verbal confrontation between the two men, who were apparently engaged in a heated conversation.

"I live around here," Dawkins said to Patterson, according to testimony.

"Well I've been around here longer than you," Patterson responded.

Dawkins tried to end the conversation, according to an eyewitness who watched the confrontation from her bedroom window. But Patterson was insistent. He left the scene vowing to come back. Then, according to several eyewitnesses, he returned with a pistol, handcuffs and a badge from the Arlington County Sheriff's Office.

"I heard a pop," said Sharonda Brown, who lives near the scene of the shooting. "Then I realized it was Julian lying on the ground."

IN THE MOST emotional testimony of the hearing, Brown explained how she threw on some clothing and raced downstairs in time to see the aftermath of the shooting. As she approached the man, who was face down on the ground, she realized it was Julian Dawkins — a close friend and neighbor. She got there just in time to hear him take his last breath, and then expel a long and steady exhale. Patterson was walking away from the scene.

"He pulled the latch on the gate," she testified. "Then he walked out of the yard as if nothing had happened."

Brown broke down in tears as she spoke about the last moments of the life of Julian Dawkins. The courtroom, which was standing-room-only, included many spectators who were overcome with emotion by this point in the hearing. Later in the hearing, a bench in the spectator section broke and sent several people tumbling to the ground. The hearing resumed, and a team of three defense attorneys tried to paint a picture of of an intoxicated Dawkins chasing Patterson with a knife after a game of dice.

"Does anybody ever have dice games here," asked defense attorney Christopher Leibig.

"No," responded Reginald White, who lives near the shooting.

PATTERSON DOES NOT dispute the fact he shot Dawkins, a fact clearly established by the 911 call introduced into evidence this week. The real debate that will be presented at trial is whether or not Patterson was acting in self defense. According to an Alexandria Police Department officer who photographed the corpse, Dawkins had a knife but it was not in a position indicating it had been open during the final confrontation.

"It was clipped to the outer portion of his jeans pocket," said Officer Judy Taylor. "It appeared to be closed."

Defense attorneys called one witness to the stand during the hearing. He testified that he saw Dawkins chasing Patterson, an indication that the defense team will be trying to present evidence that Dawkins was the aggressor in the confrontation. The defense also presented evidence that Patterson's shirt had some kind of stain on it, potential evidence that he was roughed up during a physical confrontation.

"It does appear that Mr. Dawkins was chasing Mr. Patterson," defense attorney Joe King told the judge. "He had a knife, and Patterson knew that at the time."

THE CASE SHOCKED the Lynhaven neighborhood when the shooting happened, especially after the Alexandria Police Department waited a full week before bringing charges against the off-duty law-enforcement officer and arresting him in Spotsylvania County. Police and prosecutors say Patterson's job had no bearing on the investigation, although friends at the funeral were skeptical.

"I cannot deny that when you have someone of authority who is involved in an event like this, it does change the circumstance in terms of how it's viewed," said Police Chief Earl Cook during a press conference earlier this year. "But it does not change the process in terms of how we investigate."

Many of the friends who attended the funeral first met Dawkins at Cora Kelly Recreation Center, where he was frequently selected as the captain of the basketball of teams. His love for the game earned him a spot on the junior varsity team at T.C. Williams High School, where he graduated in 2009. His outgoing personality and sense of leadership made him a popular student, one who had a wide circle of friends.

"Life is too short. Let's not hold grudges," the mayor told mourning friends and relatives during the funeral. "Live each day to its fullest, and forgive those who have created harm."