Shedding Sunshine on the Secret World of Regulation in Virginia
Votes

Shedding Sunshine on the Secret World of Regulation in Virginia 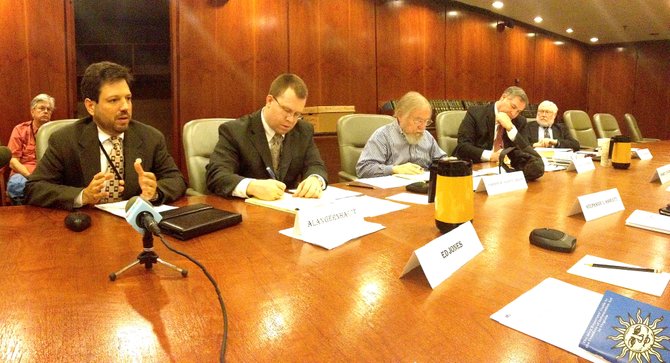 Del. Scott Surovell (D-44), left, presents his bill to members of the Rights and Responsibilities Subcommittee of the Freedom of Information Advisory Council. Photo by Michael Lee Pope.

What is the State Corporation Commission?

Created to replace the old Board of Public Works in the early 20th century, the State Corporation Commission has authority that extends from utilities and insurance to state-chartered financial institutions, securities, retail franchising and railroads. It's also the state's central filing office for corporations, limited partnerships, limited liability companies and uniform commercial code liens. In 2011, the Virginia Supreme Court ruled that the State Corporation Commission is not subject to the Virginia Freedom of Information Act.

Richmond — Ever wonder what happens during deliberations that regulate payday lending? How about the effort to oversee your health insurance? From your electric bill and your water bill to your sewer bill and your car insurance, the State Corporation Commission is probably one of the most consequential state agencies. And yet it operates in the dark, totally outside of the reach of the Virginia Freedom of Information Act.

"One of my favorite quotes is from Justice Louis Brandeis from back in the 1920s," Del. Scott Surovell (D-44) told members of a Freedom of Information Advisory Council subcommittee this week. "He wrote that a streetlight is the best policeman and sunshine is the best disinfectant."

In an effort to shine some sunshine into one of the darkest corners of Virginia government, Surovell wants to open the record of the State Corporation Commission. During the last General Assembly session, he introduced a bill to do just that. But legislators decided to table the effort and refer it to the advisory council, which sent it to the Rights and Responsibilities Subcommittee. It's members convened this week in Richmond to hear Surovell make the case to make the commission subject to the Virginia Freedom of Information Act — with some exceptions.

"Personally, I would like to make the entire SCC subject to FOIA," Surovell told members of the subcommittee. "However, I don't have an interest right now in taking on a couple thousand businesses and about 50 lobbyists."

BUSINESSES AND LOBBYISTS showed up to oppose the effort anyway, and members of the subcommittee decided against endorsing the legislative effort. Opposition was led by the gas utilities and the telecommunications industry, whose representatives said they didn't see any reason for opening up the process to public scrutiny. Some parts of the commission's business resembled a judicial body, they said, while other parts required secrecy to ensure that the captains of industry could take quick and decisive action without having to worry about the public looking over their shoulders.

"If the notes and the dialogue from those meetings were to be subject to FOIA, we feel like it would have a negative effect on the way that we operate our system and ultimately have a negative effect on the customers we serve," said Brent Archer, director of business policy for Columbia Gas of Virginia. "There would be hesitancy and a reticence among the utilities to share that information to have that kind of dialogue."

Leaders of the telecommunications industry agreed, adding that the State Corporation Commission is not subject to the Virginia Freedom of Information Act for a good reason — so industry leaders and their regulators can have open and frank conversations without fear that sensitive information will be revealed to the people or the press.

"We enjoy that give and take with the commission, and we would hate to see that dialogue become a matter of public record," said Duront Walton, who represents the Virginia Telecommunications Industry Association. "If it does, it will certainly change the combatants and people who represent us will be in a courtroom and not in an informal meeting."

OPEN GOVERNMENT advocates say the State Corporation Commission is simply too big and too important to operate outside of the public sphere. Although the rulings of the commission are public, the deliberations that lead to the conclusions are not. That's why Surovell and other supporters of government transparency are pressing to make the commission subject to public-records laws.

"It is not without precedent around the country," said Megan Rhyne, executive director of the Virginia Coalition for Open Government. "Several other state equivalents of this type of office, even ones that are constitutionally created, are nonetheless subject to, if not the entire public records and public meetings law, at least portions of it."

Since last session, Surovell has included new exemptions to his bill in an effort to build consensus. For example, he added new language to the bill specifying that the commission will have no obligation to disclose public records detailing its regulatory activities. Another new provision exempts the commission from public meeting requirements.

"We believe that all agencies of government should be subject to FOIA with reasonable exceptions," said Sue Lewis, vice president of the League of Women Voters of Virginia. "Certain sensitive areas can still be protected, but basic administrative records should be available to the public upon request."

DURING THE SUBCOMMITTEE meeting, members heard from one woman who opposed an effort from Dominion Virginia Power to install power lines over the James River. She was part of a group that engaged in an extended effort to build a case against the company, but she said that the group's efforts were thwarted by the broad exemption the regulatory agency enjoys. As a result, she said, much of the deliberations leading to regulation of Dominion happens in the dark.

"In our attempt as private citizens to fight this blight across the James, we learned how this game is played," said Margaret Nelson Fowler of Williamsburg. "This game is hardball and the weapon is cash."

Back in 2011, the Virginia Supreme Court ruled that that State Corporation Commission is not subject to the Freedom of Information Act. Some believe it was a correct ruling, a valid interpretation of the General Assembly's wishes. Others, including Surovell, feel the lack of transparency is a stretch. That's why the current legislative battle is at the center of an ongoing debate about the nexus of money and power in the commonwealth. But members of the subcommittee did not feel that Surovell's effort was worth supporting, in part, because the issue is so complicated.

"It would be very hard to apply this public meetings provision to the commission because they operate in part as a judicial body," said Scott White, deputy general counsel to the State Corporation Commission. "Nobody has come to us and said that there is an actual practical problem with the way the General Assembly has created this separate statutory framework."

LEADERS AT THE State Corporation Commission say they see no need for any legislation. But if legislators are going to take action, they would oppose efforts to make the commission subject to the Freedom of Information Act. Instead, they say, they would like to new language added to the part of the code dealing with the commission. During the subcommittee meeting this week, Surovell rejected that idea.

"We have an existing construct that's worked well with the rest of government, as far as I know, and it's been amended and tweaked and messed with for the last 20 or 30 years now to deal with all the contingencies that pop up," said Surovell. "And it's not clear to me why the State Corporation Commission's procurement or human relations matters are any different than anybody else's."