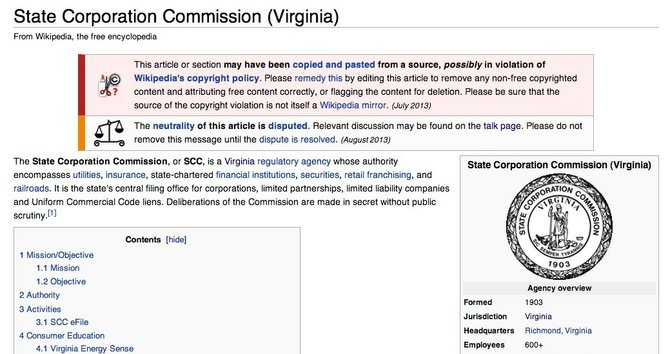 The Wikipedia page for the State Corporation Commission includes a note explaining the neutrality of the article is disputed. That's because an official from the commission formally objected to changes to the page describing the agency's deliberations as secret.

The battle lines in the war over transparency at the Virginia State Corporation Commission have shifted from the committee room to the Internet. Last week, director of information resources Kenneth Schrad noticed recent changes to the Wikipedia page about the State Corporation Commission. One explained that "deliberations of the commission are made in secret without public scrutiny." The other change explained that "in 2011, the Virginia Supreme Court ruled that the commission is exempt from Virginia Freedom of Information Act requests" and that "and effort is being mounted to overturn this decision through legislation."

"The text additions posted in relation to the above reference are not factual," Schrad wrote using the login PR Geeks.

Schrad then asked that all references to secret deliberations and pending legislation be removed. In its place, Schrad suggested language explaining the "overall policy" about public access is to promote "increased awareness." He also suggests language about "public examination" of State Corporation Commission records are "available to the same extent as the records and files of the courts of the commonwealth." Then he added, "This post is on behalf of the State Corporation Commission;" Schrad wrote as PR Geeks.

DELIBERATIONS OF THE State Corporation Commission take place behind closed doors. When commissioners meet to consider rate changes, the public is not allowed to witness. And when commissioners meet to consider guidelines for utility companies or payday lenders, the meetings are closed. But because members of the public are allowed to submit comments, Schrad says, it's factually incorrect to suggest that deliberations happen in secret.

The debate about just how secret the commission should be is a matter of controversy, one that has currently been the subject of several news articles. Del. Scott Surovell (D-44) is hoping to make the State Corporation Commission subject to the Virginia Freedom of Information Act, which it is currently exempt from as the result of a 2011 ruling by the Virginia Supreme Court. News coverage of Surovell's effort prompted the changes to Wikipedia, which caused Schrad to object.

"We followed the established procedure," he said. "It's up to somebody else to determine what appears on Wikipedia."

SHEDDING SUNLIGHT on the secret world of regulation in Virginia is at the heart of Surovell's legislative effort, one that is opposed by gas utilities and the telecommunications industry. During a meeting of a Freedom of Information Advisory Council subcommittee last month, Surovell presented draft legislation to create more transparency by making the commission subject to the Freedom of Information Act. The deliberations between commissioners would remain outside of the public realm. But comments — both formal and informal — would be subject to public-records laws.

"Right now, I can't get the emails that payday lenders send to the SCC when the guidelines are under deliberation," said Surovell. "That's wrong."

Leaders at the commission argue that the many of the documents are available to the public even though the agency is not subject to the public-records law. All people need to do, they say, is simply make a request. But Surovell says that's not good enough. What if future leaders of the commission don't want to hand over embarrassing documents? Nothing in the law would force them to do so. And perhaps even more pressing, what if the documents requested are the kind of informal communications, such as email, that leaders of the telecommunications industry say they want to keep hidden from public view?

"The idea that we shouldn't make the SCC subject to FOIA because they are willing to share documents flies in the face of reason," said Surovell. "By that logic, we wouldn't need a Freedom of Information Act at all. But that's not how the world works."

FOR NOW, THOUGH, deliberations of the State Corporation Commission will continue to take place behind closed doors. And even though the commission's director of information resources made a formal request to Wikipedia on behalf of the commission to change the text, that edit is still pending. According to Wikipedia, organizations are discouraged from writing articles about themselves. But the website does allow edits from organizations under certain conditions.

"Typically Wikipedians will strongly discourage editing of articles when there is a clear conflict of interest with the editor," said Jay Walsh, senior director of communications for WikimediaFoundation.org in an email. "That could include an employee of a company, someone paid to represent a company or person, or in some cases the actual person when editing their own article."

Walsh explained that it might be relatively acceptable for an organization to be involved in editing its own Wikipedia page. For example, he explained, an employee of a company may want to update a statistic in an article or make a minor correction to a spelling mistake. As long as the minor edits are accurate, include a reference, he said, it wouldn’t raise red flags.