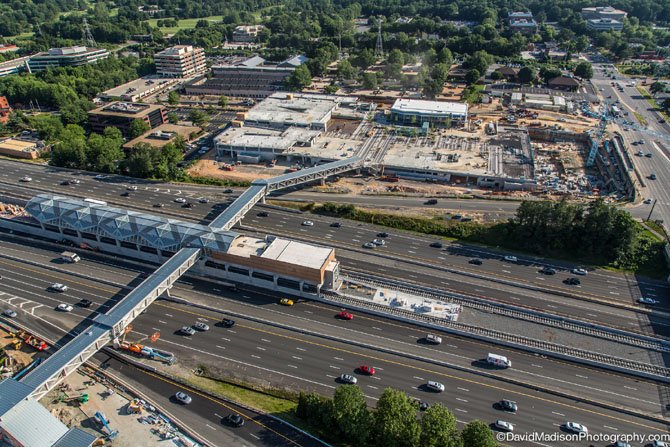 An aerial view of the Wiehle Avenue station, and the Reston Station development. Photo by David Madison Photography

Reston — Reston will be the first community along the Dulles Corridor to experience the Silver Line with the opening of the Wiehle Avenue Station. With stations at Reston Town Center and off Sunrise Valley Drive to come as part of Phase Two, the community is actively involved in planning for both phases.

The plaza of Reston Station under construction.

“When it comes to the Metro, we’re taking a multi-dimensional approach, working with groups like the Reston Citizens Association, the Alliance of Reston Clusters and Homeowners and the Reston Community Center, and making sure all of our views are being heard,” said Ken Knueven, president of the Reston Association board of directors. “We’re going to see a lot of impacts coming with the Silver Line. On one hand, there’s going to be a lot of added value with new businesses and jobs coming, but the other side of that coin is more people, meaning more congestion and traffic.”

Immediately to the north of the Wiehle Avenue station is the Reston Station development, the first mixed-used Metro development along the Dulles Toll Road. The development will include a public plaza, residential, hotel and retail uses. There will also be a 2,300-space parking garage, which was handed over to the county by Comstock Partners, the builders, on Aug. 12.

“Looking at Reston Station, and then what’s going around some of the stations in Tysons Corner, I think the Wiehle Avenue station is perfectly set up to be a well-functioning terminus for the Silver Line for the next few years,” said George Langford, who works within a mile of the new station. “Though I’ll admit I’m a little nervous about how the traffic is going to affect my morning commute.”

Knueven said that has been one of the top planning priorities when it comes to the Wiehle Station.

“As the terminus of the Silver Line until Phase Two is active, we’re going to see traffic at the station from Leesburg and beyond, coming to Reston,” he said. “Our big challenge is making it as easy as possible for people to access the new station.”

DEVELOPMENT AROUND THE METRORAIL STATIONS is part of the first phase of the Reston Master Plan Special Study Task Force. The first phase is expected to conclude by the fall, and will include recommendations to the county Planning Commission and the Board of Supervisors.

The bike storage area at the Reston Station development.

The second phase, expected to begin by early next year, will tackle the village centers in Reston, in hopes of turning them from regular shopping center to more community-oriented spaces.

Reston founder Robert Simon has said on numerous occasions that he intended for the village centers to more closely resemble Lake Anne Plaza, itself inspired by similar centers in Europe.

“Except for Lake Anne, the so-called village centers are just strip centers,” Simon said during a program at the Reston Museum. “The best thing for them in the long run is to have them torn down and built into plazas.”

Knueven said that during phase two of the Reston special study, the emphasis will be on development surrounding residential areas, rather than transportation issues.

“The village centers are under Reston Association governance, so we will be taking a primary active voice in their future,” Knueven said. “Lake Anne, and its future redevelopment is a good template for us to use when looking at the other centers, which we can hopefully make into a true village center where people can live, work and play. That’s a goal most of the centers have yet to achieve.”

Knueven said a main challenge will be to balance which centers need changes the most, such as Tall Oaks, against ones that would provide the benefits to the most people.

ANOTHER AREA OF RESTON that could be affected by the coming of Phase Two is the Sunrise Valley Wetlands. Located within walking distance of the Herndon-Monroe Park and Ride, the wetlands is a unique location in Reston.

The Sunrise Valley Wetlands, a 15-acre piece of land near the Herndon-Monroe Park and Ride, is an area residents hope is protected with the coming of the Silver Line.

“There is nowhere in Reston quite like it. It is by far our largest and best wetland. It is a favorite spot for environmental education, birds and birders, wildlife and nature enthusiasts, dog walkers and office workers looking for a quiet spot to take a lunch time walk,” said Claudia Thompson-Deahl, environmental resource manager for the Reston Association, before a tour of the wetlands. “It has been the nesting area for 23 bird species and 122 bird species have stopped to rest here on their migration journeys.”

The 15-acre property is a combination of naturally occurring wetlands and wetlands created to mitigate development elsewhere, and includes a large pond. Many residents are concerned about its future, given its prime location in relation to the Herndon-Monroe station and several office buildings.

“I lived in Herndon for almost 15 years before I knew about these wetlands. Even though I passed by them several times a week, I didn’t even know they were there,” said Kristie Ledbetter. “I try and stop by and walk around the property at least once a month, it’s a remarkable place. You park nearby and walk into the wetlands, and all of a sudden you’re not in the suburbs, or in a technology corridor, but in some kind of wilderness. It’s quite striking.”

Members of the task force’s environmental committee created a report on the wetlands, where they recommended language in any comprehensive plan changes that would protect and preserve the wetlands.