Metro and More Coming to McLean 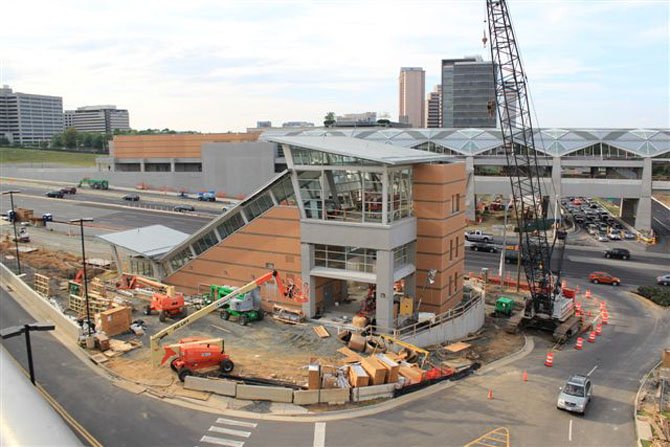 McLean — Over the next few months changes will be abound in the McLean area, not least of which will be the arrival of trains on the Silver Line. While the trains themselves will carry people to and from McLean to other areas of the region, the areas surrounding the stations are undergoing many changes themselves.

Tracks weave through Tysons Corner along Route 123. Cranes are working on the office, residential and hotel being built at Tysons Corner Center.

“We’re currently in the midst of turning Tysons from an urban office park into a true urban center,” said Michael Caplin, executive director of Tysons Partnership, a group that promotes the development of Tysons Corner. “There are approximately 45 million square feet of structures there currently, and over the next 35 to 40 years we’re going to see another 45 million square feet of building, mostly vertical."

The changes destined for Tysons will begin by making it a distinct entity of its own.

“We’re currently awaiting permit review for all new signage around Tysons, to let people know that’s where they are,” Caplin said. “We’ve released a new logo, which incorporates the shape of Tysons in the ‘O’ in the logo, as well as colors that pay tribute to the area’s past, when it was known as Peach Grove and when it was a dairy farm, which was as recently as the 1950s.”

The logo will even adorn the water tower in Tysons, but depending on the weather when it is approved, it could be later.

THERE ARE CURRENTLY PLANS to install about 200 new streetlights along Route 7, along with a line of trees, to give a “grand avenue” feel.

Other things the Tysons Partnership has been working on include: an initiative from local landowners to “adopt” the roads in front of their location to provide landscaping, five outdoor festivals scheduled in 2014 and a farmer’s market. Next year also will see the opening of the new Tysons Corner station plaza as well as three new circulator bus routes. The Fairfax County Park Authority is also in the process of developing a parks master plan for Tysons, which is expected to be released this fall.

“We’ve had great discussions and attendance from all the stakeholders, and I’m feeling a great sense of commitment to all parties involved who are very excited about what’s possible,” Caplin said. In other areas of McLean, two parks are currently undergoing the master planning process from the Fairfax County Park Authority. 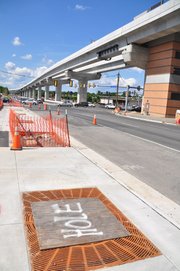 New sidewalks and places for trees and streetlights along Route 7 in Tysons Corner, part of the coming improvements to the area.

The process on McLean Central Park began last December, and the draft plan was presented in mid-June. Major changes in the plan include: the addition of an amphitheater at the southern section of the park and a new circular parking area planned northwest of the adjacent Dolley Madison Library.

The McLean Citizens Association has released a resolution in response to the draft plan. In it, they express measured support for the amphitheater, provided that another section of the plan, an extension of Elm Street into the park for a drop off point, instead be located parallel to Ingleside Avenue.

Salona, a 51-acre historic property, is also undergoing a planning process that includes the park authority, as well as a task force made up of local residents, environmental groups and other community stakeholders.

Fairfax County purchased 41 acres of the property in 2005 for $16.5 million, and has since commenced a master planning process to find ways to use 10 acres closest to Dolley Madison Boulevard. The remaining land is protected by a conservation easement.

At their most recent meeting, the task force said that they hope to finish their recommendation by the end of the year.

ANOTHER LOOMING ISSUE of concern to McLean residents is a proposal from the county Department of Planning and Zoning to establish long-term permanent housing that would serve households with an income of no more than 60 percent of the area median income.

According to the proposed amendment, the studios would be no more than 500 square feet, and would be located on a parcel of land that fronts and has direct access to a collector street or major thoroughfare.

“There are some strong advocates for the proposal in the community, as well as many residents who have expressed concerns with how the county will maintain neighborhood integrity while meeting the demand for housing,” said Sally Horn, president of the McLean Citizens Association. “We expect this to be a big issue in the fall, one that’s very important to the community.”

There will be a public hearing on the proposal in September, and the Board of Supervisors is expected to make a decision by the end of the year.