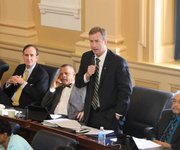 Delegate David Bulova (D-37) speaks on the House floor during a session of the General Assembly.

A: The big one from last year was transportation, and it would be great to keep that momentum going into 2014. I see 2014 as being a potentially very productive year and a way to differentiate Virginia from the federal government and the gridlock we are seeing up there.

Q: What are some issues that should be discussed in the General Assembly?

A: Education. I see this upcoming session as focusing on a couple big areas. Education will certainly be a major focus. It is critical to ensure that the state steps up to the plate and that we fully fund re-benchmarking so that our localities don’t have to make up that difference with higher property taxes. Education is a state-local partnership, and this will be a big deal to make sure we are fully funding education.

The other big one is the Standards of Learning. There’s a lot of talk of the idea that we are forcing teachers to teach to the test, and we are taking the critical thinking skills out of our education process because you’re basically memorizing in order to pass your Standards of Learning. You want to have the accountability, but at the same time, how do you rebalance the process so that we aren’t constantly testing and making kids memorize rather than learn the skills that are necessary to compete in a global economy. My greatest fear is that we’ll talk about it a lot, and then nothing will get done because it’s a complicated subject. It’s one of the bills that I’ll be putting in-how do you structure a committee or commission to look at your standards of learning and change them in a way that is meaningful for Virginians?

Health Care. One debate with Health Care is whether or not to move forward with Medicare expansion in Virginia. The important part is for the debate not to center on whether you agree or disagree with the federal health care law. The issue is whether Virginia is going to take advantage of billions of dollars of poor uninsured residents in Virginia.

Mental Health Reform. I have no doubt that we’ll change the way Virginia does mental health right now. The question is how far we’ll be able to take that.

Q: What do you think we can expect from Governor-elect Terry McAuliffe?

A: What I’m looking forward to is really focusing in on helping to strengthen Virginia’s economy, helping to diversify Virginia’s economy; that is what he campaigned on, so I expect a flurry of legislative initiatives to move us in that direction. For me, I’m hoping he’ll focus on the potential for some of our research universities to help with job creation.

Q: What are some of the biggest challenges affecting Fairfax residents?

A: Especially for Northern Virginia, a lot of it comes down to how expensive it is to live here. There are so many things that factor in to that. You want to make sure that if you work here, you can afford a home here and can send your children to school here. Far too often, you have people who are moving further and further out, which contributes to sprawl and its own problems.

Del. Eileen Filler-Corn (D-41) speaks to members at a committee meeting. Filler-Corn hopes to focus on transportation, education, and the economy this session.

A: The Transportation Bill was a major success of 2013. That is going to allow us to move forward to alleviate congestion, improving our roads, and road maintenance.

Q: What are some of your priorities this legislative session?

A: My priorities always reflect those of my constituents, including education, transportation and the economy. I think a priority this year will be continuing to protect our world-class schools against cuts and ensuring that our kids will be successful. Improving transportation continues to be a focus. Creating new jobs and improving the economy always continues to be a priority.

We really need to look at our education system and figure out what is working and what’s not. I have a wide variety of bills that I’m working on this year. I’m working to figure out which ones will be introduced and which won’t. Making college affordable for our students and family is an issue I will continue to work on.

I will also be introducing again keeping the polling places open until 8.

Q: What are some challenges facing the community?

A: I think we have to look back at sequestration and the government shut down, and look at the effects that had on so many families in our area, with layoffs and furloughs. The effects continue to be felt here.

Q: What do you think we can expect with Governor-elect Terry McAuliffe?

A: I’m looking forward to working with the governor-elect and his administration. He’s put together a very impressive administration when you look at the appointments he’s made so far. I think he’s very focused on economic development and job creation, and he’s spoken a lot about SOL reform and education, and those are important issues to me and my constituents.

Q: Do you think partisanship will be a major issue this session?

A: I certainly hope not. I knocked on a lot of doors this past campaign and I keep very well in touch with my constituents. I heard from folks day in and day out that they are concerned with public safety, education, transportation, and they don’t want to focus on social issues. They are looking forward and they are hopeful. They are anticipating that this will be less partisan and more focused on the issues that we can really move forward on and make a difference. They are hopeful that we are going to focus on the issues.