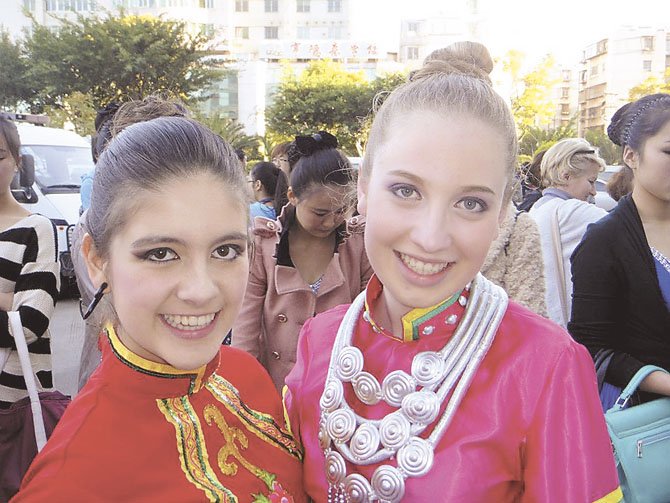 Sofia Falçao from Portugal and Molly Reiner of Potomac wear their costumes before the televised taping of the closing ceremony in China. Photo Contributed

At the Great Wall, Molly Reiner is with Matt Griffith in the middle and Theresa Wong on the left. Wong was a competitor from California.

Potomac — Potomac’s Molly Reiner has been fascinated with the Chinese language and culture since she was first exposed to Chinese in 4th grade at Sidwell Friends School in Washington D.C. Her diligent study of the language since 7th grade paid off last April when she competed in the Chinese Bridge Competition sponsored by the Hanban Confucius Institute at the University of Maryland. Her team of three was thrilled when they won the contest. The prize was a two-week, all-expense-paid trip to Kunming, China to compete in the 5th Annual Chinese Bridge Competition for Foreign Secondary School Students in November 2012.

Nearly 300 high-school students from 45 countries participated in the competition which was themed, “Learn Chinese, Double Your World.” The eight-day competition showcased students’ Chinese language capabilities, knowledge of Chinese culture and their personal talents. Reiner’s triumphant team was one of three that placed second in the competition — and she won 10th in the overall competition — securing a scholarship to study in China for a year.

The Chinese Bridge program serves to connect students from all over the world with China and offers a channel for a new generation of students to communicate, share and understand one another better.

“The best experience was meeting kids from Russia, Argentina, Serbia, Finland and so many other countries in the world,” said Reiner. “The biggest challenge was communicating with my roommate who was from Costa Rica and spoke only Spanish and Chinese. Since I don’t speak Spanish, we talked in Chinese. We also had to speak Chinese to all the volunteers — so I became much more fluent while I was there.”

Molly Reiner with her group performing the song "Yunnan Mei" or "Beautiful Yunnan" at the closing ceremony. They are wearing the traditional costumes of the different ethnic minorities in Yunnan Province.

“I loved the town of Kunming,” she added. “It is the capital of Southwest China’s Yunnan province, near the border of Tibet. With its perpetual spring-like weather — always 70 degrees and sunny — Kunming is known as the ‘City of Eternal Spring.’ It is lush with plants and beautiful flowers. My favorite sight was the Stone Forest. There were giant limestone rock formations everywhere. It is also a city that is very proud that their province has the most ethnic minorities of any province in China.”

The conference celebrated this cultural diversity with their opening and closing ceremonies. “We practiced for days and days for these events,” Reiner said. “We did ethnic dances, wore elaborate costumes and worked for hours with choreographers and coaches. The event was televised throughout China.”

During the eight days, they participated in tasks related to the many ethnic minorities. Each contestant presented in Chinese about his or her life and journey with Bridge. Reiner, whose name means “Jasmine Flower” in Chinese, sang and played the piano. Students were also required to take tests about Chinese culture.

Reiner is the daughter of Charisse and Jonathan Reiner of Potomac. She traveled with her parents and sister, Jamie to China in 2008 and then returned after her sophomore year with other students from Sidwell Friends. Now a senior, Reiner is captain of her school’s “It’s Academic” team and serves as a teaching assistant in “History of East Asia” class. She plans to major in international relations or foreign policy and minor in Chinese. She is also looking forward to studying for an entire year in China.