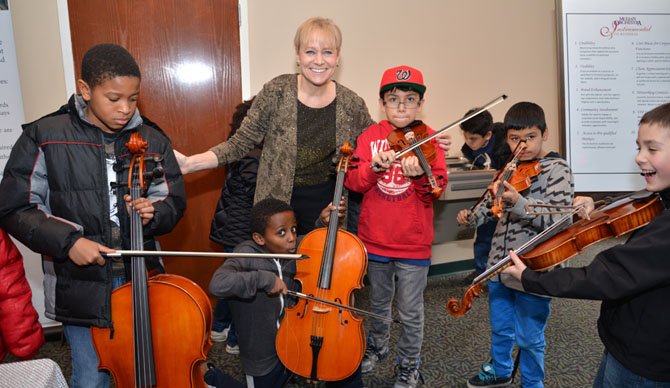 The youngsters from the Alternative House program are getting their musical tips from none other than the McLean Orchestra Music Director and Conductor Maestra Miriam Burns during the pre-show Musical Petting Zoo Hour. Photo by Andrea Worker.

For the first time in its more than 40 year history, the McLean Orchestra presented a “side-by-side” free concert on Sunday, Feb. 3, seamlessly pairing the professional musicians of the orchestra with their young counterparts from Principal Conductor Paul Kim’s McLean Youth Orchestra. Under the baton of McLean Orchestra Music Director and Conductor Miriam Burns, the combined musical entities performed a program titled “Musical Fairy Tales,” an abbreviated version of the previous evening’s concert. Grammy-nominated violinist Jenny Oaks Baker was the guest soloist, and led the way, playing a series of well-known Disney tunes from Mary Poppins, Pinocchio and The Lion King, to name just a few.

In keeping with the youthful atmosphere the orchestra partnered with Alternative House, a local non-profit organization that provides an array of services to homeless and at-risk youth; it was obvious by the head-bobbing, foot-tapping, and even a bit of singing, that the event’s special guests recognized and appreciated many of the selections. Several dozen children from Alternative House programs arrived at the concert via transportation generously donated by Reston Limousine.

What did attendee Simon Ghirmay think was the best part of the afternoon adventure? “The Petting Zoo!” he exclaimed. No. They did not have a single llama, or goat or a flock of chickens on display in the lobby of the Oakcrest School in McLean where the orchestra performs. This was a “musical petting zoo.” Before the concert got underway, Dalton Potter and wife Ally of The Potter Violin Company in Bethesda set up a musical menagerie with a variety of stringed instruments that the children—and even a few adults—were delighted to handle and give a try. Members of the orchestra joined Potter in offering a few tips to the “petters” and before long the lobby was filled with the sounds of music, mixed with a lot of excited chatter.

McLean Orchestra President Aileen Pisciotta expressed her delight at being able to offer this special performance to the youngsters from Alternative House. “Today is extra special,” said Pisciotta. “One of our missions is community involvement. It’s a privilege to have these children here today and give them a chance to experience orchestral music up close and personal.” Pisciotta involved her young guests right from the beginning of the concert with her opening remarks. She got a lot of raised hands when she asked if there were some potential future orchestra recruits in the seats.

Executive Director John Huling seconded Pisciotta’s sentiments. “And,” he added, “at the same time, we are giving our young orchestra members an amazing educational experience, playing alongside the experienced orchestra members with a renowned maestra and a world class soloist.”

To keep up with the innovative activities of the McLean Orchestra, visit their website at mclean-orchestra.org. For more information about the services and needs of Alternative House, visit www.thealternativehouse.org.