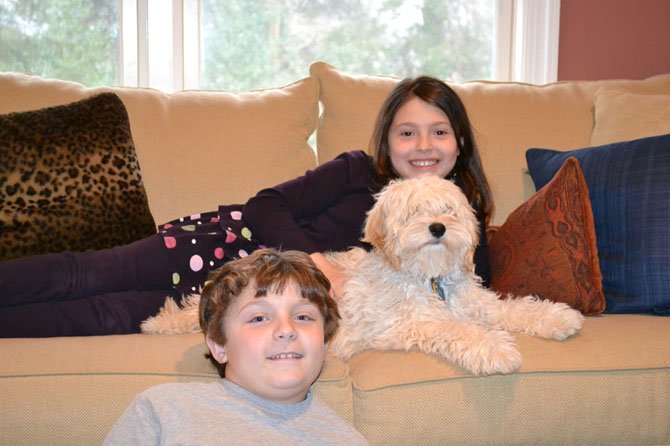 Alex and Christopher Roberts with their cockapoo, Duffy. Photo by Lori Baker.

SUMMER: It was nearly seven summers ago that the Allen family met the runt of a littler of toy poodles from a Maryland breeder. From the moment she arrived at their McLean home, “Summer” was part of the family. “She just means everything to our family,” said Melissa Allen, who shares the home with her husband John and their three daughters.

Summer, who is apricot in color and very friendly, loves to sleep in, and often moves room to room to curl up with the latest sleeper. She weighs all of five pounds and likes to chase squirrels. But when the occasional squirrel turns to look back at her, she’s been known to run and hide.

Over the years, the Allens have learned to clear the dinner table quickly. Otherwise Summer will jump onto the dinner table for any leftovers. “Sometimes I’ll look and say, ‘oh my goodness Amanda, you ate every drop of that dinner,’” said Melissa Allen. “But then I look and realize, this looks like a licked plate.” 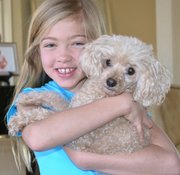 MARLON: After nearly a year of lobbying for a dog, fourth–grade twins Gwen and Owen Eichfeld finally convinced their mom, Nancy Crowe, to get a family dog last April. The children’s father, Andy Eichfeld, had already bought into the idea. In fact, he was the force behind the campaign.

So off to Petsmart they went, to visit an adoption day sponsored by the Lost Dog and Cat Rescue Foundation. Though they went in search of a dog named Laura that they saw on the foundation’s website, which they knew got along with cats, another family was already interviewing for her. That’s when they spotted Marlon, a boxer-pointer-Jack Russell terrier mix. “He was just sitting there politely,” Crowe said. And he gets along with cats.

“The first thing they do when they get home from school is play with him.”

The children were excited to bring him back to their home in McLean. When they walked into the house with Marlon for the first time, he immediately ran and jumped onto the kitchen table. Luckily, he was very responsive to the word “no,” Crowe said.

Marlon is an extremely sweet dog that likes to take naps with the family cat, and sleep with fourth grader, Owen, at night. “The kids love him,” Crowe said. “The first thing they do when they get home from school is play with him.”

Although Marlon loves the family cat, Linden, he is fortunately oblivious to the Eichfeld’s other pets, 2-year-old geckos named Sergeant and Lester.

MR. WHISKERS: When McLean resident, Diana Reing met Mr. Whiskers in 2003, he was a very skinny, skittish cat. “He looked like a rail,” said Reing. Reing’s cousin, Dorothy, invited her to come meet the cat, which had been abandoned in an Arlington apartment after delinquent tenants moved out. Reing’s cousin knew that her previous cat had recently died, and her childhood cat was named Whiskers. “How could I say no?” said Reing. So she brought Mr. Whiskers home.

Reing’s last cat was an outdoor cat. So when Mr. Whiskers wanted out, she started letting him out for short periods. Not one week after arriving in his new home, Mr. Whiskers disappeared. He was gone for a few nights. Reing worried, and put up posters, drove around searching for him, and left the previously unused pet door unlatched. Mr. Whiskers did not know about this pet door. So when Reing woke up in the middle of the night to the sound of soft footsteps, she froze. In came Mr. Whiskers; and he jumped on her bed wet and dirty. Both were relieved that he had returned.

Mr. Whiskers is still fairly shy, which is to be expected. “He’s good for me,” said Reing.

DUFFY: A few months ago, just before Christmas, McLean fourth grader, Christopher, and his third grade sister Alexandra “Alex” Roberts came home from Christopher’s basketball game and found a note from Santa. They were surprised since it wasn’t yet Christmas day.

“I hope that you don’t mind that I am giving you an early Christmas present,” wrote Santa. “I didn’t want Duffy to have to ride in my sleigh all night on Christmas Eve, just in case it’s cold. So I am bringing him to you a little early. He is very excited to be joining the family,” the note said.

The children ran to the Christmas tree and under it sat a little blonde cockapoo. He sat so still that the kids thought he was a stuffed animal. “We ran toward him and hugged him, and he was really shy,” said Alex.

Needless to say, Duffy has warmed up, and is no longer shy. “He goes upstairs and steals stuff, and then he comes down and we have to chase him around,” said Christopher. He especially likes to steal socks. The whole family loves him, including their nanny, who is from the Philippines and speaks Tagalog. Duffy now responds to commands in two languages.