Something to celebrate for area motorists. 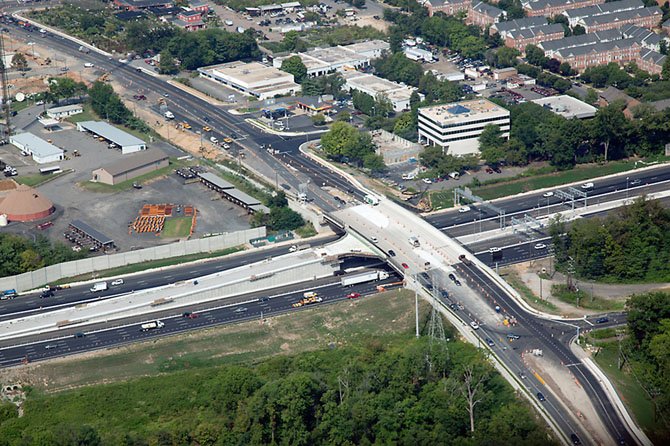 In 2012, the completion of the 495 Express Lanes and progress made on Phase One of the Dulles Metrorail were something to celebrate for area motorists faced with lane closures and detours for the past few years.

In August, cars are lined up on the Westpark Drive connector in Tysons Corner to test the new 495 Express Lanes.

The opening of the 495 Express Lanes was the biggest transportation development in 2012. Most of the 50 overpasses were completed in 2011, and in the final year of construction, the Braddock Road and Leesburg Pike (Route 7) access ramps were completed. The Braddock Road ramp is an access point for cars heading north on the express lanes. At Route 7, the ramp provides a southbound access only. Both ramps feature 500-ton box beams that required multiple cranes and full road closures of I-495. Pavement was laid for the new lanes throughout the corridor that are now general purpose lanes. Over the summer, the electronic tolling system was tested and tweaks were ironed out in the control center off Edsall Road in Alexandria. The lanes opened just before Thanksgiving, earlier than scheduled.

The 23-mile Dulles Corridor Metrorail Project is a two-phased rail project that will give users a one-seat ride from Washington, D.C. to Dulles Airport. Phase One extends Metrorail service through five new stations—four in Tysons Corner and one at Wiehle Avenue on the eastern edge of Reston. Phase Two includes six additional stations from Wiehle Avenue to Route 772 (Ashburn), serving Reston Parkway, Herndon, Dulles Airport and eastern Loudoun County. The Metropolitan Washington Airports Authority (MWAA) is building and managing the project. Phase One is scheduled to open in fall 2013, and Phase Two in the following years.

Also in 2012, the I-66 Pavement Rehabilitation Project was completed. This project reconstructed 6.5 miles of deteriorated pavement between Route 50 and I-495. In Merrifield, Route 29 was widened to three lanes between Merilee Drive and I-495, and Gallows Road was widened to three lanes from Gatehouse Road to Prosperity Avenue. Away from the Tysons Corner area, VDOT was also working to rehabilitate the structurally deficient Beulah Road bridge over Wolftrap Run in Fairfax County.