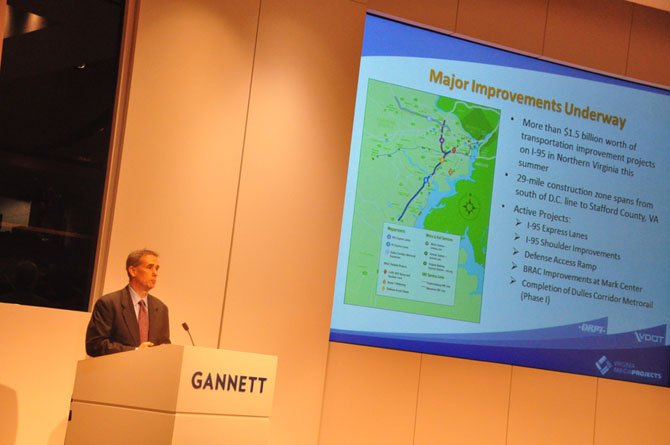 McLean — Developers of transportation projects in and affecting Tysons Corner gathered at the annual Keep Tysons Moving event Thursday, June 27, an opportunity for local companies to hear the latest updates on the 495 and 95 Express Lanes, Dulles Metrorail and more.

“At this time last year we were preparing for the opening of the 495 Express Lanes,” said John Lynch, Regional Transportation program director for VDOT. “The success of that project has allowed us to move on to other projects. That was a good four years of construction we had there, and we’re seeing the benefits now. … Our goal was 10 percent reduction in traffic through our construction zones, which we were able to see.”

Lynch referred to other projects such as the Tysons Bus Circulator, which had its one-millionth passenger in April, van-pooling setups, which provided 175 trips during each weekday for long-distance commuters and telework programs used by 34 Tysons companies eliminating approximately 500 car trips per day.

There is currently $1.5 billion in projects scheduled for this summer along I-95 in Northern Virginia, which includes the 95 Express Lanes, which will be 29 miles of variable-priced toll lanes from Washington, D.C. to Stafford County.

THE PRELIMINARY design for the lanes is done, and construction is approximately 35 percent complete. Lynch said once complete, there will be a “seamless express lane system connection 95, 495 and 395.” Metrorail through Tysons Corner and to Wiehle Avenue in Reston is the other major project expected to be finished by the end of the year.

Marcia McAllister, communications manager for Dulles Metrorail, said that construction on the Silver Line Phase One is expected to be finished around September. 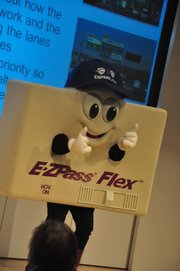 All utility work is completed and all station structures, pedestrian bridges and entrance pavilions are in place. The project includes 124,350 feet of track, 6 miles of aerial guide way, 2,769 concrete segments, 39 miles of cable and 21 utility relocations.

The project also necessitated the shifting of Route 7 in Tysons Corner by more than 60 feet. McAllister said construction is about 94 percent complete, and Phase One of the Silver Line is expected to be open after Christmas.

McAllister said that a notice to proceed with construction of Phase Two, which will run from Wiehle Avenue to Ashburn, and will include a stop at Dulles International Airport, is expected by July. Design, surveying and soil testing, mostly along the median of the Dulles Airport Access Road, will begin this summer, and construction is expected to go until late 2018.

Another big change coming with the arrival of Metrorail is the changes to the Fairfax Connector routes in Tysons Corner. Throughout the county, there have been big changes to the routes, resulting in a 10 percent service increase.

Christy Wegener, manager of Fairfax Connector Operations and Planning for the Fairfax Department of Transportation, said that the new three-route circulator system in Tysons provides a very “robust” service plan.

“The circulator routes are designed to be the last mile connection to and from rail stations and destinations within Tysons,” she said.

THE ROUTES will serve the three westernmost stations, Tysons Corner, Greensboro and Spring Hill Stations, with stops every 10 minutes during rush hour on weekdays, and 15-20 minutes at other times. It also includes an enhanced bus feeder system from Vienna, Merrifield and McLean.

Bus Route 422 will serve the Greensboro Station, starting at the station and traveling clockwise to Greensboro Drive, International Drive across Route 123, looping around the mall, back to Route 7, to Boone Boulevard and Howard Avenue before returning to the station.

Route 423 is run seven days a week to connect Tysons Corner and Spring Hill Stations. It will start at the Tysons Corner station, go along Route 123 to International Drive, along Greensboro Drive, stopping at the Spring Hill station, along Tyco Road, Jones Branch Drive, Westpark Drive, then back to Tysons Corner Station.

Route 424 will start at the Spring Hill Station, travel along Tyco Road, down International Drive, then go counter-clockwise along Westpark Drive and Jones Branch Drive.

The final project still in the works for Tyson Corner is the Jones Branch Connector, which will connect Route 123 with Jones Branch Drive.

The connector will support cars, as well as transit, bicycles and pedestrians. The project plans are about 30 percent completed, with construction expected to start in the summer of 2016 and finishing by spring 2018.