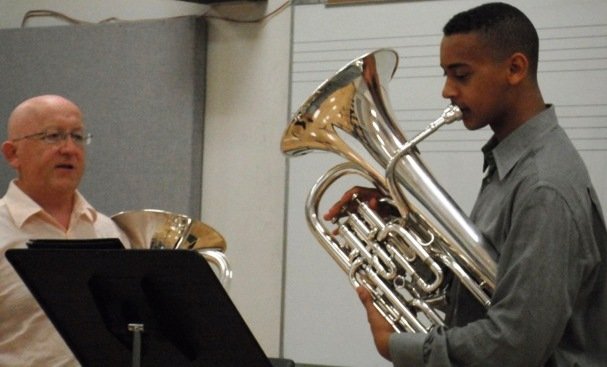 Joe Broom of McLean, a sophomore at Thomas Jefferson High School of Science and Technology (TJHSST), is a National YoungArts Foundation Finalist in music. Chosen from approximately 10,000 applications submitted by students in nine disciplines of the visual, literary and performing arts, he will participate in a life-changing experience provided by the National YoungArts Foundation. He is the first TJHSST student to be selected as a YoungArts finalist.

This year, during the 32nd annual YoungArts Week in Miami, Fla. from Jan. 6-12, Broom will join 151 other finalists in a week of intense master classes with internationally renowned artists such as Adrian Grenier (1994 Alumnus in Theater), Marisa Tomei, Bobby McFerrin, Andrew Rannells (1997 Alumnus in Theater) and Bill T. Jones (YoungArts artistic advisor). Students will also have the opportunity to share their work each evening through performances, readings, exhibitions and screenings that are free and open to the public. YoungArts Week will culminate in An Affair of the Arts Performance and Gala on Jan. 12. YoungArts Week performances will be live streamed on youngarts.org.

Broom has earned recognition for his musical talent. In 2012, he won a seat in the National Symphony Orchestra Youth Fellowship program—the only euphonium player in the fellowship’s 32-year history. He was a finalist in the 2012 U.S. Navy Band High School Concerto Competition, and he performed with the band at a Memorial Day concert. As a freshman, he was principal euphonium of the All-Virginia High School Band and he won the Friday Morning Music Club’s Ross-Roberts Competition for High School Players. He is a member of Brass of Peace, an intensive training and performance program for gifted high school students, which performed at the Kennedy Center. He studies music with Lee Rogers, principal trombone of the Washington National Opera Orchestra, and is coached by Steven Mead, internationally renowned virtuoso euphonium soloist.