A Family Made Whole
Votes

A Family Made Whole

After a tragic loss, Reston couple creates a family through adoption. 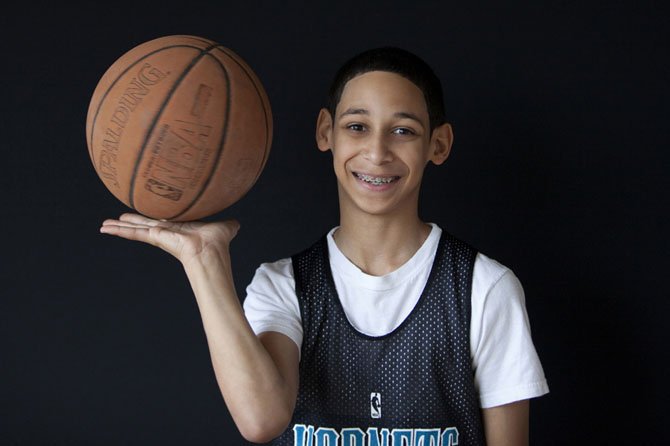 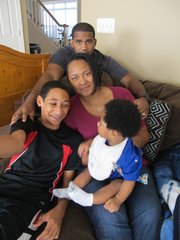 Brothers: Kenny (left) tries to get Elijah to look forward last October, but Elijah is more interested in Kenny’s smile. Chris and Tiffany Granville, of Reston, follow the photographer’s instructions.

The Granvilles look like a made-for-TV family. On a bright October afternoon, Chris, a computer engineer, is teasing his teenage son, Kenny, about what kind of pet to adopt, while Tiffany sits on a sofa, cradling Elijah, Kenny’s baby brother, who has just woken up from an afternoon nap.

Kenny is lobbying hard for a dog or—at the very least—a guinea pig or hamster.

“We did not want what happened to us to define us.”

“What I’m saying is you start with the fish, okay, and then you move up to guinea pig or something else,” Chris says.

“Can you tell we’ve been talking about this for just a little while?” Tiffany asks a visitor, rolling her eyes in mock exasperation.

It’s quickly apparent the Granvilles are a close-knit family who like spending time together.

What is not so apparent is how this family came to be, and why an ordinary Sunday afternoon laughing with two children is a minor miracle for the Granvilles.

Chris and Tiffany, both in their 30s, were married in New York City on Christmas Eve, 2007. One of three children, Chris was raised in Queens. Both were very close to their parents and grandparents, whom they credit for inspiring their Christian faith.

IN FEBRUARY 2008, the couple moved to Reston, where they both had demanding careers as computer engineers. They also found out that same month that Tiffany was pregnant.

“We were like ‘wow.’ We just got married, and now we’re going to have baby. We were living the dream,” Chris said.

Jamison Granville was born on Oct. 23, 2008. He was a healthy 8.6 pound baby, and the light of his parent’s life. When Chris’s mother was diagnosed with aggressive kidney cancer that spring, Jamison kept a smile on his grandmother’s face as she went through grueling chemotherapy sessions.

“He was my mother’s first grandchild. She and Jamison were tied at the hip,” Chris said. 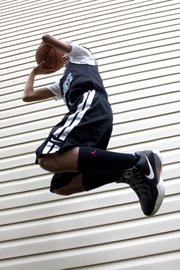 When Chris’s mother died on July 4, 2009, both Chris and Tiffany were devastated by the loss, but they took comfort in Jamison’s smile, their large network of friends and family and their faith.

Like many working parents, the Granvilles had carefully researched and selected a day care center for their child. It wasn’t unusual to get a call from staff at the center if Jamison was sick, or if other minor issues cropped up.

But on Sept. 16, 2009, Tiffany received a call from the center’s director. She said she sensed something was wrong immediately.

“I got a phone call about 3 p.m. The director said she needed to meet us at Reston hospital. She wouldn’t give me any other information,” Tiffany recalled, pausing. “Jamison was 10 months and 24 days old…”

Chris said he got a message from a detective. “He said to call this doctor, and the doctor said you have to stop whatever you’re doing and get here,” Chris said. “I didn’t know what was happening.”

“I can’t tell you how I got from my desk on the sixth floor to my car,” Tiffany said. “When I got there, doctors were working on him, but I could tell he wasn’t there anymore. . . . You feel like you’re in a movie, or a dream. You get through it, but you’re not there.”

Tiffany said the pain of losing Jamison was almost unbearable, and even her strong faith in God could not keep her from waking up some mornings and thinking there was nothing left to live for. “I have to be honest; there were days I did not want to be here.”

But it was the couple’s strong faith in God kept that kept them moving forward.

“We became more involved in our church, but at that point, it’s just a day-by-day existence,” Chris said. Tiffany said she drew strength from her grandmother, who had also lost her firstborn son. Her grandmother went on give birth to eight children, and adopted two more.

“I pulled from her strength. I thought to myself, this woman from Louisiana, with an eighth-grade education, through all this adversity, she was able to overcome it in a time when things were horrible for black folks,” Tiffany said. “I remember what a loving and patient person she was . . . I started to think about everybody I had here . . . I thought we all have to leave one day, so you have to make a positive impact while you’re here. We did not want what happened to us to define us.” 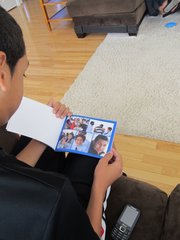 THE COUPLE, who had always talked about adopting a child, had maintained friendships with other couples who were foster parents, and they decided to explore that option.

“God works in mysterious ways. We actually used to go on outings with this couple and their foster children before Tiff and I were married,” he said. “We still had a lot of love to give.”

“That was the core of it, the love we had for each other,” Tiffany said. “You know, a lot of people say that when you lose a child, it tears a couple apart. Well, nothing could tear me away from him. He is my rock. His mental strength is astounding.”

They connected with a small agency in Fairfax County called FairfaxFamilies4Kids, a unique foster-mentoring program run by the Department of Neighborhood and Community Services. Created in 2005, the program’s mission is to build bonds between volunteers and foster children, a majority of whom are 14 years old or older.

According to Beverly Howard, Ph.D., coordinator of the program, every year in Fairfax County, as many as 20 teens in foster care leave the system without a family and are unable to return safely to their parents or relatives.

The children who wait are typically African-American, and are age 9 or older when they enter foster care. They have emotional, medical and educational needs. Many have lived in a series of foster homes or residential facilities.

Kenny was one of the children in the program when the Granvilles decided to become mentors. 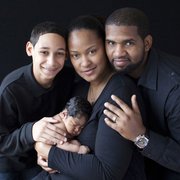 Howard said volunteers who become mentors have a lot of flexibility, and there’s no specific amount of time mentors must spend with children. Some are assigned a particular child while others work with several children. Every month there are group activities for the participants and their mentors.

“We want people to know they can get involved without feeling too much pressure,” Howard said.

Mentors can attend as many group outings as they want, depending on their schedule.

Outings have included a Christmas Cruise on the Potomac; the DC Kite Festival; fundraising events for the homeless and a variety of sports events and clinics, from basketball to handball. Farm Day, held twice a year in Ashburn, is a favorite event for the children. Donated by a benefactor of the program, the event is held twice a year in Ashburn, and includes horseback riding, bike-riding, games and a picnic.

Howard said all the activities are structured to allow “natural matches” to develop over time as the youth interact with the volunteers and actively help select their mentors. “Mentors see the value, the strengths and possibilities in the youth and the youth begin to form trusting relationships with the mentors,” she said.

Kenny met the Granvilles during Farm Day. He had just turned 13, and had been in a series of foster homes since he was 9 years old.

Before formal foster care, he was living sporadically with his biological mother from the time he was 3 years old.

Born in Dumfries, Kenny’s mother had substance abuse problems. When she could not care for him, he would stay with her friends for weekends—or weeks at a time. When he was placed in foster care full-time, he had no more contact with his biological mother.

Sitting on a sofa at home, Kenny shows a visitor a book of photos from several outings. When asked if he remembers the first time he met Chris and Tiffany, he smiles broadly, and mentions that he left his coat in their car so they would have a reason to seek him out again.

The Granvilles said they felt an immediate connection to Kenny, and they would have come back to see him, even if he hadn’t left his coat in their car.

“We had been going to different events as mentors, and then Farm Day came along,” she said, shaking her head and wiping away tears. “It was weird. There was this big gush of wind and this kid came out of nowhere. Literally, leaves are flying around, and I saw Kenny playing… I said to Chris ‘I feel like he’s going to be our child.’ I mean, we thought we would adopt a younger child, but we just jelled with him.”

“As soon as they walked in, I went up to talk to them,” Kenny said.

“There was just something about him. His smile, his sense of humor, something that tugged at our hearts,” Chris said.

Kenny began spending weekends with the couple, playing basketball with Chris, watching football games, and just being a “regular” kid with a family.

“Everything just fit,” Chris said, “It felt like it was meant to be.”

Tiffany and Chris said there’s no one “aha” moment they can point to when they decided to adopt Kenny. “It just seemed like the natural next step,” Chris said.

As the Granvilles spent more and more time with Kenny, they became determined to adopt him. And then the couple got a surprise that some might consider a “game-changer.”

She learned she was pregnant with Elijah.

“And no, we never thought about not adopting Kenny,” she said, laughing.

Kenny was formally adopted by the Granvilles when he turned 14. Elijah was just weeks old, but “we wanted him there to be with his big brother,” Chris said.

During the adoption proceeding, the judge asked Kenny if there was any reason not to go forward, and why he wanted to be adopted.

"Because I love them. And they love me,” Kenny said.

“There wasn’t a dry eye in that courtroom,” Tiffany said.

NEXT WEEK: Interviews with mentors and child who aged-out who is now homeless.