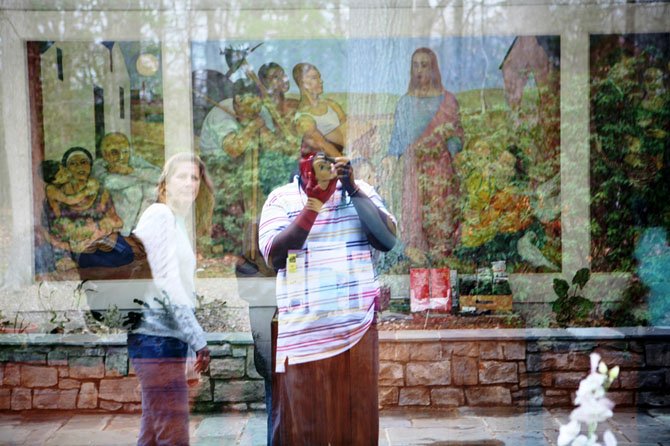 Joan Brady inspired TW, one of the foster youth, to learn photography. This is his award-winning photo for The Voices for Change contest. Joan Brady is pictured in TW’s photograph. TW

On Monday, Sept. 10, 2001, Joan Brady of Great Falls had just started a three-month sabbatical from her job with an Internet company. Newly-married, Brady, who was 36 years old at the time, was exhausted from 80-hour work weeks in a rigid corporate environment. She wanted time that fall to contemplate what to do next with her life.

Brady photographed a 15-year-old girl in the program looking at one of the little books Brady creates for the children so they have pictures from each of the events.

The terrorist attacks, and the moving stories of heroism and tragedy on 9/11, indelibly left their mark. Brady, like many Americans, was inspired to do something new, to take more chances, to change direction.

“After that tragic day, it was hard to imagine going back to a job that had seemed critically important, but now felt largely meaningless,” she said. She thought she might become a social worker or a teacher, a job where she could make a difference in other people’s lives. She decided to volunteer as a homework tutor at a group home for foster children.

As she struggled to find a way to motivate her students, she began “bribing” them with her photography. “Some teachers gave kids candy in exchange for completing homework assignments. I thought I’d try taking their photos and giving them copies,” Brady said.

Their reaction to having their photos taken surprised her.

“It made me realize that they didn’t have pictures of themselves, other than the one snapshot for their official file,” Brady said. “I came to understand the connection between their having their picture taken and self-esteem.”

According to child development experts, photos say “I’m important in this family.” They show a child he or she is meaningfully connected to others, and provide a visual symbol of nurturing, love and caring. Foster children, who are frequently shuffled from one home to the next, rarely have family photos.

“In those days, I actually wasn’t a professional photographer, just a gal with a point and shoot digital camera, trying to get through a three-month commitment I had made,” Brady said. “I took pictures of the kids in the group home, mugging for the camera, playing basketball, bike riding, playing on the playground and occasionally holding up a good report from school.”

She gave her students little $1 photo albums she purchased at Michaels so they would have a place to store their photos.

During a fundraising walk in 2006, youth in Fairfax Families4Kids were greeted by rapper Run DMC , who grew up in foster care. Pastor King Rhodes (left) organized the event.

She realized just how important the photos were to her students when she showed up at school one day and learned the photo albums had caused some trouble.

“It turned out that the kids weren’t allowed to take anything to bed with them and several had been caught taking their little photo albums that we were filling with pictures to bed with them,” she said. “It was in that moment that I realized I was doing something more than getting through the three-month commitment that I had made to be a homework tutor. I stayed on well beyond my three-month commitment.”

“Joan sees well beyond the labels that so many of our youth have gathered along their journey in foster care. She can see the gifted artists, the aspiring scientists, the comedians, the athletes, and the beautiful children waiting for an opportunity to bloom.”

By 2004, she combined her love of photography with her ability to connect with children and started Joan Brady Photography. She also began photographing foster children featured on Wednesday’s Child. During a shoot in 2005, she met Beverly Howard, the director of a small Fairfax County foster-mentoring program called Fairfax Families4Kids.

In Fairfax County, about 400 children are in foster care, and about 20 children, most of whom are 14 and older, are in the Fairfax Families4Kids program. According to Howard, these children are considered more difficult to place in adoptive homes because they are typically teens who have a range of special needs. Mentors provide one-on-one support and participate in monthly group activities. 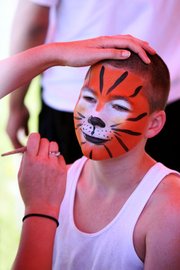 Fairfax Families4Kids hosts a number of events for foster youth and mentors. In the photo, a 14-year-old boy in the program is getting his face painted at a Fairfax festival.

“I got involved with the program when I met Beverly Howard, the director. She is a force of nature, a person no one can say no to. I have learned so much from her and have been so inspired by both her wisdom and her spirit,” Brady said.

She became the group’s volunteer photographer, shooting the children during their outings with mentors. Many of the children, especially the girls, didn’t like to be photographed. They thought they were ugly, unworthy of a photographer’s time.

In one photo, Kenny, a 14-year-old from Reston who was recently adopted, is high in the air, all legs and arms, about to make a powerful slam dunk. In another photo, Serena, 17, flashes a warm smile, her face framed in a cascade of long brown curls.

“Serena is a really interesting story. She’s a tough girl whose initial reaction of ‘don’t take my picture!’ evolved into ‘take a picture of me!’ and ‘How come there aren't more pictures of me in the book!’ She is such a sweet and thoughtful girl,” Brady said.

Howard said Brady’s photos capture the children’s creativity and give them a positive reflection, something most of them have never had. She said the children are empowered by getting their photos taken.

“Joan sees well beyond the labels that so many of our youth have gathered along their journey in foster care,” Howard said. “She can see the gifted artists, the aspiring scientists, the comedians, the athletes, and the beautiful children waiting for an opportunity to bloom.”

Brady doesn’t look like a fighter. She is petite, quick to laugh, and looks younger than her 48 years. But spend five minutes with her, and one quickly finds out how passionate and relentless she is about Fairfax Families4Kids.

“Actually, [fighting for children] started when I became a court appointed special advocate for a 9-year-old boy in foster care from DC in 2002. And yeah, I was surprised … surprised that doing what was right by children was something that most often required a fight,” she said during a recent breakfast.

“This is not just mentoring. Beverly has created a family, a family where one would not otherwise exist. It’s a family where kids are loved unconditionally, which, in my experience, is very rare for children in foster care who are most often judged by their worst behaviors with a blind eye turned toward their attributes.”

Sully District Supervisor Michael Frey, a champion of the program, was quick to praise Brady’s role in the program.

"While the mentors and volunteers are definitely the heart of FF4Kids, Joan Brady is definitely its soul,” Frey said. “I can't imagine where the program would be without her.”

Neither can anyone else connected to the program.

In 2009, when the program was in danger of being eliminated because of across-the-board cuts in the county budget, Brady marshaled an army of supporters, launched a “save the program” blog, and cajoled, begged and nagged officials to keep the program. (In 2010, the program, fueled primarily by the work of the mentors and volunteers, cost about $133,000 in a social services budget of more than $200 million.)

Brady appeared before the Fairfax County Board of Supervisors during the budget hearings. Her plan was to let the program’s youth speak directly to the supervisors.

County staff said no. That answer was not acceptable to Brady.

“That’s when we began fighting. I may have led the effort, but it was very much of a group commitment,” Brady said. “We knew that these kids were virtually invisible to the community. We knew that they could not stand up for themselves. We wrote letters and emails and met individually with members of the Board of Supervisors. We went directly to the Human Services Council, writing to them as well.”

Supporters scheduled their testimony so that they had a block of time, and they coordinated their speeches so that each of them covered a different aspect of the program.

And Brady made sure supervisors heard from the children, by having supporters read comments from their audio testimony.

Molly Pell of Fairfax spoke about adopting one of the children in the program, and included the comments of a youth she mentored

“None of us in this room can fully understand what Families4Kids means to the youth involved, but I believe one of our youth stated it best, when she told us:

‘[If I didn’t have FF4Kids], I would lose my mind … I would lose my sanity. I wouldn’t be able to function much. Cause even now I don’t have very much. I get teased on at school. I get teased at the place where I’m supposed to call home. If I lost here … it would be like there was no reason to do anything anymore.’

In their short lives, so much has been taken from these youth. Please don't take away Fairfax Families4Kids,” Pell said during the hearings.

“We stood together as unified members of the community,” Brady said. “We achieved a stay of execution during those budget hearings in 2010.”

Being Part of the “Family”

Brady is an award-winning photographer whose images have appeared in many publications, including “The Washington Post,” “NYTimes.com,” “Washingtonian” magazine, “Children's Voice” (the magazine of the Welfare League of America) and “O Magazine.”

She is justifiably proud of her work, and will talk about it when prompted.

But she quickly steers the conversation back to the children, and how much difference mentors make in the lives of foster children. What she is not always quick to talk about is that the children in the program consider her an important part of their “family,” too.

During a celebration for mentors last month, Jorge, 17, stood up to address the group: "I don't have a mentor, but Joan is always there for me … I check in with her and she checks in with me, nagging me about school and work,” he said. “I know she cares.”

“Honestly, I probably am in touch with him every week-and-a-half, and I think he usually checks in and when I respond, I do totally nag,” she said, laughing. “Ok, I do follow the kids on Facebook, so occasionally I check in to admonish, but it's not much.

“But see. Just that tiny bit of interaction he has with me—something that I hadn't even noted—makes a big difference for him. It just takes a tiny bit of attention to make a difference,” Brady said. “That’s why I want the story to be about what’s really important: the children, definitely not me … ”