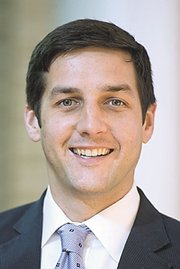 Alexandria — Jeremy R. Moss, an associate with MercerTrigiani law firm, has been named a 2013 Rising Star by both Virginia Super Lawyers and Washington, D.C. Super Lawyers.

Moss was previously honored as a 2010 and 2012 Virginia Super Lawyers Rising Star, however, this is his first-time recognition by Washington, D.C. Super Lawyers.

As a Rising Star, Moss joins a list of young lawyers who have demonstrated excellence in practice for 10 years or less. Selection is based on peer nomination and independent research of candidates. In addition to publication in the July 2013 edition of Virginia Super Lawyers Magazine, the Virginia list will appear in the July 2013 issue of Richmond Magazine and the District of Columbia list was included in the May 2013 issue of Washington Post Magazine.

Moss, a community association law attorney based in the Alexandria office, also has received extensive industry recognition. In 2008 the Washington Metropolitan Chapter of Community Associations Institute presented him with the Rising Star Award and in 2011 he was named Educator of the Year.

He received his law degree in 2007 from the Columbus School of Law of The Catholic University of America and is a 2003 graduate of Virginia Polytechnic Institute and State University.

For more information on MercerTrigiani or the practice of community association law, visit www.MercerTrigiani.com.