Should the Yellow Line Be Extended South Beyond Huntington to Lorton?
Votes

Should the Yellow Line Be Extended South Beyond Huntington to Lorton? 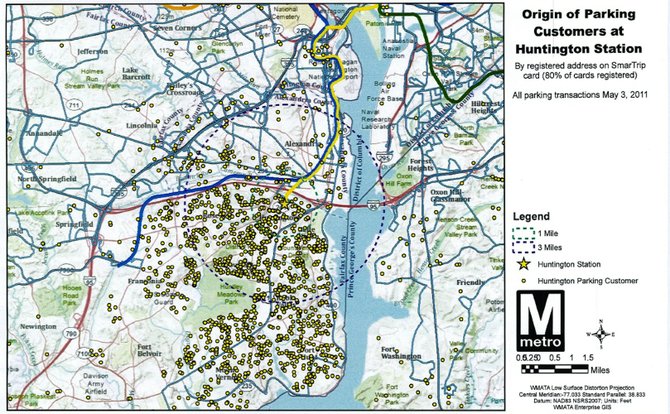 Should the Yellow Line be expanded beyond the Huntington Metro station?

That's a question at the heart of a multimodal transit analysis now being conducted by the Virginia Department of Rail and Public Transportation. The answer to that question, which will come in the form of a recommendation next year, will have drastic consequences for land-use decisions up and down the Route 1 corridor for years to come. Will the stretch of land remain suburban sprawl with big-box stores and huge parking lots, a corridor that would call for bus-rapid transit or perhaps a streetcar system? Or will it be transformed into a high-density, mixed-use megalopolis similar to Rosslyn or Ballston in an effort to finance a Metro expansion?

"That's why we moved away from the city," said Jayna Reeder, Virginia Hills resident. "So we don't have to have big buildings around our neighborhood."

Others aren't so sure. Although the corridor has long been known as a traffic-clogged road of strip malls and cheap hotels, some see a future that's much more urban. The tension is perhaps most palpable between the Costco near Gum Springs, which fits the traditional model of a suburban big-box store with a huge parking lot. About a mile away is the Beacon of Groveton, a mixed-use development that is the kind of development one might see near a Metro stop in Arlington.

"If you want a sleepy, quiet neighborhood, go to, like, the suburbs of Richmond," said James Sawyer of Occaquan. "Don't be in Northern Virginia."

THE TENSION between urban and suburban is nothing new for the Route 1 corridor, which has long been the source of controversy between those who want to urbanize southeast Fairfax County and those who want to avoid adding yet another dense urban corridor to the region. The analysis now being conducted by state officials will consider several different options for Route 1 — widening the road; light rail such as streetcars; heavy rail such as Metro, and bud-rapid transit such as the one now under construction in Alexandria.

"Route 1 in Northern Virginia has long been known as a highly congested roadway and any resident of the area knows well the delays that are frequent and all too common," said Gov. Bob McDonnell in a written statement announcing the study last month. "This analysis will enable DRPT to take a comprehensive look at the traffic situation and determine what steps would best help to alleviate congestion and improve the daily lives of those who live and work in the area."

Many people see the study as an opportunity to validate their vision of the future of the corridor, although this time it's a zero-sum game rather than a debate about the future. The highly coveted recommendation is expected to create a road map for the future that will have drastic land-use implications for Fairfax County officials, who will move toward a future that is either something similar to Costco or something more akin to the Beacon. The question for Mount Vernon residents is whether or not they will support the kind of density needed to create the population needed to justify constructing an expanded Metro system.

"You need the density to have the density riding on the train to support the operating cost," said Del. Scott Surovell (D-44), one of the chief advocates of extending the Yellow Line south along the Route 1 corridor. "The transportation professionals I've talked to say that the existing authorized densities could support it, and that if the comprehensive plan was amended to allow some more density that would support it even more."

AT THE HEART of the debate is what kind of future residents of the Mount Vernon area are willing to accept. Many neighborhood leaders say they don't want to live with the kind of density that exists along Metro lines, which is essentially an argument for bus-rapid transit or some kind of light rail. Others say that the ease and convenience of the Metro system is too good to pass up, especially considering long-term population trends in the region. Some supporters believe that opponents simply need to face reality.

"I guess city growth is just catching up with them, and they are moving further out," said John Smith of Huntington. "It is kind of unfair if that is the reason they bought right there a couple of blocks off of Route 1."

Perhaps the biggest opponent of expanding the Yellow Line south is Lee District Supervisor Jeff McKay, who has publicly disagreed with those who have been pushing for Metro expansion for years. McKay says his constituents bought into quiet suburban neighborhoods, and adding massive density to support Metro expansion would be an unacceptable bait and switch. Now, finally, the transit study will offer a definitive answer as to what kind of transit the corridor can support.

"We don't have the density to support heavy rail," said McKay. "Nor is there the appetite to approve the enormous increase in taxes to finance a rail line."

EVEN SUPPORTERS of Metro expansion say financing the effort would be tricky, although some ideas have emerged as potential solutions. One would be trying to get money from the federal government, a central aim of the transit study now underway. Another would be that the Army could contribute some funding considering that Fort Belvoir employs more people than the Pentagon. Another potential option would be the creation of a special tax district for properties that are near the new Metro line.

"To sit around and say the money is not there today is an incredibly shortsighted point of view," said Surovell. "I want to have a plan in place so when the money is available, we are at the front of the line and not saying it's going to take us 10 years to design this."

Opponents of heavy rail on the corridor say they hope the study will finally provide a definitive end to any discussion of Metro on Route 1.

"I'd hate to see us put all our eggs in a heavy rail basket," said McKay. "I think we can do much more with a BRT system that could accomplish many of the same goals and prove us with a flexible transportation system on the highway for years to come."