A Fairfax man who worked as a local swimming coach and instructor has been arrested and charged with molesting a 7-year-old girl. He is Eduardo Requejo, 23, of Warwick Avenue. Fairfax County police say the alleged crimes did not happen at his worksite; the child is an acquaintance and was not one of his students. 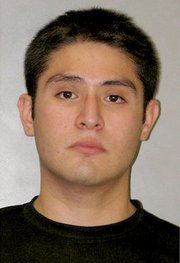 Police received a complaint July 3 from the girl’s mother, alleging that her daughter had been inappropriately touched by Requejo on several occasions. Detectives began an investigation and, on Monday, July 15, they charged him with two counts of aggravated sexual battery.

He turned himself in to police at the Adult Detention Center, where he’s now being held without bond. Requejo worked as a swimming instructor at the Oak Marr Recreation Center in Fairfax since 2005. He’s also been employed as a swim coach throughout the Fairfax community.

On Tuesday, July 16, county Park Authority COO/Deputy Director Sara Baldwin sent out a letter to RECenter patrons saying that Requejo has been “a seasonal employee with the Fairfax County Park Authority since 2005 without incident and with successful passage of required and appropriate criminal background checks.”

However, she stressed, “In response to these allegations, this instructor is no longer scheduled to work for the Park Authority. Police report that no information has been developed which would indicate any victims or misconduct occurred at Park Authority facilities.”

Noting that more than 2 million people enjoy the RECenters annually, Baldwin said the safety and security of all RECenter patrons, particularly children, is the Park Authority’s top priority. “As always, we encourage you to report any conduct that makes you or your child uncomfortable,” she added. “Please discuss this issue with your child and remind them about the basic tenets of personal safety.”

Requejo was arraigned Tuesday morning and is scheduled for a preliminary hearing July 25 in Juvenile and Domestic Relations Court. While detectives believe these were isolated incidents, anyone with information regarding Requejo is asked to call Crime solvers at 1-866-411-TIPS/8477, e-mail www.fairfaxcrimesolvers.org, text “TIP187” plus a message to CRIMES/274637 or call police at 703-691-2131.