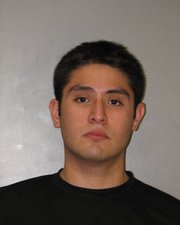 A Fairfax man charged with sexually molesting a child pleaded guilty last week in Fairfax County Circuit Court. He is Eduardo Requejo, 23, of Warwick Avenue, and he’ll be sentenced in February.

He worked as a swimming instructor at the Oak Marr Rec Center in Fairfax since 2005 and was also a swim coach throughout the Fairfax community. But on July 15, police charged Requejo with two counts of aggravated sexual battery.

However, authorities said the offenses didn’t happen at his worksite; the child is an acquaintance and wasn’t one of his students. The victim is a 7-year-old girl, and police said the offenses occurred on March 1 and July 2.

Last Thursday, Oct. 10, Requejo pleaded guilty to two amended charges of committing an indecent act with a child; both are still felonies. Judge Brett Kassabian then set his sentencing for Feb. 21, 2014.