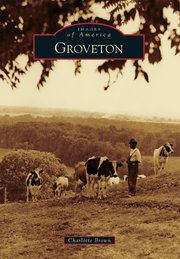 Mount Vernon — Longtime Groveton resident Charlotte Brown's book "Groveton" uses both stories and pictures from local residents and business owners to provide readers with a colorful and informative look at the history of the area.

Brown was inspired to look deeper into the history of the close-knit farming community after doing research on her family's genealogy with her mother and grandmother as well as through her own research on Groveton's first church, St. Mark's Episcopal Church.

After a friend sent her an email that Arcadia Publishing was looking for information on additional areas including Groveton, she contacted them. She received a book contract in February 2012 and began her research about a month after that.

The first half of the book highlights Historic Huntley and the early farming families in Groveton while the latter half covers Fort Belvoir, formerly known as Camp Humphries, and the Groveton fire and police departments and various local businesses.

Susan Hellman, director of the Carlyle House, worked with Brown on the book when she worked in the Virginia Room of the Fairfax County Library.

Penn Daw resident Barbara Keck, who knows many Groveton residents, also contributed photos and postcards of local businesses featured in the book including Deavers Motel, Totem Pole, and the Wagon Wheel. She hopes that readers will learn some of the area's early history and gain a different outlook on Groveton.

Although this is her first book, Brown stated that organizing and writing "Groveton" was much easier because of all the stories and pictures she obtained from local residents and businesses.

One of her favorite photos is of the famous Dixie Pig barbecue restaurant. The restaurant was located on Route 1 — where the Rite Aid now stands — until it closed in January 1996.

"They had some of the best barbecue. Folks are still looking for that barbecue," she said.

In addition, Brown traveled to Port Royal, Va. to visit with another long time resident Dorothy Alcorn Butt who lived at Huntley along with her three siblings and her parents Gladys and Earl Alcorn who took care of Bert Harrison who owned a dairy farm in Groveton.

Brown also spoke with Ransom Jerome Amlong, the son of Colonel Ransom George Amlong and Marguerite M. Kennedy, who has lived in Huntley since his parents moved there in 1946.

The Amlong family purchased Huntley in 1948 and lived there until the family was transferred to Belgium. They returned after the colonel retired in 1953 and remained there until his wife's death in 1972.

Another local resident who contributed to the book is Jane Puletz. She shared a number of pictures of her family and childhood stories about her grandfather's farm with the author.

According to Puletz, Groveton's is a different from other communities in Northern Virginia because "many of its families have remained in the area for a lifetime" and "the fact that George Washington owned land here."

Through her research of Groveton business owners and families' genealogy, Brown found out that she was related to a majority of them.

"One thing I was surprised to learn was that we had a lot of cousins here," she said.

Brown also was able to find some never before seen photos of her father, Alvin Upton "Brownie" Brown when he was a young man after speaking with her cousins.

"Groveton is a diverse community where people still seem to care about each other. Most of the people who settle here tend to stay and, even if they don't, their children tend to come back," she said.

Proceeds from "Groveton" go to support the Friends of Historic Huntley. It can be purchased at Amazon.com or through Arcadia Publishing website.

After retiring from Securities and Exchange Commission, Brown moved into her childhood home in Groveton and lives with her sister, Bonnie. She enjoys gardening and is active with the Groveton Civic Association.