Huntley Opens with a Flourish
Votes

Huntley Opens with a Flourish

Alexandria mayor built the home in 1825. 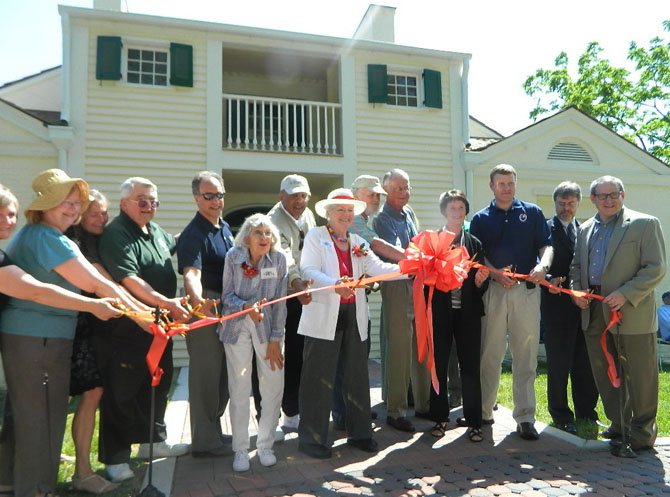 The ribbon-cutting, led by Barbara Ballentine and Board of Supervisors Chairman Sharon Bulova, took place in the back of the house where the ground is level. 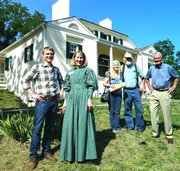 Artist William S. Amlong was joined by his brother, Ranson, right, and Sue Howard, who lived at Huntley with her daughter Susan in the 1970s. At left are historic interpreter Geoffrey Cohrs and Erica Hershler who is wearing an 1830’s house dress.

United in their salutes to Huntley’s beauty and hilltop view reaching to the Maryland shore, the speakers voiced their appreciation for the contributions of the Friends of Historic Huntley — Barbara Ballentine, president — who worked with the county to bring the $2 million restoration to fruition.

During the opening day’s festivities, a surprise came with the unannounced visit of the Amlong brothers, the last Huntley residents whose family sold the property to the county in 1989 after occupying the home for 40 years. Park Manager Kevin Munroe introduced and invited them to join in the ribbon cutting, providing them with gold scissors.

The younger Amlong brother, William S. Amlong, 74, is a landscape painter whose paintings hang in galleries and museums in Washington, D.C. and Richmond. While a young man living at Huntley, he painted old Alexandria homes and buildings like Christ Church. Signed simply “Amlong,” these paintings now hang in Alexandria private homes. He also painted Huntley.

Amlong, joined by his older brother Ranson, 79, a West Point graduate, not only wanted to attend the ribbon-cutting but wished to clear up a misunderstanding printed in Alexandria newspapers reporting the house as abandoned and in poor condition when the county bought it. Instead, he pointed out, the house was restored and in excellent condition but the county lagged in providing security and the home was severely vandalized.

Said Munroe, the park manager, “It’s hard for me to speak to the details of when the house was first acquired, but we’re incredibly grateful to the Amlongs for keeping the house in such good condition.” He said the county sometimes must rush to purchase historic property before it’s sold off to developers, but then there can be a lag in raising funds to prepare the house for the public.

Munroe also said he’s looking forward to involving the Amlong brothers in developing the account of Huntley’s history. The home, built circa 1825, was the summer residence of Alexandria lawyer and mayor Thompson Mason and his wife Betsey. Mason was born at Gunston Hall.

Among other visitors Saturday was Linda Miner. In 1974, when a student at Walt Whitman Middle School, she and her friend Patty DaVeau knocked on the door inquiring if they could visit and take pictures for a school project. William Amlong welcomed them and showed them around. The report, which for reasons unknown was graded a B, still exists, said Miner.

Another visitor was Dwight Hulvey who as a young boy in 1958 delivered the Washington Post, Evening Star and Alexandria Gazette to the home. He recalled the family’s big dog he was careful not to annoy.

Visiting also was Tony Case, owner of Hybla Valley Nursery, who as a young boy was intrigued by the home but stayed off the property because it was private and said to be haunted.

Attending as well was Erica Hershler, a member of Friends of Historic Huntley, who came wearing a reproduction of a house dress which might have been worn by Betsey Mason in the 1830s. The dress, a calico-flowered print with a high collar and intricately-pleated front, was made by her mother Martha Armbrust. If she is chosen as one of the tour guides, she said she may wear the dress when giving her tours.

Preparing for the Saturday tours starting June 11 is Geoffrey Cohrs, historic interpretor and site coordinator, who graduates from George Mason University in December 2012 with a master’s in American History/Applied History and Digital Media. He explained that in addition to Huntley’s exterior walls, the interior walls are also brick to keep the house cool in summer and warm in winter.

The walls of the north wing are left incomplete so visitors can view the inner construction.

The home is not furnished because the original furnishings are not yet known. Said Munroe, “We want to be very careful not to create a fake furnished site.” Instead the sunny, breezy uncluttered rooms feature display cases of artifacts and accounts of Huntley history with photographs.

For example, it’s noted that Betsey Mason preferred their Alexandria home to Huntley, which was isolated in the country. Thompson Mason preferred otherwise, reveling in the rustic farm property which reminded him of his childhood home, Gunston Hall.