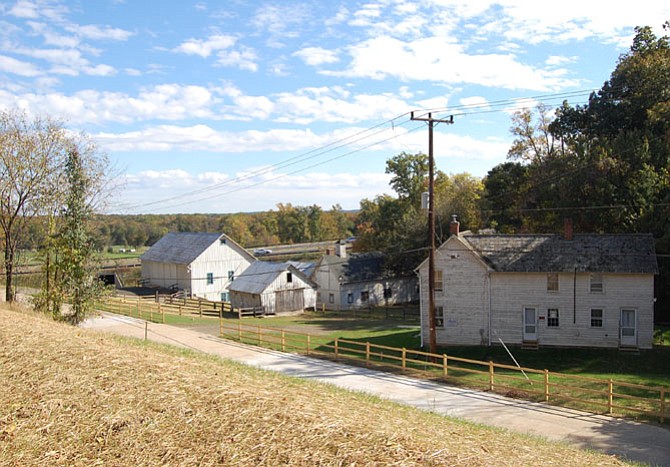 The Woodlawn barn complex in its current configuration. At right is the historic Otis Mason House, which the Federal Highway Administration moved from its nearby original site. At the far left is the historic “bank barn,” so named because of its location on the sloping bank of the hill. That allows simple access to both the upper and lower levels. The smaller structure in the middle is the corn crib, with the dairy between it and the house. The new Route 1 bypass is in the background. 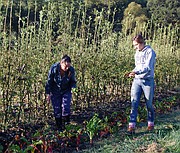 This 2013 aerial imagery shows the barn complex before the rerouting of Route 1. The large indoor riding facility/stable was razed during the highway relocation. The former Woodlawn Baptist Church is now the Pillar Church of Woodlawn. The former site of the Otis Mason House is also noted. The driveway between the complex and the former Route 1 segment is a remnant of a 350-year-old overland route once called the Potomac Path. The U.S. Army paved part of it with concrete during World War I.

roadway have seen a change in activity on the grounds of the National Trust’s Woodlawn. The expanded fruit and vegetable production in the former Woodlawn Stables pasture that Arcadia Farm began in the spring of 2016, however, is only the tip of the iceberg lettuce when it comes to new initiatives at Woodlawn.

The National Trust for Historic Preservation, which has operated Woodlawn since 1951, has developed a proposal to transform parts of the 126-acre Woodlawn property into a “shared-use” facility. Key to this is the fusion of historic preservation activities and buildings with compatible commercial activities.

“We want to further engage the public regarding the history of the Woodlawn area and find a way to serve the surrounding community,” said Katherine Malone-France, the Trust’s vice president for historic sites. “And the way we think we can best do that is by using an operating model in which there is a combination of nonprofit uses that are paired with mission-oriented, income-

This 2013 aerial imagery shows the barn complex before the rerouting of Route 1. The large indoor riding facility/stable was razed during the highway relocation. The former Woodlawn Baptist Church is now the Pillar Church of Woodlawn. The former site of the Otis Mason House is also noted. The driveway between the complex and the former Route 1 segment is a remnant of a 350-year-old overland route once called the Potomac Path. The U.S. Army paved part of it with concrete during World War I.

The National Trust is in the process of preparing an application for a Fairfax County special exception permit that will authorize additional activity on the Woodlawn grounds.

At the core of the proposal is the designation of a cultural center, one with initiatives to support a sustainable program of public engagement. Using the site’s unique history, the center would provide the community with a nexus of history, culture, food, “agri-tourism” and sustainable agriculture. However, in the words of Malone-France, “Woodlawn will remain a public historic site. But it will embrace its complex history while representing best practices in historic preservation and public interpretation.”

Since many details have yet to be finalized, Malone-France pointed to a National Trust property in Monterey, Calif., that the Trust is using as a model for the Woodlawn project. The historic Cooper-Molera site in the city’s Old Monterey sector consists of old barns, two adobe homes built by the Cooper and Diaz families, a museum, corner store, warehouse and other buildings. The houses date to the 1827, with other structures added through the early 20th century.

Construction is ongoing to adaptively reuse several of the historic structures as a restaurant, a café/bakery and an event center that will host weddings and concerts. The buildings are connected by gardens and public spaces, and new small commercial kitchens are under construction. The museum in the oldest adobe residence will be refurbished and be integrated with the commercial activities.

The National Trust’s website for Cooper-Molera describes the origin of the undertaking. “After extensive engagement with local stakeholders, the National Trust developed a concept designed to bring new life to Cooper-Molera: a ‘shared use’ model for the property that includes an active program of historic interpretation by the National Trust centered in the Cooper and Diaz Adobes, along with compatible commercial uses appropriate to the historic setting.”

The Trust is pursuing three goals at the Monterey site: Create distinct

At Woodlawn, the Trust will mimic the Cooper-Molera development process by employing the former Woodlawn Stables barns and the relocated historic Otis Mason house. The Federal Highway Administration moved the house from its original site during the realignment of Route 1 through the property. This cluster of buildings will serve as the center of the shared-use program and their history goes back to the mid-1800s.

Two Quaker families from New Jersey, Troth and Gillingham, bought Woodlawn Mansion and 2,030 acres of land in 1846, largely for the timber. As lumber merchants, they supplied materials to Philadelphia shipyards for new ship construction. In 1850, John and Rachel Mason — not related to George Mason of Gunston Hall — bought the property from the remaining owners, the Troths. After the Civil War, the Masons sold about 63 acres to one of their sons, Otis T. Mason, a scientist at the U.S. National Museum (later Smithsonian) in the District.

According to historian Susan Hellman, a former acting director of Woodlawn and the current manager of Alexandria’s Carlyle House, evidence points to a post-1873 date for the Mason house construction, not the 1854 date that others have suggested for the first section of the home. The house used to stand immediately south of the Woodlawn Stables compound.

The stables complex dates to 1913 when a previous Woodlawn owner, Elizabeth Sharpe, built the historic “bank barn,” dairy shed, corncrib, stables and associated structures. Woodlawn Stables used the buildings, along with newer structures, until the re-routing of Route 1 forced the business to relocate to Jeffersonton, Va. [See the accompanying images of the complex before and after the highway changes.]

“We want to engage the local population by creating a place that local people want to visit,” Malone-France said recently. “We want to meet the community’s needs by providing fresh fruit and vegetables. Also, it will be a great place to eat and enjoy the bounty of Virginia’s agriculture and learn about the property’s rich agricultural history. The project will not only be connected with the history of this place, but also preserve Woodlawn’s open space in a densely developed corridor.”

Malone-France also said that commercial partners have yet to be identified, but activities will be similar to the Cooper-Molera site — restaurants, fresh-food market and gathering places. There will be no change to the operations of the Woodlawn mansion or the Pope-Leighey House.

On a pleasant, early-October morning, three farmworkers bent to the task of harvesting chard by hand. They plucked the purple stalks, tied four or five together, neatly trimmed the ends and placed the bundle in a plastic bin. The three women worked steadily in the shadow of adjacent rows of seven-feet-tall okra stalks that partially blocked the morning sun, with each worker seemingly unfazed by the roar of traffic on nearby Route 1.

Production farm manager Katherine Collins occasionally spoke with the two others – part time worker Sophie Spriggs of Alexandria and volunteer Chantal Zen Broeder from Arlington. Collins and Spriggs work for Arcadia Farm, a non-profit organization created by Washington, D.C. restaurateur Michael Babin in 2010. A year later, Arcadia began a small educational and sustainable farming operation next to the Woodlawn mansion called the Hilltop Farm. The size of Arcadia’s operation increased dramatically in late 2015 when the National Trust leased the former Woodlawn Stables acreage to Arcadia. The organization broke ground on what Collins calls the “lower” or Dogue Run Farm in March 2016.

The crop production and educational uses at the 2.3-acre Dogue Run operation resulted in a banner year for Arcadia in 2016. Collins and her volunteer crew of 67 harvested nearly 21,000 pounds of produce from 23 crops and 56 varieties. Three thousand pounds of watermelon boosted the total, but 3,800 pounds of tomatoes, 2,500 pounds of summer squash, and 2,600 pounds of cucumbers formed a sizeable harvest. Other vegetables included basil, green beans, scallions and turnips.

Last year Arcadia donated some of the produce to United Community Ministries and other good-works organizations, sold some to restaurants, and, most importantly, produced 82,000 servings of fresh and healthy food for underserved neighborhoods. Additionally, the two farms hosted field trips for 1,450 students from 24 schools, and farm staff and volunteers visited 10 schools and talked to 1,000 children. All in all, Collins and her helpers quadrupled Arcadias’ annual production from 2015 to 2016.

During the 2017 season, Arcadia harvested 27,000 pounds of produce, up 6,000 from 2016. The increase came from the efforts of more than 100 volunteers who contributed over 2,000 hours of labor at Dogue Run Farm. Pam Hess, Arcadia’s executive director, said the 2017 effort translates to 113,000 servings of fresh fruits and vegetables.

A facet of Arcadia’s program is the Mobile Markets initiative, which Arcadia’s website describes as “farm-stands-on-wheels that distribute local, sustainably produced food to underserved communities in the Washington, D.C. area.” A converted, lime-green school bus regularly visits low-income and “food-insecure” neighborhoods to sell high quality, affordably priced farm products. Included are not only produce from the Woodlawn operation, but also goods from other area farms — grass-fed and pastured beef, pork, organic milk, cheese, handmade bread and honey. Arcadia reasonably prices the produce and accepts food stamps. During this year’s season, the Mobile Market regularly has visited 13 locations in the District and one in Falls Church, Va. The program has delivered 75 percent of Arcadia’s 2017 production to those communities.

Also, as reported in the Gazette last June, Arcadia trains military veterans in the science and business of farming. Two programs are available: salaried fellowships for on-site, hands-on learning; and a “reserve” option in which enrollees work on the farm once a month. Arcadia’s hope is to help replenish the nation’s decline of people working on small farms.

Arcadia is planning for an onsite farm stand next season to be overseen by LaRon Murrell, the Hilltop farm manager and a U.S. Army veteran, further binding Arcadia to the neighborhood.

Arcadia Farm, Woodlawn and the National Trust have created an agricultural environment that has parallels to that of dozens of Quaker families who moved to the area after the Troth-Gillingham purchase of Woodlawn in 1846. The Friends were intent on creating an agricultural society that wasn’t based on slave labor. They started myriad small farms, opened and staffed schools, started businesses, operated a shipyard at the mouth of Accotink Creek and founded the Woodlawn Horse Company to protect residents from horse thieves. The success of the Friends revitalized southeast Fairfax County, and Arcadia and the National Trust are bringing those accomplishments back to life at Woodlawn.