One Dead Dog is One Too Many
Votes

One Dead Dog is One Too Many 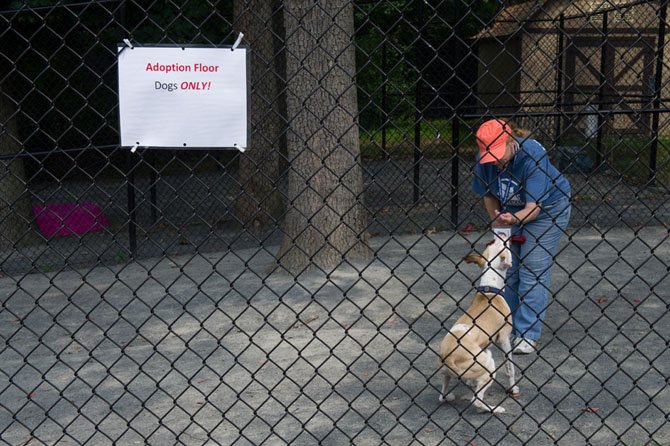 A Fairfax County Animal Shelter volunteer plays with a dog in a play yard designated for dogs that have not been exposed to the upper respiratory infection that has forced the shelter to temporary halt the intake of dogs on July 27. Photo by Deb Cobb. 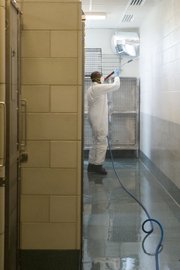 Dealing with an outbreak of upper-reparatory infections in the dog population, a staff member at the Fairfax County Animal Shelter power washes the walls of one of the kennel areas on July 27.

In an effort to deal with an outbreak of a yet-unidentified upper respiratory infection that has resulted in the death of one dog and sickened a dozen more, the Fairfax County Animal Shelter has temporarily suspended the intake of owner-surrendered dogs as of Friday, July 27 until the shelter can be decontaminated and sanitized. Owners wanting to surrender dogs are being sent to other shelters.

Concerned that the infection might be Canine Influenza—H3N8, or “dog flu”—the shelter has implemented stringent containment procedures to isolate the actively ill dogs and those that have been exposed, and begun to decontaminate and sanitize the shelter.

“One dead dog from this is one dead dog too many,” says Fairfax County Animal Shelter Director Tawny Hammond. “Every life matters to us. We are fortunate to have a new facility with multiple ventilation systems and kennels which allows us to contain, isolate and treat the situation appropriately and effectively.”

While shelter staff await test results to identify the infectious agent, they are actively seeking dog-less foster families to host some of the 29 dogs impacted by the infection. “The best thing for exposed dogs would be to go into a foster home with no other pet where they can be cared for in a home environment until there are no other sick dogs in the shelter,” says Kristen 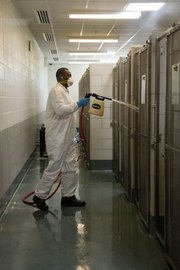 On July 27, a Fairfax County Animal Shelter staff member, dressed in a special suit uses a combination of cleaning agents to decontaminate floors, walls, cages and every “nook and cranny” of the shelter in response to an outbreak of a yet-unidentified upper respiratory infection among its dog population.

Auerbach, director of communications for the Shelter.

Outbreaks like these are not uncommon in a shelter situation with so many animals in close quarters. Hammond doesn’t want the public to be afraid, “We are using best practices to deal with the situation.” But she notes, “It’s like changing a tire on a moving car. We’re in the business of re-homing animals while we are dealing with this.” Her message to the community: “There are many animals—cats, rabbits, guinea pigs and others—needing homes. Come on down, we’re still open!”

Unless the exposed dogs can be put in foster homes, they will remain at the shelter in isolation until the last sick dog has been asymptomatic for 10 days—or “10 days after the last cough.” Once the test results are in mid-week, the shelter veterinarian and staff will reassess the situation and the containment protocols. Once the shelter has been appropriately decontaminated, they will resume accepting owner-surrendered dogs.

Police Animal Control operations continue as usual, any dogs found as strays or seized are being kept separate from the exposed dogs.