The members of the Northern Virginia Transportation Authority listen to testimony during the public hearing portion of their meeting on July 24. Twenty-one speakers addressed the Authority before the members proceeded to vote on a list of transportation projects to be funded and initiated in FY2014.

“Tonight we acted to address one of the greatest threats to our region: Congestion.” So spoke Marty Nohe, chairman of the Northern Virginia Transportation Authority (NVTA) and Coles District supervisor for Prince William County. Despite numerous calls to slow down the process by speakers at the public hearing before the Authority, on Wednesday, July 24, the NVTA approved the FY2014 proposed regional multimodal project list as presented and vetted by the NVTA’s Project Implementation Working Group (PIWG) headed by Authority member (and Arlington County Board Member) Christopher Zimmerman.

“NVTA’s approval … is a great first step toward improving transportation in Northern Virginia,” stated Fairfax County Board of Supervisors Chairman Sharon Bulova in a press release. Bulova, who represents Fairfax County on the NVTA added, “Infrastructure improvements are critical to the continued success of our region. This initial package of projects will make a difference in people’s lives across the region.” The Authority approved first year Pay-As-You-Go projects valued at $116 million, as well as voting for a bond package to fund an additional $93 million worth of projects.

The NVTA was established by the General Assembly in 2002 to provide a common voice on transportation for the counties of Arlington, Fairfax, Loudoun and Prince William, as well as the cities of Alexandria, Fairfax, Falls Church, Manassas and Manassas Park. Their mandate includes developing immediate and long-term plans and selecting projects that address the transportation needs of the entire region. Since its creation, there have been plans aplenty, most recently revised and published as TransAction 2040 with page upon page of proposed transportation improvements. The only thing missing was how to pay for the enormous project wish list contained in the well-researched and presented plan.

THE PASSAGE of HB2313 earlier during the General Assembly session, with a new sales tax and a variety of other taxes and fee increases earmarked specifically for transportation, finally gave the NVTA, and the residents of Northern Virginia, the means to start tackling the area’s congestion problems as a whole, rather than in a piecemeal fashion. An estimated $1.9 billion will be dedicated to Northern Virginia transportation needs over the next six years, with 70 percent of the funds to be allocated by the NVTA for regional projects, and the remaining 30 percent going directly to the individual jurisdictions for local projects. 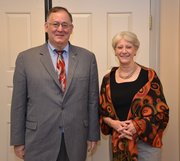 Matthew Kahn, broker/owner of Falls Realty in Falls Church, and Mary Beth Coya, senior VP, Public & Government Affairs for the Northern Virginia Association of Realtors. Kahn spoke on behalf of the organization, acknowledging that traffic congestion was of primary concern to their members and to prospective buyers into the area, but urged the Authority to use the newly available funds “wisely, not quickly.”

When it became clear that the NVTA would actually be able to fund and initiate transportation projects as early as July 1, the start of Fiscal Year 2014, the Authority went into high gear to solidify plans and solicit public opinion. Hearings were held throughout the region and the public was given opportunities to study the proposals and comment by testimony before the Authority, and by other written and electronic means. Over 200 public comments were received and considered by the PWIG between June 6 and July 22. On the night of the final public hearing, an additional 21 speakers added their testimony before the Authority.

At the previous public assembly in June, many of the speakers used their allotted time to either praise or protest specific proposals. At this pre-vote public hearing there was acknowledgement of the efforts of the Authority and the many others who worked to obtain this funding and to bring the projects to the table, but a large number of speakers recommended that the Authority not approve the project list without further study and consideration.

Virginia Delegate Bob Marshall (R-13) was one speaker who advised a slower approach and a clearer explanation of how the projects were chosen and vetted. “I have re-read the law … the NVTA is not required to spend any funds made available in fiscal year 2014 in the year of 2014. “Marshall’s conclusions suggested that the Authority consider saving funds toward more long-range projects that “could better use the money in terms of efficiency and moving more people.” Marshall also indicated that in a review of the documents on the NVTA website he was unable to find any clear objective scoring by which each project was selected. (Member Zimmerman later remarked that explanations could be found in the appendices of the TransAction 2040 Plan.)

Delegate Jim LeMunyon (R-67) echoed some of the sentiments expressed by his colleague. He praised the cost per benefit substantiation of two of the proposed projects but stated his concern that 95 percent of the proposals did not carry the same level of analysis. “It’s a qualitative ‘yeah, it’ll get traffic moving a little bit better.’” When it comes to stating the benefits of a project, LeMunyon says the Authority is missing a word. “It’s not how will the project reduce congestion. It’s how much,” he said, suggesting that the Authority consider these analyses before approving their final project list. “Until you answer the ‘how much’ question I don’t think you can comply with the law.”

Leo Schefer testifies before the Authority on behalf of the Washington Airports Task Force. The entire hearing, as well as the open session of the NVTA’s meeting, was broadcast on City Channel Station 12, and later uploaded to YouTube. A link to the YouTube video can be found on the NVTA website: www.thenovaauthority.org.

QUESTIONS WERE RAISED about the “regionality” of some of the projects, like bus shelters and improvements to pedestrian pathways. Eileen Curtis, representing the Dulles Regional Chamber asked that a formal definition of the term “regional” be added and applied to the workings of the Authority. Brian Gordon, representing the Apartment and Office Building Association of Metropolitan Washington also called for additional project selection criteria going forward to ensure that chosen projects were truly regional in their scope and impact, as did Leo Schefer, president of the Washington Airports Task Force. Others, like Mark Scheufler of Manassas Park, commented on projects that appeared to benefit locales outside the Authority’s jurisdiction. “Why is the NVTA accelerating the schedule of a funded VDOT project to help a jurisdiction that is not in the NVTA tax district?” questioned Scheufler. “If these are the best projects in the queue,” he added, “I am not sure why there was such a dire need to raise the sales tax in Northern Virginia.”

Several speakers also cautioned the Authority on its plans to fund projects through a bond package. David Birtwistle, CEO of the Northern Virginia Transportation Alliance urged the Authority to wait until long-range plans were reviewed and better defined as regionally significant before moving forward with the issuance of bonds.

When the last speaker concluded his remarks, the Authority listened to presentations from its working groups and consultants. Zimmerman, as head of the Projects Implementation Working Group, took this time to review the history of the NVTA and to defend the regionality and selection process of the projects recommended for implementation in the first year. Zimmerman referred to TransAction 2040, the Authority’s long term planning document, saying that it contained within its technical indices the quantitative measuring methods applied to the more than 200 projects outlined in the plan, with additional information regarding the regional merits of each proposal.

In addition to approving the proposed project list in its entirety, the NVTA also approved the funding methods—both Pay-As-You-Go and by Bond as recommended. They approved the authorization for the initiation of a bond validation proceeding, the appointment of the FY2014 Technical Advisory Committee members, bond counsel, and John Mason, former mayor of the city of Fairfax as the interim executive director. Mason had previously served as the Authority’s executive director in 2007-2008.