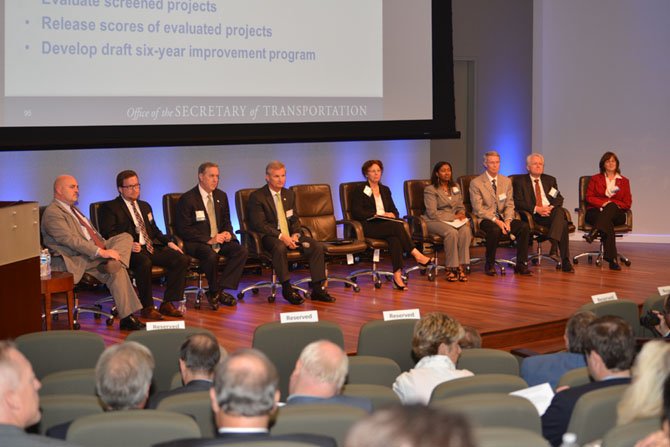 “What You Need to Know about Transportation in Five Minutes or Less” was the working title of this year’s Northern Virginia Transportation Alliance (NVTA) seminar and reception held on Sept. 30 at Capital One’s auditorium in McLean. With the often confusing alphabet soup of Virginia’s transportation-related agencies, organizations, alliances, boards, and commissions it was good that the NVTA meant five minutes per speaker. No one could make sense of the Commonwealth’s transportation current state of affairs, its history, or plans for the future in 300 seconds.

The 10th Annual Northern Virginia Transportation Alliance Seminar and Reception focusing on “Regional Priorities and Prioritization” played to a packed house in the two-level auditorium of Capital One in McLean.

Thankfully, the NVTA gathered the key players from those various organizations and gave each five minutes to make a presentation in keeping with the theme of their 10th Annual Seminar – “Regional Priorities and Prioritization.” The speakers were all recognized authorities on the subject and stayed on point with materials and comments that were accessible to audience members less in-the-know on all of the details of each agency and the projects they impact, as well as the most subject-knowledgeable in the audience. Bob Chase, president of the NVTA, in his role as moderator, for the 10th time, made the introductions, kept the speakers within their time budgets, and directed the Q & A session following the presentations.

According to the NVTA members, the seminar title was carefully chosen. Chase made reference during his opening remarks to a document published earlier this year by the National Capital Region Transportation Planning Board titled “Regional Transportation Priorities Plan” that “listed no actual priority projects. I’m not sure how we get to solving problems if we have no priorities,” said Chase. “The good news is that efforts are underway in Virginia to address this deficiency.”

Virginia Secretary of Transportation Aubrey L. Layne, Jr. was the final speaker of the evening at the 10th Annual Northern Virginia Transportation Alliance Seminar and Reception on Sept. 30. The Secretary received enthusiastic cheers when he mentioned the need for “another crossing of the Potomac.”

ANOTHER REASON why prioritization of projects is critical and was a key focus of the seminar is the passage of HB 2 by the Virginia Legislature earlier this year and HB 599 which addresses prioritization for projects funded through the Virginia Department of Transportation (VDOT). As a follow-up to the historic bi-partisan passage of HB 2313 in 2013, which provided significant state funds for transportation for the first time in 27 years, HB 2, “Provides for the development of a prioritization process for projects funded by the Commonwealth Transportation Board … that shall weigh factors such as congestion mitigation, economic development, accessibility, safety, and environmental quality.” With real money on the table with which to proceed, and a “wants and needs” list for each locale that far outweighs the funds currently or foreseeably available, some scoring method needs to be developed and implemented to ensure that the state gets the best “bang for the transportation buck” from every project chosen. As speaker Aubrey L. Layne, Jr., the Virginia secretary of transportation said, “Accountability was missing from the process.” By scoring each proposed project and benchmarking it to the requirements of HB 2, Layne noted that the selection process would be fairer and more transparent. According to Layne, even projects already underway and those that are exempt from HB 2 should still be examined and scored.

Nick Donohue, Virginia deputy transportation secretary, provided more detail on the HB 2 Process, praising the “remarkable, unanimous, bi-partisan vote” that led to the bill which took effect on July 1. “The process will be developed over the next 12 months by the Commonwealth Transportation Board,” said Donohue, and applied to “projects based on the (planning document) VTrans 2040 needs assessment toward the drafting of a six-year improvement program.” Donohue, as well as several other speakers, also reminded the audience that many of Northern Virginia’s transportation plans had to also take into account emergency evacuations from the District. “It’s just one more of the realities our region faces.”

While there was much discussion regarding future transportation needs for a region that has grown from two million people in 1970 to more than five million today — with growth projections reaching almost seven million by 2040 — a number of the speakers addressed the status of recent projects and those currently in progress, like Helen Cuervo, Northern Virginia District administrator for VDOT. Cuervo reported on the opening in August of three eastbound lanes as part of the Route 50 widening project, with the three westbound lanes on schedule to open in spring of 2015. FY2014 saw more than 670 lane miles paved in our region, with another 826 lane miles scheduled for paving in FY2015. Express Lanes on 95 were also reported to be on schedule for a late 2014/early 2015 opening, running from Edsall Road in Fairfax County for 27 miles to Garrisonville Road in Stafford County. Cuervo also provided updates on improvements for Route 7 and work on interchanges along Route 28 and other highly congested byways. The Express Lane project and other projects noted by Cuervo that extend well into Loudoun and Prince William counties from Fairfax, Arlington and Alexandria all served as prime examples of the “regional” cooperation that the NVTA believes essential to effectively address the transportation woes of Northern Virginia.

Parrish reported that the authority has already approved 34 projects. The first year of approved projects are valued at $209,793,000. He noted that 70 percent of available funds would be utilized for regional projects included in the TransAction 2040 Plan that have been evaluated by VDOT for congestion mitigation or emergency evacuation as called for in HB 599, as well as mass transit capital projects (30 percent would be designated as local funds and distributed to the individual localities for their specific needs). To receive full funding, the localities would be required to enact the local Commercial and Industrial Property Tax at $0.125 per $100 valuation, or dedicate an equivalent amount to the transportation fund.

Other speakers included outgoing WMATA CEO and General Manager Richard Sarles, who was awarded with applause from the crowd when he spoke of Metro’s “Eight Car Train Initiative” to add to the current train length and increase ridership significantly. CEO Doug Allen outlined the plans for Virginia Railway Express’s growth, particularly along 395, 95, and I-66.

SPEAKING OF I-66, no discussion of transportation in Northern Virginia could be complete without someone addressing the problems on the highway that many consider the most congested in the entire region. Charlie Kilpatrick, commissioner of VDOT, presented “I-66: What’s the Fix and When?” Although the plans do seem to take aim at the goal to “improve multimodal mobility along the I-66 corridor by providing diverse travel choices and to enhance transportation safety and reliability,” most of the proposed works from the Beltway to Haymarket will still be a long time coming. Kilpatrick described the vision of I-66 with two express HOV-3 lanes, three non-tolled general lanes, ramp-to-ramp connections and a Rapid Bus Service with direct access opportunities from Park-and-Ride lots to Express Lanes. But even with much planning and preparation already underway, no construction on this project seems likely before 2017 at the earliest.

The Northern Virginia Transportation Alliance (NVTA) is a private sector organization focused on collaboratively developing ways to make better transportation a reality for the region’s citizens and businesses. It leads a coalition of more than 20 major Northern Virginia business organizations, aimed at supporting transportation investments of the greatest regional significance. The presentation materials of the seminar’s speakers are available on the website www.nvta.org, which also contains information on all aspects of transportation in the region and links to related sites for further information.